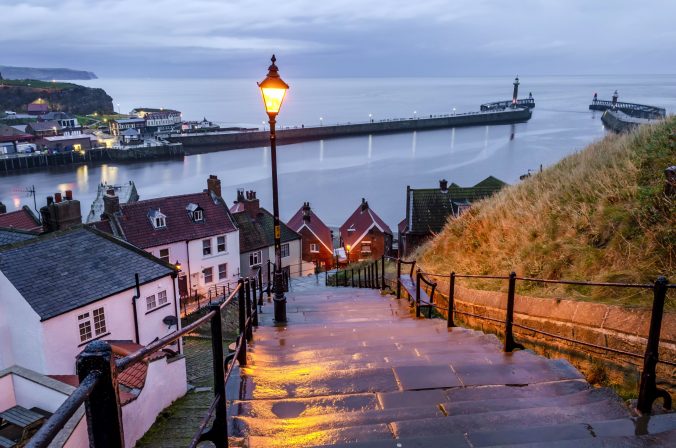 ‘Leaping from wave to wave the strange schooner rushed at headlong speed, swept before the blast…’ 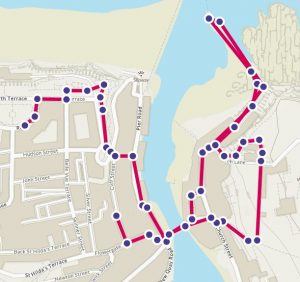 Abraham ‘Bram’ Stoker visited this pretty coastal town regularly between 1890 and 1897, and it became the inspiration for Dracula, first published in 1897. He kept notebooks of his observations that he used extensively in the novel – Coast Guard reports of shipwrecks at Whitby; conversations with seamen about local legends; sketched maps of the town; descriptions of both day and night scenes; and a glossary of the local dialect. He was a journalist by training, and this is reflected in the style of the novel, narrated by means of a series of diary entries, letters, newspaper cuttings and memoranda.

The favoured Gothic literature of the period was set in foreign lands full of eerie castles, convents and caves. Whitby’s windswept headland, the dramatic abbey ruins, a church surrounded by swooping bats, and a long association with jet – a semi-precious stone used in mourning jewellery -gave a homegrown taste of such thrilling horrors.

In 1890, Bram Stoker checked into a guest house at 6 Royal Crescent for his summer holiday break. The landlady didn’t allow guests to remain in their rooms during the day, so Stoker took up exploring the town, and we follow the exact route he would have taken many times during his stay.

The neighbouring address to ‘Bram’s View’, 7 Royal Crescent appears in the novel as the address of Count Dracula’s solicitor, ‘Samuel F Billington’, who arranges for fifty crates of earth from the shipwrecked ship to be transported from Whitby. 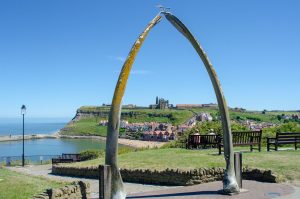 We soon reach one of Whitby’s most distinctive landmarks, the Whalebone Arch, a great spot from which to survey the town. Like the nearby statue of Captain James Cook, who began his seafaring life here, we can gaze across Whitby’s natural harbour framed by dramatic cliffs.

The ‘Screaming Tunnel’, The Khyber Pass

Like many landmarks in Whitby, this passage has become linked to Dracula. Some fans say this is his hideout, where his victims scream as they meet their fate. We can find no direct link to the novel, but it’s still fun to walk through and a good shortcut to the harbour.

During his first stay in 1890, Stoker walked down to the public library (now Quayside, 7 Pier Road). It was here that he found a book called ‘An Account of the Principalities of Wallachia and Moldavia’ published in 1820, recording the experiences of the British consul in Bucharest, William Wilkinson. It mentioned a fifteenth-century prince called Vlad Tepes who was said to have impaled his enemies on wooden stakes. He was known as Dracula – the ‘son of the dragon’. Stoker made a note in his diary of this name, for future use. 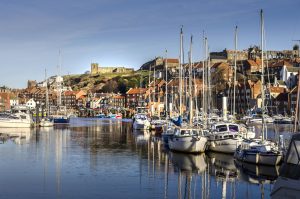 This is the spot in Dracula where a Russian vessel named Demeter of Varna runs aground on a stormy August night. This was based on a true event, which Bram Stoker witnessed in 1895, when ‘the Russian schooner Dmitri of Navra, with silver sand, came in suddenly, in heavy weather, but became a total wreck.’ Interestingly, in Stoker’s novel, the cargo consisted of crates of earth, or ‘mould’, needed for Dracula’s safe repose. Stoker vividly describes in Dracula what happened as the ship crashed into the land:

‘Strangest of all, the very instant the shore was touched, an immense dog sprang up on deck from below, as if shot up by the concussion, and running forward, jumped from the bow on the sand.

Making straight for the steep cliff, where the churchyard hangs over the laneway to the East Pier so steeply that some of the flat tombstones, thruffsteans or through-stones, as they call them in Whitby vernacular, actually project over where the sustaining cliff has fallen away, it disappeared in the darkness, which seemed intensified just beyond the focus of the searchlight.’ 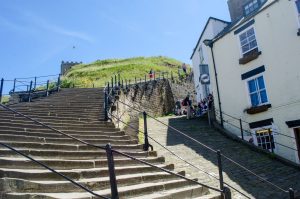 We walk up the 199 steps, the very route that Dracula, disguised as the immense black dog, would have taken. The steps are numbered, so you can keep track of your progress. Look on the left-hand side for small round plaques with Roman numerals on them. When you can see ‘CXCIX’ you’ve reached the top. The dog would no doubt have bounded up a great deal quicker than us, and not bothered to count the steps.

We find St Mary’s churchyard, a key Dracula landmark, at the top. Mina and Lucy, two characters in Dracula who are taking a holiday in Whitby, take a tour here with their landlord Mr Swales, who tells them about the folklore of the town and the legends surrounding some of the gravestones. Mina is told that when men died at sea, families buried an empty coffin here to lay their loved ones’ souls to rest. Mr Swales is of course Dracula’s first victim (and Stoker took the surname from one of the gravestones, which we can still see today). 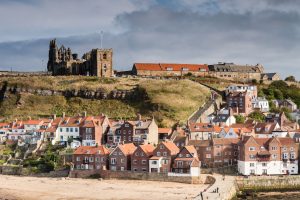 After the exertion of the 199 steps, we find a bench to rest at, which likely is this one described in the novel:

‘The funeral of the poor sea-captain (of the Demeter) to-day was most touching. Every boat in the harbour seemed to be there, and the coffin was carried by captains all the way from Tate Hill Pier up to the churchyard.

The poor fellow was laid to rest quite near our seat so that we stood on it when the time came and saw everything.’

‘…poor old Mr Swales was found dead this morning on our seat, his neck being broken. He had evidently, as the doctor said, fallen back in the seat in some sort of fright, for there was a look of fear and horror on his face that the men said made them shudder. Poor dear old man! Perhaps he had seen Death with his dying eyes!’

The cliffs of Whitby are famous for their reserves of precious jet. Whitby jet really took off in the 19th century. By the 1870s Whitby had over 200 jet shops, employing around 1,500 people. Jet black jewellery is associated with Dracula many times in the novel, representing opulence, mourning and danger in equal measure.

This makes a fitting place to end our walk, the spot where Stoker came more than any other to watch and note everything going on around him. The memorial plaque reads: ‘The view from this spot inspired Bram Stoker (1847-1912) to use Whitby as the setting of part of his world-famous novel DRACULA’.

This view we have now is the one described by Mina Murray in Dracula: 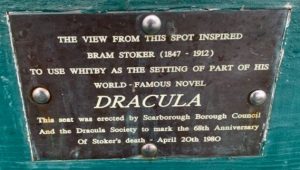 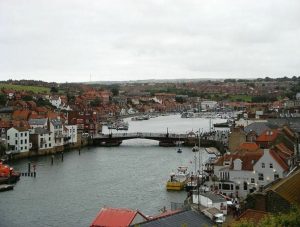 ‘The houses of the old town – the side away from us – are all red-roofed, and seem piled up one over the other anyhow, like the pictures we see of Nuremberg.

‘Right over the town is the ruin of Whitby Abbey, which was sacked by the Danes, and which is the scene of part of “Marmion,” where the girl was built up in the wall. It is a most noble ruin, of immense size, and full of beautiful and romantic bits; there is a legend that a white lady is seen in one of the windows.’

We feel like a snack at the end of our walk, and inevitably find many Dracula-themed choices; Coffin chocolates, vampire teeth, blood bags of syrup, count Dracula lollies and black and red Dracula rock just to name a few. Best embrace Dracula when you’re in Whitby (figuratively speaking).