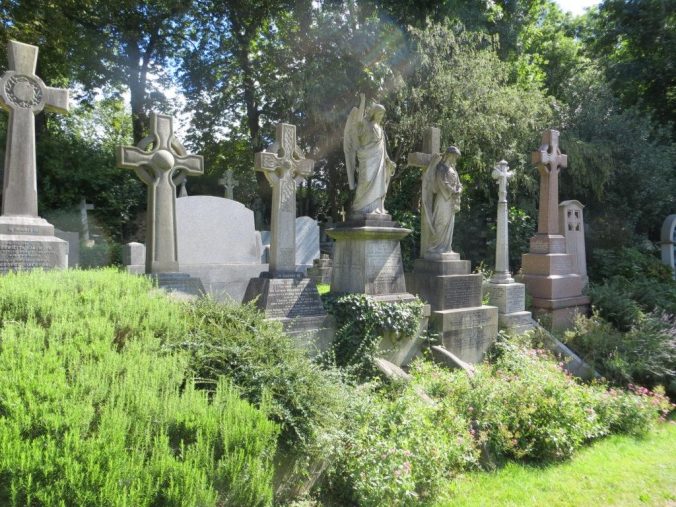 Behold, we know not anything;

I can but trust that good shall fall

And every winter change to spring

Alfred Lord Tennyson’s ‘In Memoriam’, at the entrance to one of the tombs in the Circle of Lebanon

‘Better a spectacular falure, than a benign success’  – Gravestone of Malcolm Mclaren

Highgate Cemetery was opened in 1839, one of seven cemeteries across the capital designed to relieve pressure on church burials as the London population exploded. It is a listed Grade I park. The West Cemetery is especially impressive architecturally, notably the Egyptian Avenue and the Columbarium.

After a long period of neglect, it has been restored to the level of ‘tidy wilderness’ which makes it such an enchanting place to walk through today and seek out famous heroes and heroines from the past, many from the creative and political world.

For us, the wildflowers, birdsong and butterflies flitting around add much to the charm.

WHAT LITERARY FIGURES ARE BURIED HERE? 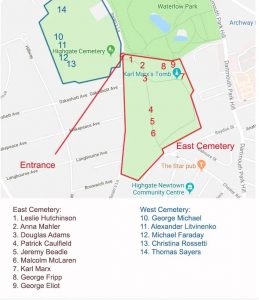 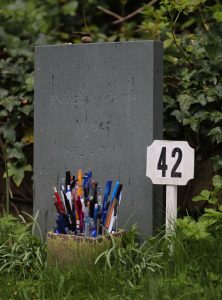 Douglas Adams (1952-2001) Author Of The Hitchhiker’s Guide To The Galaxy. Fans leave pens at the foot of his grave. ‘I may not have gone where I intended to go, but I think I have ended up where I needed to be.’ 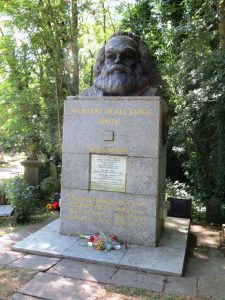 There are also several other literary figures that you can find with the help of the map provided on admission.

How well the skillful gard’ner drew

Of flow’rs and herbs this dial new,

Where from above the milder sun

Does through a fragrant zodiac run;

And as it works, th’ industrious bee

Computes its time as well as we.

How could such sweet and wholesome hours

Stonehenge, Wiltshire: are you a romantic or a rationalist?