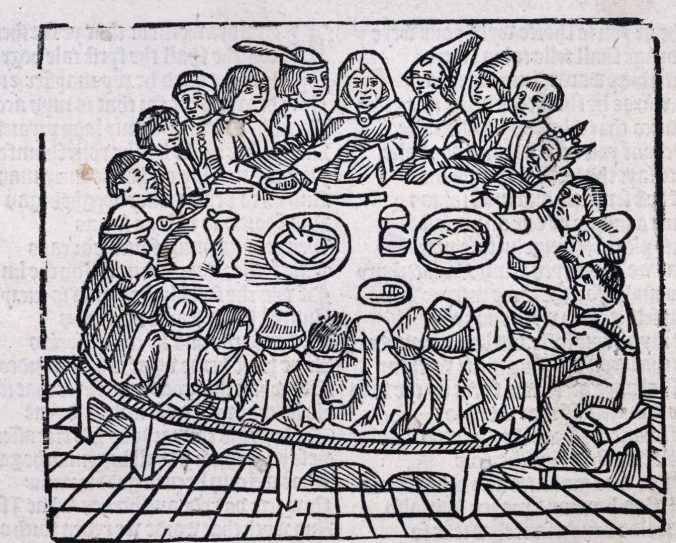 ‘All the world’s a stage, and all the men and women merely players: they have their exits and their entrances’

In medieval times Southwark was separate from London and, being beyond the control of the city elders, was a favoured spot for less salubrious activities, including unlicenced acting, prostitution and bear-baiting.

For several centuries London Bridge was the only permanent crossing point over the Thames, so Southwark was also very much a staging post to the south, along the route of the old Watling Street into Kent. Southwark was where pilgrims typically congregated before setting out on their way to Canterbury Cathedral. 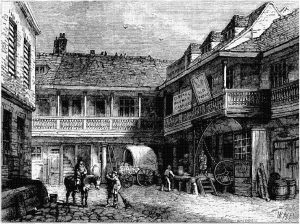 Geoffrey Chaucer’s pilgrims in the Canterbury Tales did just that, beginning their journey at the Tabard Inn, established around 1300.

‘Bifel that in that season on a day,

In Southwerk at the Tabard as I lay

Redy to wenden on my pilgrymage

To Caunterbury with ful devout corage’

The proprietor of the inn, Harry Bailey, becomes the host and guide to Chaucer’s pilgrims, launching a competition to see who tells the best tale (prize; a free meal at The Tabard) and accompanying them as guide on the journey.

Today, the inn has sadly gone, but the courtyard (Tabard Yard) is still there, and a blue plaque has been installed. We can imagine Harry striding through the yard getting his disparate group organised for the journey ahead, probably having to drag the Cook out of the bar. 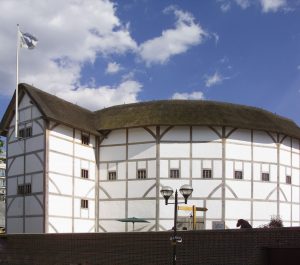 William Shakespeare’s acting company The Lord Chamberlain’s Men were forced south of the river in 1594 and re-built the theatre there themselves with the timbers they had salvaged from the old theatre, re-naming it the Globe Theatre.

Here, they achieved much success and in 1603 gained the patronage of King James I, subsequently becoming The King’s Men. The theatre burnt down in 1613, was re-built bigger and grander but was destroyed a final time in 1645. 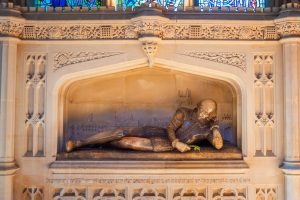 On the way back to London Bridge, we pop into Southwark Cathedral to view a memorial to Shakespeare. The alabaster sculpture, made by Henry McCarthy in 1912, shows Shakespeare resting outside the Globe Theatre.

Immediately above the McCarthy sculpture is a delightful stained-glass window that depicts many of Shakespeare’s most famous characters. Designed and made by Christopher Webb, it was unveiled in 1954.

Although Shakespeare was never a regular worshipper here, many members of his acting company were. We see the ledger stone commemorating the death of Edmund Shakespeare, his younger brother, who died at the age of only 27.

Eat & Drink: At The George Inn, 75 Borough High St, SE1 1NH, the only surviving galleried coaching inn in London and once the neighbour of the Talbot. The Middle Bar was the Coffee Room, which was frequented by Charles Dickens; he mentions it in ‘Little Dorrit’.

Join: A Guided Tour of the Globe Theatre: www.shakespearesglobe.com and learn about its history.