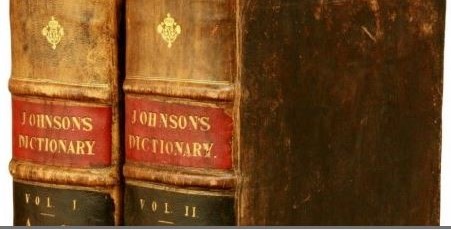 ‘Wherever I turned my view … there was perplexity to be disentangled, and confusion to be regulated’ 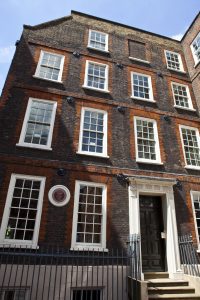 Dr Johnson’s House is a charming 300-year-old townhouse, nestled amongst a maze of courts and alleys just north of Fleet Street.

In 1746, Dr Samuel Johnson agreed to write what would be the first comprehensive dictionary of the English language.

He outlined his intention in 1747, which was ‘to produce a dictionary by which the pronunciation of our language may be fixed, and its attainment facilitated; by which its purity may be preserved, its use ascertained, and its duration lengthened.’

This was no idle boast, and Johnson laboured on the dictionary for nine years, with the help of six assistants. 42,773 entries were created altogether. It was published in 1755 to great acclaim and earned him an honorary Oxford degree.

Johnson and his helpers worked on the dictionary in the attic of 17 Gough Square, which is where we are headed today.

John Hawkins described the scene: ‘The books he used for this purpose were what he had in his own collection, a copious but a miserably ragged one, and all such as he could borrow; which latter, if ever they came back to those that lent them, were so defaced as to be scarce worth owning.’

An important innovation in English lexicography was to illustrate the meanings of his words by literary quotation, of which there were approximately 114,000. The authors most frequently cited include William Shakespeare, John Milton and John Dryden. 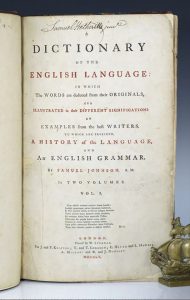 Unlike most modern lexicographers, Johnson introduced humour or prejudice into quite a number of his definitions, which makes it far from a dry text. Among his best-known are:

‘Excise: a hateful tax levied upon commodities and adjudged not by the common judges of property, but wretches hired by those to whom excise is paid’

‘Lexicographer: a writer of dictionaries; a harmless drudge that busies himself in tracing the original and detailing the signification of words’

‘Mouthfriend…one who professes friendship without intending it.’

After Samuel Johnson published his dictionary, he was reportedly approached by two prudish individuals: ‘Mr. Johnson, we are glad that you have omitted the indelicate and objectionable words from your new dictionary.’ His pithy reply: ‘What, my dears! Have you been searching for them?’

Until the completion of the Oxford English Dictionary 150 years later, Johnson’s was the pre-eminent British dictionary. In his history of the Oxford English Dictionary, Simon Winchester asserts of its eighteenth-century predecessor that ‘by the end of the century every educated household had, or had access to, the great book. So firmly established did it swiftly become that any request for “The Dictionary” would bring forth Johnson and none other.’ 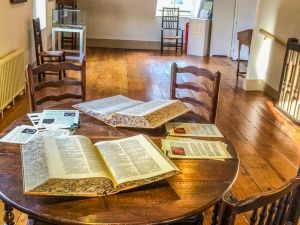 Johnson lived in Gough Square from 1749 to 1759. The tiny attic space has a very fusty feel about it, and we imagine, as we look at a first edition there, the excitement the tiny team must have felt after nine years of hard slog when they first got their hands on the printed version, a mix of delight in seeing it in print and anxiety that there might be typos in it, probably in this very room.

Afterwards, we walk to St Paul’s Cathedral (completed by Wren about fifty years before the dictionary) thus fulfilling both of Dr Johnson’s definitions of walking in his dictionary… ‘to move for exercise or amusement’.

You can check out Johnson’s definition of a particular word at: https://johnsonsdictionaryonline.com/