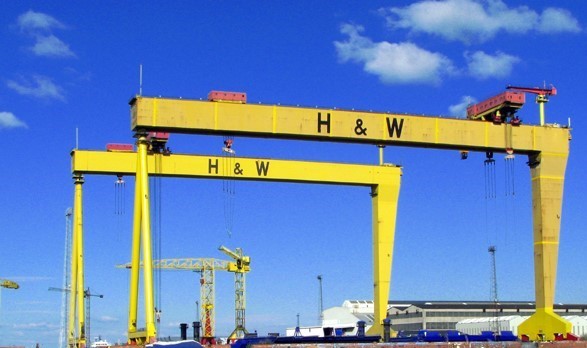 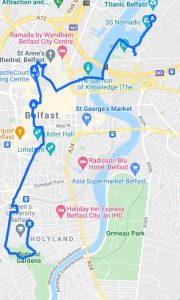 BELFAST AND ITS TWENTIETH-CENTURY POETS

The story of Northern Ireland poets is one of ‘lively poetic exchange’. In September 1963 Derek Mahon, Seamus Heaney and Michael Longley visited the County Down grave of Louis MacNeice together. Longley recalled that as they ‘dawdled between the graves’ all three then-unpublished poets were silently ‘contemplating an elegy’. It is this sense of continuity and comradeship that became a powerful force in these poets’ lives.

Throughout the 1960s, Heaney, Mahon and Longley gave many readings in Belfast together. Seamus Heaney reflected on it: ‘The group of writers I had grown up with in the ‘60s formed a very necessary and self-sustaining group.’ ‘The idea that people from around here were writing poetry was hugely important,’ as Longley put it. This was symbolised by the Belfast Group, a weekly get together set up by Philip Hobsbaum in 1963 as a forum to share and discuss poems. Michael Longley felt that the group gave ‘an air of seriousness and electricity to the notion of writing’.

Michael Longley described Seamus Heaney’s death as ‘like losing a brother’. Muldoon spoke in the eulogy of Heaney’s ‘unparalleled capacity to sweep all of us up in his arms’.

Their Irish roots and appreciation of the landscape were vital to all of them. Their parents were generally from everyday backgrounds – farmers, dockworkers, clergymen, millworkers, market gardeners; and they were typically brought up in the Irish tradition of recitation and storytelling. As Paul Muldoon recalls: ‘the knock on the door and a neighbour dropping by to sit by the fire and maybe being persuaded to give you a bar or two of a song or recite a poem’. And they all maintained throughout their lives a strong connection with Belfast: ‘I still feel very connected to the city’.

We start our walk alongside the iconic Harland & Wolff Samson and Goliath gantry cranes, now scheduled historic monuments. Belfast’s shift from industry to culture is palpable wherever we walk, perhaps none more so than in the new use of the former Harland and Wolff Paint Hall as a set for the ‘Game of Thrones’ TV series. 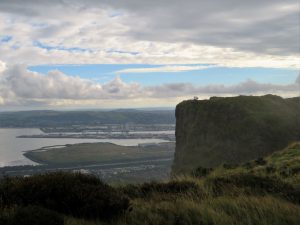 Looking west we peer up towards Cave Hill. Its silhouette resembles a face of a giant lying on its back, and it is said to be the inspiration for Jonathan Swift’s Gulliver’s Travels when he worked as a clergyman in nearby Carrickfergus.

‘I was born in Belfast between the mountain and the gantries

To the hooting of lost sirens and the clang of trams.’

And in his poem ’Valediction’ he captures the mood of the industrial Belfast:

‘Belfast, devout and profane and hard,

Built on reclaimed mud, hammers playing in the shipyard,

Time punched with holes like a steel sheet, time 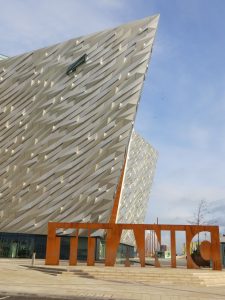 We pop into the Titanic exhibition, housed in an impressive Frank Gehry building exactly the same height as the Titanic and, amongst the many mementoes, read the very poignant ‘After the Titanic’ poem by Derek Mahon.

As we cross the Lagan Weir Bridge, we see on the far bank, just to the right, an arched culvert emerging into the River Lagan. This is the terminus of the River Farset, which now runs underground along the High St. Belfast was founded here at a sandy ford across the Farset, and this is the origin of the city’s name – Béal Feirste, the Mouth of the Farset, an Irish word meaning sandbar.

Paul Muldoon describes this in his poem ‘Belfast Hymn’:

‘A sandbar near a river mouth”

would give Belfast its name.

The river where we’ve slaked our drouth

and where we staked our claim.’

We inspect the blue plaque to writer Anthony Trollope at the General Post Office, where he worked as a surveyor. As well as being a novelist, Trollope’s claim to fame was as the inventor of the red pillar-box.

Marks and Spencer, which we pass next, was the setting for a passage in Seamus Heaney’s ‘Preoccupations: Selected Prose’, in which he recalls ‘the perils of the department stores’, which were a frequent target for incendiary bombs, and writes of being caught in a bomb scare while paying for pyjamas here.

We head up Donegall St past The John Hewitt Bar and Restaurant, named after the poet. Today it is a popular meeting place for local writers, musicians, journalists, students and artists. 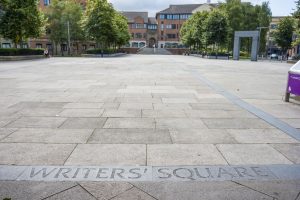 Next, we explore Writers’ Square and enjoy reading the many famous quotes by local writers carved into the stone. We are particularly struck by this excerpt from ‘Belfast Confetti’ by Ciaran Carson; the poem recounts a bombing in the city, in a staccato rhythm of punctuation and gunfire:

‘Suddenly as the riot squad moved in it was raining exclamation marks,

Nuts, bolts, nails, car-keys. A fount of broken type. And the explosion.

Itself – an asterisk on the map. This hyphenated line, a burst of rapid fire…

I was trying to complete a sentence in my head, but it kept stuttering,

All the alleyways and side streets blocked with stops and colons.’ 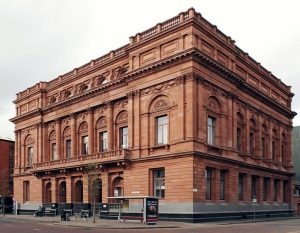 From Writers’ Square, we catch a glimpse of the Victorian stucco magnificence of Belfast Central Library, fondly remembered as a ‘red-brick haven’ in John Hewitt’s poem ‘Reading’. Heaney discovered the poems of Ted Hughes here in 1962. He recalls that Hughes’ ‘Lupercal’ made him realise that his rural background was worthy of powerful poetic expression. ‘Suddenly, the matter of contemporary poetry was the material of my own life.’

The Linen Hall Library was founded in 1788 with this aim: ‘the collection of an extensive Library, philosophical apparatus and such products of nature and art as tend to improve the mind and excite a spirit of general enquiry’. Today it is the leading centre for Irish and Local Studies in Northern Ireland.

The library has been a haven for many of the city’s most prominent writers, including Tom Paulin, who portrays the Linen Hall as a kind of sanctuary, writing of the ‘style and discipline’ ingrained in ‘that eighteenth century, reasoned library’ in his poem ‘To The Linen Hall’.

Seamus Heaney wrote about it: ‘In our cultural and our historical understanding, the very words “The Linen Hall Library” represent not just books, but better hopes for the way we live.’

We pass by the pile of the Baroque Revival City Hall to discover the exquisite late Georgian main building of the famous Royal Belfast Academical Institution, designed by John Soane. Its aim was ‘to diffuse useful knowledge, particularly among the middling orders of society, as one of the necessities rather than of the luxuries of life’.  Judging by its alumni list, it seems to have been very successful, numbering John Hewitt, Derek Mahon and Michael Longley amongst its literary stars.

Perhaps most intriguingly, Lisburn-born Charles Monteith, the Poetry Editor of Faber and Faber, was also an old boy here. He would ask TS Eliot, his co-Director, to sign new editions of his books ‘for the boys of Inst’ before donating them to the school library. Monteith’s authors read like a Who’s Who of Literature, including William Golding, Philip Larkin, John Osborne, Ted Hughes, PD James and, and most pertinently to our story, Paul Muldoon, Tom Paulin and Seamus Heaney. He published Seamus Heaney’s first collection, ‘Death of a Naturalist’, in 1966.

We head towards the older part of the city, along the Lisburn Rd, scene of Michael Longley’s poignant poem about The Troubles, ‘The Ice-Cream Man’:

You would rhyme off the flavours. That was before

They murdered the ice-cream man on the Lisburn Road

And you bought carnations to lay outside his shop.

I named for you all the wild flowers of the Burren

I had seen in one day: thyme, valerian, loosestrife,

The day we pass, Blackwell’s Bookshop has a book display of Irish poets in the window. It reminds us of a poem by Michael Longley called ‘Bookshops’.

Aisles of books, elbow room and no more,

Our first pamphlets jostling for attention,

I’ll move mine to the front. Nobody’s looking).

Death of a Naturalist, Late but in Earnest,

The terrible shock of our names and titles.

Each wee bookshop has closed, a lost cathedral

With its stained-glass window that depicts

A young poet opening his book of poems.’

Just beyond the bookshop in University Square is the Queen’s University School of Arts English and Languages (AEL), home of the Seamus Heaney Centre for Poetry, a hub for creative writing.

And opposite it is The Lynn Building, designed in a vibrant Ruskinian Gothic style, originally the main library. Philip Larkin was the sub-librarian here from 1950-55, and there is a blue plaque to him at the entrance. His link to the Belfast poets is minimal in terms of style and influence, but his publisher was of course Charles Monteith, who used to correspond with him here. His stay in Belfast is well captured in his poem ‘The Importance of Elsewhere’.

On our right now is Fitzwilliam St, where the famous Belfast group met at No. 5. Philip Hobsbaum, who ran it, didn’t have far to walk from home to work, as he was a lecturer in English at Queen’s University. Today it still seems to be university lodgings.

As we peer up to the end of Fitzwilliam St, we see the hills, as one does on so many streets in this city, and we are reminded of the evocative ‘Spring in Belfast’ by Derek Mahon: 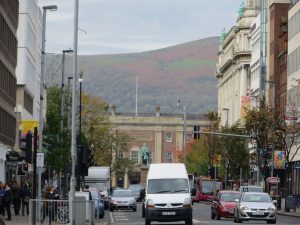 ‘Walking among my own this windy morning

In a tide of sunlight between shower and shower,

I resume my old conspiracy with the wet

Stone and the unwieldy images of the squinting heart.

Once more, as before, I remember not to forget.

There is a perverse pride in being on the side

Of the fallen angels and refusing to get up.

At the top of every street, for there it is,

Finally, we look on at the Victorian Gothic splendour of Queen’s, where Paul Muldoon, Frank Ormsby, Ciaran Carson and Liam Neeson (the actor) were all students, and Seamus Heaney was both a student and a lecturer.

Our final stop is the delightful Botanic Gardens where no doubt many a budding poet has come to think and compose. Paul Muldoon lived in Landseer St, one of the streets running off it. One section of his poem ‘Incantata’, refers to an incident when a priest visited to establish whether he was living in sin with his partner:

‘of the priest of the parish

Who came enquiring of our ‘status’, of the hedge-clippers,

I somehow had to hand, of him running like the clappers

up Landseer street, of my subsequent self-reproach.’

We notice one pretty untrimmed hedge, could that have been his house?!

Just south side of the gardens is The Lyric Theatre, where film star Liam Neeson began his career in 1976. He is currently the theatre’s patron. Kenneth Branagh also acted here in 2011, returning to Belfast for the first time since his youth. He has since made an excellent film, Belfast (2021) about growing up in the city.

Finally, we look out over the rather unprepossessing Stranmills Embankment towards the river. Paul Muldoon’s poem ‘The More a Man Has the More a Man Wants’ was partly set here. The poem creates an image of a seedy-yet-ridiculous underbelly of Belfast, featuring a man named Gallogly rampaging through Belfast in a stolen milk float, travelling along the Stranmills Embankment and out to Armagh.

‘Gallogly is wearing a candy-stripe

a little something he picked up

off a clothes line.

He is driving a milk van

he borrowed from the Belfast Co-op

while the milkman’s back

He had given the milkman a playful

When he stepped on the gas

he flooded the street

He is trying to keep a low profile.’ 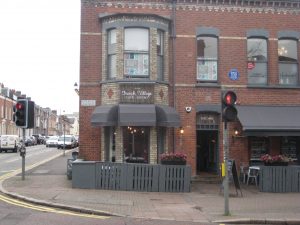 We walk back along Botanic Avenue and stop off at one of the many delightful eating spots for some R &R.

And then we finish off with a bit of browsing in the delightful No Alibis bookshop. Apparently, local authors love the place; and Colin Bateman wrote his crime novel Mystery Man about an independent bookshop in Belfast based on it. Belfast has a very lively culture.