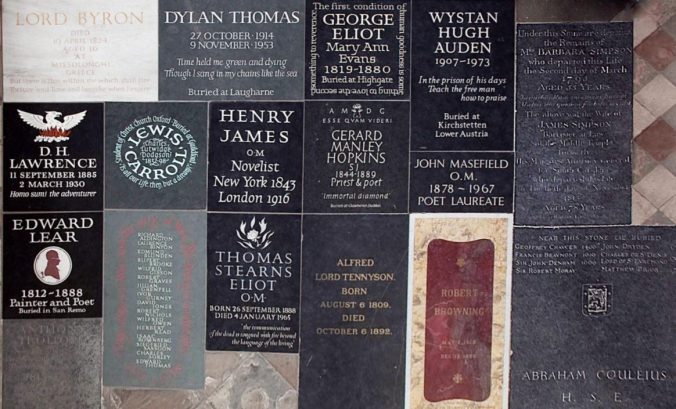 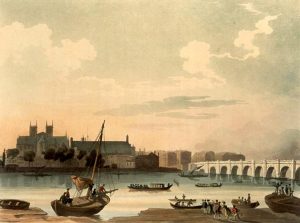 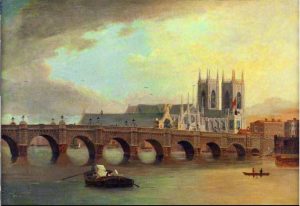 We start our walk on Westminster Bridge and pick an early Sunday morning to try and soak up the experience before the rush of the day. We lean over the parapet peering downstream and recite Wordsworth’s famous poem ‘Composed upon Westminster Bridge, September 3, 1802.’

‘Earth has not any thing to show more fair:

Dull would he be of soul who could pass by

A sight so touching in its majesty:

The beauty of the morning; silent, bare,

Open unto the fields, and to the sky;

All bright and glittering in the smokeless air.

In his first splendour, valley, rock, or hill;

Ne’er saw I, never felt, a calm so deep!

The river glideth at his own sweet will:

And all that mighty heart is lying still!’

Many people commented during Lockdown that they found London in just such a mood for the first time in many years. 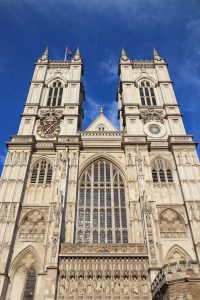 Next, we head across Parliament Square to Westminster Abbey. The statues in the square are of politicians and campaigners, two of whom were notable writers as well: Winston Churchill who wrote, ‘A History of the English-Speaking Peoples’ 91956); and Millicent Garrett Fawcett who wrote three books, perhaps her best-known being ‘Political Economy for Beginners’ (1870). (see the Bloomsbury, London walk).

Poets’ Corner, a section of the South Transept of the abbey, is a place of pilgrimage for literature lovers. More than 100 poets and writers are buried or have memorials here.

The first poet to be interred was Geoffrey Chaucer, who owed his 1400 burial here more to his position as Clerk of Works of the Palace of Westminster than to his fame as a writer. After he died in 1599, Edmund Spenser was buried near his tomb as a way of showing that he was recognised as Chaucer’s natural successor as the greatest poet of his age. A tradition then began of burying celebrated writers in this part of Westminster Abbey, and by the 1730s it had become known as Poets’ Corner.

Many of those buried or remembered in Poets’ Corner are also featured in Literary Rambles: 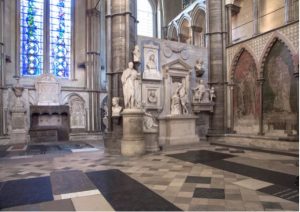 Traditionally, some years elapse after the deaths of the great and the good before they receive commemoration in the abbey, and in Lord Byron’s case more than a century, perhaps due to his scandalous lifestyle. In truth, the corner’s poets, playwrights and novelists have been awarded memorials according to fashion, tradition and the critical temperature of the day. And whilst there have been numerous campaigns for various writers to be featured, some disliked the idea, notably Thomas Hardy who expressed a preference to be buried in the church at his childhood home. A compromise was finally reached, and his ashes were interred here and his heart in Stinsford Church.

Critics of Poets’ Corner have memorably complained that it is a ‘chaotic rockery’. I rather like its haphazardness, because that makes it possible to stumble across unexpected literary delights.

And, if the mood is all a bit sombre for you, read ‘Visiting Westminster Abbey’ by Amanda McKittrick Ros, the notoriously bad writer who so amused the Inklings in Oxford. It begins:

Flesh decayed in every nook!

Mortal loads of beef and beer.’

Westminster Abbey, 20 Dean’s Yard, SW1P 3PA www.westminster-abbey.org/visit-us. There is a charge for admission.