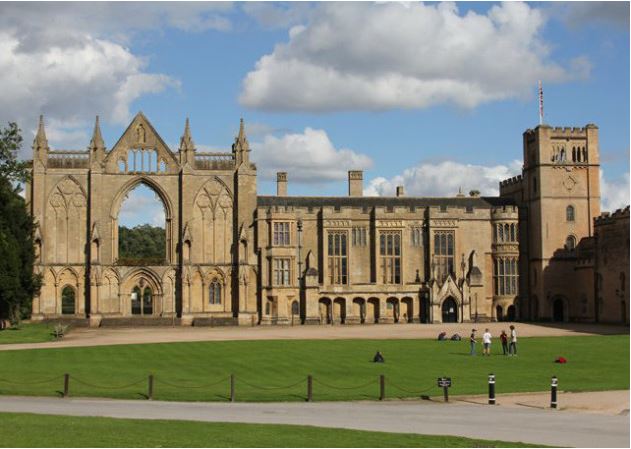 ‘…It lies perhaps a little low,

Because the monks preferred a hill behind

To shelter their devotion from the wind.’ 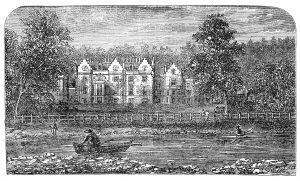 Lord Byron was one of the leading figures of the Romantic movement, embodying a lifestyle of brilliance and lasciviousness. The phrase ‘mad, bad and dangerous to know’ was coined for him, and he became a very famous character, one of the great celebrities of his day.

Newstead Abbey was Byron’s ancestral home, but when he took it over it was in a dilapidated state. The East wing was roofless, the refectory was used to store hay, and the kitchen was ‘a heap of rubble’. The only dry room in the entire rambling mansion was the scullery. Byron had no money to repair it, but the crumbling old house and monastic ruins made an indelible impression and inspired some of his more Gothic forays into romantic poetry.

‘Through thy battlements, Newstead, the hollow winds whistle;

Thou, the hall of my fathers, art gone to decay;

In thy once smiling garden, the hemlock and thistle

Have choked up the rose which late bloom’d in the way.’

He had a room in the old Prior’s Lodging repaired enough to serve as a bedchamber and used the rectory hall as a shooting gallery to practice with his pistol. A cell off the old abbey cloisters was flooded to serve as a plunge bath. He held wild parties which, according to one account, included dressing up as monks and drinking from a human skull filled with brandy.

As we arrive, we admire the setting in the dip of a valley, conjuring up the description in Don Juan, Cantos 15 and 16 of which amount to a guide to Newstead;

‘An old, old monastery once, and now

Still older mansion of a rich and rare

…It lies perhaps a little low,

Because the monks preferred a hill behind

To shelter their devotion from the wind.’

The Byron Oak was planted by the great poet shortly after he inherited the estate.

On returning to Newstead in 1807, Byron was shocked to find the seedling almost choked by weeds, and it was this circumstance that prompted him to write the poem, ‘To an Oak at Newstead’, which opens thus:

‘Young Oak! When I planted thee deep in the ground,

I hoped that thy days would be longer than mine;

That thy dark-waving branches would flourish around,

And ivy thy trunk with its mantle entwine.’

A replacement oak was planted in 1988 by Byron’s direct descendant, Lord Lytton, to mark the 200th anniversary of the poet’s birth, and this can be seen nearby. 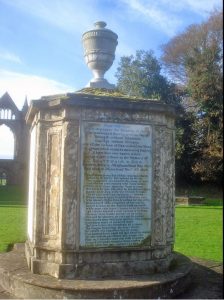 Byron had a beloved Newfoundland dog named Boatswain, who died of rabies in 1808. Boatswain was buried at Newstead Abbey and has a monument larger than his master’s. The inscription, from Byron’s poem Epitaph to a Dog, has become one of his best-known works:

Are deposited the Remains

And all the Virtues of Man

This Praise, which would be unmeaning flattery

If inscribed over Human Ashes,

Is but a just tribute to the Memory of

Who was born at Newfoundland,

And died at Newstead Abbey

Inside the Abbey, there is much to discover, including Lord Byron’s private apartments. As for the house, it is like a rabbit warren, with corridor after corridor leading through a succession of rooms, most filled with Byronian memorabilia.

You can see Byron’s bed-chamber, with his own pistol laid out on a night table beside the gilded bed which he brought here from his student digs in Cambridge. We read letters and manuscripts penned by Byron and see drawings, family furniture, and the desk where he wrote much of his most famous poetry.

HOW DO I GET THERE?

Visit: Byron’s grave at Saint Mary Magdalene church in nearby Hucknall (NG15 7AZ). He is buried there with his daughter, Ada Lovelace, the world’s first computer programmer. There is also a memorial to Byron in the church