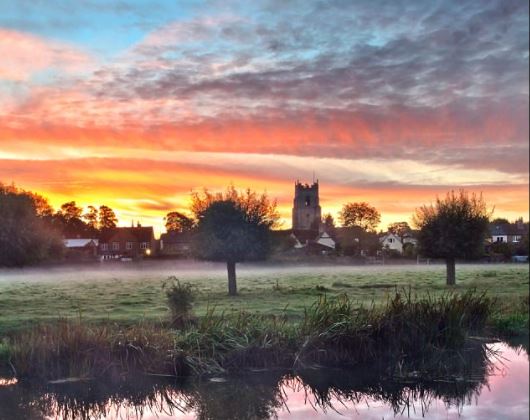 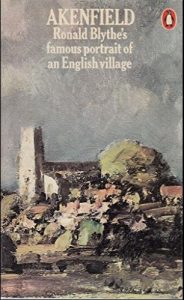 The inspiration for this walk… Akenfield

I first read Akenfield twenty or more years ago and it has held a tight grip on my perception of the countryside ever since.

It just seemed so very believable – there was as much emotionally damaging about the claustrophobic, inward-looking world of early twentieth century village life as there was good.

But, because it was told in a direct ‘reportage’ style, it really rang true and made the account feel so much more authentic than many a ‘pastoral idyll’ purple passage in a rural novel. I have stuck to living in a market town ever since!! 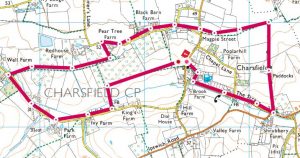 Ronald Blythe was born in Suffolk and came from generations of East Anglian farm workers; even his surname comes from its river Blyth. He has lived all his long life in Suffolk, and he was living in Debach, close by Charsfield, when he wrote his famous ‘warts and all’ account of rural life, Akenfield, in 1967.

In many ways Blythe tried to take the principles of painting into writing: ‘The artist’s main business is to train his eye to see, then to probe, and then to train his hand to work in sympathy with his eye,’  John Nash, his great friend had said. ‘I was a poet, but I longed to be a painter like the rest of them,’ reflected Blythe. ‘What I basically am is a listener and a watcher. I absorb, without asking questions, but I don’t forget things.’

Akenfield is a fictional name, ‘acen’ being the Old English name for oak.

In Blythe’s words ‘Akenfield is chiefly based on Charsfield, but with the surrounding countryside drawn into it’. He goes on: ‘My only real credentials for having written it was that I was native to its situation in nearly every way and had only to listen to hear my world talking. This book is the quest for the voice of Akenfield, Suffolk, as it sounded during the summer and autumn of 1967.’

He spent the winter of 1966–67 in what he called ‘a kind of natural conversation with all three generations’ of his neighbours, capturing their thoughts on ‘farming, education, welfare, class.’

Akenfield does not bow to sentimental ideas of the countryside idyll, and even the villagers we might expect to romanticise their work or to sink into simple nostalgia for the past, take a more complex view of it. They speak candidly of the brutality of country life and of hopes to escape the village. ‘I don’t want to see the old days back,’ says one farmworker. ‘Every bad thing gets to sound pleasant enough when time has passed. But it wasn’t pleasant then, and that’s a fact.’

Blythe does not attempt to interpret or give meaning to the natural world, he just tries to tell it as it is…in this, he is more akin to a Daniel Defoe or a Willian Cobbett in our literary canon.

The great subject of Akenfield is the ways people grapple with changes in the patterns of life in their own time – in this case, the wars, technological change and the crumbling of the class system. Blythe recognised that under the placid surface of a place as seemingly unchanging as Akenfield lay a clash of virtual tectonic plates, as a class-riven, tradition-bound, nearly feudal community emerged blinking into the modern world.

Superficially, Charsfield has not changed much since Blythe described it. The population is still about 300, the same as when Akenfield was written. All the institutional buildings remain and are still used (the church, the chapel, the village hall), only the pub has petered out, although they have a pop-up pub in the village hall every Friday. The primary school is as healthy as ever.

But the pattern of work has shifted dramatically. In 1969, all but three of the 85 people of working age were involved in the land. Today, only about three work on the land. The rest jump in their car and head off somewhere, or increasingly work via the internet at home. But they definitely don’t pick up a farm implement.

Incidentally, Ronald Blythe has always been a very keen walker, and it has helped him with his writing:

‘I walk a  mile or so of flinty track to fetch the milk, and each week two miles or so to the post office, church and pub, and more miles still when my thoughts run out and the typewriter clicks to a halt, and I have to wander off to the river paths for a little solvitur ambulando’.

We drive into Charsfield from Ipswich along the old Roman Road (the B0178 to us non-Romans) along the straight stretch that Blythe describes at the start of the book:

‘The village lies folded away in one of the shallow valleys which dip into the East Anglian coastal plain. It is not a particularly striking place and says little at first meeting. It is approached by a spidery lane running off from the “bit of straight,” as they call it, meaning a handsome stretch of Roman road, apparently going nowhere. This road suggests one of those expensive planning errors which, although cancelled in the books, will mark the earth for ever. It is the kind of road which hurries one past a situation. Centuries of traffic must have passed within yards of Akenfield without noticing it.’

Charsfield is indeed an unremarkable but agreeable village, and its beating heart, the school, is where we begin our walk.

At first sight, it is surprising to discover how little pupil numbers have changed. There were about 45 children in 1967 and so there are now. But the big difference is that then almost all came from the village and arrived on foot, whereas now only half a dozen or so do. Most arrive from surrounding towns. Parents are happy to drive more than ten miles each way because they love the small class sizes and the village atmosphere.

The school was built immediately after the Education Act of 1870 on land given by the Duke of Hamilton. The challenge for the first few decades of its life was merely keeping the kids there – farmers would pull the boys from school whenever there was a vital farming job to be done, especially the harvest. The headmistress at the time of the book, Mrs Sullivan, is beautifully described: ‘Children are instantly at ease with her. She doesn’t need their fear or to plead for their affection.’ 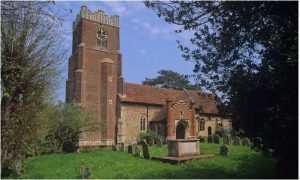 Opposite the school stands the spire of St Peter’s Church, where Blythe was a churchwarden when he lived at nearby Debach. We push the door open to look inside and are reminded of the forge worker’s observations: ‘I look at everything. I don’t open a church door without looking at the hinges.’ Very delightful Victorian hinges they are too. We look up at the two bells in the tower and recall the lost tradition of tolling bells for the death of a fellow villager:

‘It was three times three for a man and three times two for a woman. People would look up and say, “Hullo, a death?” Then the years of the dead person’s age would be tolled and if the bell went on speaking, “seventy-one, seventy-two …” people would say, “Well, they had a good innings!” But when the bell stopped at eighteen or twenty a hush would come over the fields.’

Coming out into the churchyard, the rather sobering words of the gravedigger named ‘Tender’ are conjured up: ‘I can always tell if a person is dead by looking at the eyes. I never make a mistake about dead eyes. I see at once when the seeing has gone.’ We walk on through the churchyard into St Peter’s Close and onto the Street, heading east past The Three Horseshoes Pub, now sadly closed. Craig Taylor launched his book ‘Return to Akenfield’ here in 2005.

Just past the pub is an old cottage, now immaculately restored. We think of Leonard, aged 71, recalling his Akenfield childhood:

‘It was very hard living indeed… our cottage was nearly empty, except for people. There was a scrubbed brick floor, and just one rug made of scraps of old clothes pegged into a sack. Six of us boys and girls slept in one bedroom, and our parents and the baby slept in the other. There was no newspaper, and nothing to read except the Bible. All the village houses were like this.’ 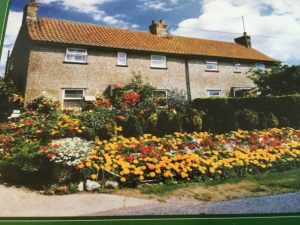 We walk past the ‘Akenfield’ Council House where Peggy Cole, the lady who played the matriarch in the 1974 film, used to live. She became a well-known local fundraiser, opening her ‘council garden’ to the public, even entertaining Princess Margaret there once at a charity event.

The Baptist Chapel at the end of The Street is described thus; ‘The chapel is a pleasant square building made of red bricks and has a pyramidal ‘Roman’ or pantiled roof. There is a burial ground behind it. The windows have the blankness of an injured retina, a bloomy sightlessness.’ The deacon recounts a time when one of the itinerant preachers went on for over an hour and someone got up and said, ‘Excuse me, but with respect, I think you have said enough’ – ‘And with respect to you’, answered the preacher, ‘I’d like you to know that God is still putting words into my mouth, so where do we go from here?’ And so we had to let him go on.’ This was a well-known chapel, and people would once walk 20 miles to hear the Word in it. By the side of it we see the field in which they used to hold rallies every June, in a tent which seated a thousand.

Along the Deben Valley, which runs to the north of Charsfield, were the aristocratic estates, perhaps the biggest one being The Duke of Hamilton and Brandon who lived at nearby Easton Park. Another was Baron Covehithe, ‘whose house lay just outside Akenfield’. Maybe this one we pass, the Old Hall, or at least somewhere similar with lots of grounds. This place at least has a tennis court we notice.

One of the Covehithe’s gardeners was Christopher Falconer, who was thirty-nine when Blythe interviewed him. He begins:

‘Feudalism is a kind of game, set and match with partners at both the serving and receiving ends, knowing exactly what is expected of them and abiding unquestionably by the rules.’ Falconer went to work in the garden, just like his father, grandfather and great-grand-father before him, at the age of fourteen, when the gardening staff numbered seven. He found it a frightening experience, as Lady Covehithe would shout ‘swing your arms’ whenever she encountered a garden boy. Wearing green baize aprons and collars and ties, whatever the weather, the gardeners were expected to make a long detour with their wheelbarrows full of weeds, lest they be seen from the terrace. The gardeners organised the flower arrangements in the house, covertly arriving before the household’s breakfast. ‘Lord and Ladyship must never hear or see you doing it; fresh flowers had to be just there…there was never a dead flower. It was as if flowers, for them, lived for ever. It was part of the magic of their lives.’

We complete our circuit back into the village, our heads still full of the voices of the past. School is just out, and there’s shrieking from the playground, some things never change.