‘Everything about the place, in fact, which made it precisely this place, and not that one, was forgotten’ 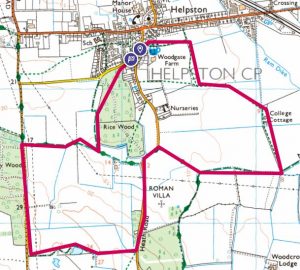 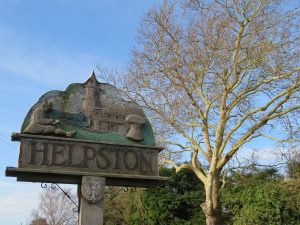 John Clare was born in Helpston, a little village at the edge of the fens, and lived there for the first 40 years of his life. His poetry is characterised by an affinity with nature captured in a fresh and vivid tone. He stands apart from other nineteenth century romantic poets in that he came from a humble background – he was a farm labourer.

John loved nothing more than to ramble along his native paths, and his poems vividly record those impressions, such as ‘The Moorehens Nest’:

‘And then I walk and swing my stick for joy

A gate whose posts are two old dotterel trees

A close with molehills sprinkled oer its leas

A little footbrig with its crossing rail

A brooklet forded by its stepping stones’

He was also happy to lie for hours watching nature. The accuracy of the descriptions results from many lengthy scarcely-daring-to-breathe starings at building material, delicate eggs and parent birds that were not conscious of the poet’s presence. In this respect, he reminds me very much of Ted Hughes, almost trance-like in his intense observation.

So many of his poems involve walking and observing, perhaps the most quintessential being the ‘Pewitt’s Nest:

‘Across the fallow fields at early morn

I took a random track where scant and spare

The grass and nibble leaves all closely shorn

Leaves a burnt flat all bleaching brown and bare…’

The ‘curse’ of enclosure

At the time of the Helpston Enclosure in 1809, John Clare, by then a youth of 16, looked after flocks of sheep and geese on the heath, so he was directly and detrimentally affected by the change as the heathland was enclosed and converted into fields.

John Barrell, in his classic book on Clare, describes how devastating the effect of enclosure could be:

“Everything about the place, in fact, which made it precisely this place, and not that one, was forgotten; the map was drawn blank, except for the village itself, the parish boundary, and perhaps woodland too extensive or too valuable to be cleared, and streams too large to be diverted. The enclosure commissioner would then mark in the new roads he was to cause to have made to the neighbouring villages, running as straight as the contours of the land would allow…The effect of enclosure was of course to destroy the sense of place which the old topography expressed, as it destroyed the topography itself.”

In his poem ‘The Village Minstrel’, Clare describes the negative impact of enclosures upon paths:

‘There once were lanes in nature’s freedom dropt,

There once were paths that every valley wound, –

Inclosure came, and every path was stopt;

Each tyrant fix’d his sign where paths were found,

To hint a trespass now who cross’d the ground:

Justice is made to speak as they command;

The high road now must be each stinted bound:

– Inclosure, thou’rt a curse upon the land,

And tasteless was the wretch who thy existence plann’d.’

Whilst enclosure undoubtedly improved agricultural productivity, it also profoundly changed the relationship between the villagers and the countryside. From being a part of their very existence, it became just a place of work, that at other times was inaccessible and no longer ‘theirs’. 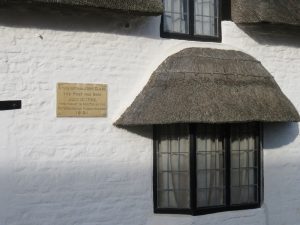 Our walk begins at John Clare’s birthplace, in the centre of Helpston. We go on a day when the cottage is open to the public and peer around the little rooms. Most of all we enjoy the garden, planted with varieties that would have grown in Clare’s time, and full of butterflies. 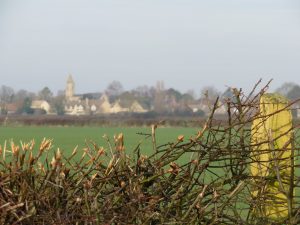 Leaving the village, we immediately sense the change that must have occurred to the exact route of paths at the onset of enclosure. Today the path hugs a field edge and then, without warning, plunges diagonally across a field to College Cottage. This is not logical to cut across a field, and one can only assume that the path existed before the enclosed field, at which time it would have fallen on the balk between crops.

The field to the north of Oxey Wood was the site of a Roman villa. In the 1820s John Clare helped with an archaeological dig here, during which Roman pottery and a mosaic floor were unearthed.

The route next takes us to Swaddywell Pit, which is now a nature reserve. Today we spot pyramidical and bee orchids, and numerous birds and insects.

This was a great haunt for John Clare as a boy, and he called it Swordy Well. In his poem the ‘Lament of Swordy Well’ he bemoans the loss of this wild space to enclosure and to the plough:

‘Ah me! – they turned me inside out
For sand and grit and stones,
And turned my old green hills about
And picked my very bones.
The bees fly round in feeble rings
And find no blossom by,
Then thrum their almost weary wings
Upon the moss, and die.’

Taking the bridleway that runs from east to west above the pit, we soon emerge onto King Street, formerly a Roman road. Slightly raised as it is, we can imagine the aggers on either side. Clare described walking along it: ‘I could almost fancy that this blue anemone sprang from the blood or dust of the romans for it haunts the roman bank in this neighbourhood.’ And then we see it – a bank of blue anemones. A moment.

To the left of the road is Hilly Wood, another favourite haunt. On one of his visits, Clare found five types of ferns in this wood. Today we only muster three. On another visit, he was accosted by one of Sir John Trollope’s ‘meddlesome and consieted’ gamekeepers and accused of being a poacher. He was indignant because he had never shot so much as a sparrow in his life.

We spot some hares in the field and are reminded of Clare’s poem ‘Hares at Play’:

On the lane’s road to dust and dance and play,

Then dabble in the grain by naught deterred

To lick the dew-fall from the barley’s beard;

Then out they strut again and round the hill

And now we are nearly home, returning as the young Clare would have done, to his family home. He would often roam outdoors for hours on end and worry his parents:

‘I eagerly wandered on and rambled among the furze for the whole day till I got out of my knowledge when the very wild flowers and birds seemed to forget me …when I got home, I found my parents in great distress and half the village about hunting me…’