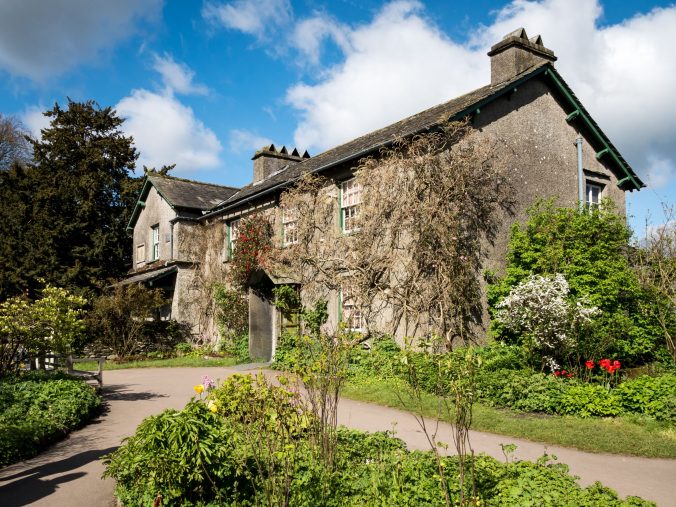 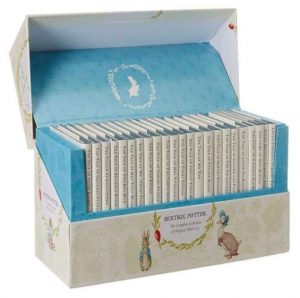 My parents would come round to Bill & Laddie’s for dinner frequently and, only being about five years old, they had to bring me, piling me in the back of the car and then carting me upstairs to my temporary bedroom. where there was a boxed set of Peter Rabbit on the windowsill on the other side of my little bed.

As I heard laughter and happiness percolating up the stairs, so I would dive into one of the Peter Rabbit books and always get to read a complete story, entranced. But somehow, I was always fast asleep when it was time to go home, and I was thrown back into the car like a sack of potatoes, barely conscious.

But I was always delighted to come again, because it meant I got to read another one of my favourite tales. 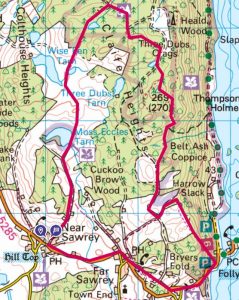 Born into an upper-middle-class household, Beatrix Potter was educated by governesses and grew up isolated from other children. She had numerous pets and spent many holidays in the Lake District, developing a love of landscape, flora and fauna, all of which she closely observed and painted.

Beatrix Potter’s study and watercolours of fungi led to her being widely respected in the field of mycology. In her thirties, she self-published the ‘The Tale of Peter Rabbit’, and then began writing and illustrating children’s books full-time.

With the proceeds from the books, Potter bought Hill Top Farm in Near Sawrey in 1905 to be able to spend more time in her beloved Lakes. Over the following decades, as the royalties came in, she purchased additional farms to preserve the unique hill country landscape.

In 1913, at the age of 47, she married William Heelis, a respected local solicitor from Hawkshead. Potter was also a prize-winning breeder of Herdwick sheep, and a prosperous farmer keenly interested in land preservation. When Beatrix died in 1943, she left 4,000 acres of land to the National Trust, including 15 farms, cottages, flocks of Herdwick sheep and several areas of outstanding beauty.

In her books, settings are specified in almost every detail to a particular place, a specificity which is crucial to the effect of the books, including the six of her tales which are set in or near Sawrey or Hill Top Farm itself.

Potter, although rendered anxious and angry by day-trippers, received pre-arranged visitors at Hill Top and was at pains to show them the house as it had already appeared in the books; they would see, disposed suggestively around the house, the rooms and artefacts featured as a backdrop in her illustrations.

She left the farm to the National Trust on the condition that nothing in it was moved or altered and that it was never lived in again. ‘Hill Top is to be presented to my visitors,’ she stated, ‘as if I had just gone out and they had just missed me.’ A film set for her books, set in aspic. Disneyworld would have been proud of it, she invented the concept of a themed home long before they got going.

We ‘set off – with a hop, skip and a jump’ from the parking area by the side of Lake Windermere. This route allows short detours through the trees to glimpse beautiful vistas of Belle Isle and the lake with its flotillas of moored yachts. 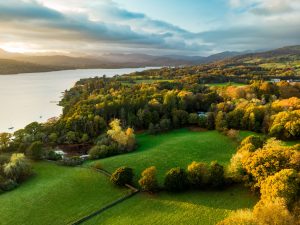 We climb to the trig point at High Blind How and get glorious views of the larger Langdale and Coniston ranges.

Beatrix Potter’s ashes were scattered somewhere around here, probably on the west side of the heights, by her old friend and head shepherd, Tom Storey. This was ‘her country’, where she had walked many times with her husband and on her home.

Our path takes us in a circuitous route around the lower parts of Claife Heights and brings us into an area of tarns, first Wise Een Tarn and then Moss Eccles Tarn. There are good views from here of the craggy profile of the Langdale Pikes, Crinkle Crags and Bow Fell.

Moss Eccles Tarn is where Beatrix Potter spent many an hour fishing with her husband – from a rowing boat that can now be seen at the Steamboat Museum at Windermere. The water lilies on Moss Eccles inspired the story of Jeremy Fisher.

Heading down towards Near Sawrey, Oatmeal Crag is on our right, where in the tale of Mr Tod, the sinister Mr Tod and the oafish Tommy Brock live nearby ‘at the top of Bull Banks’. Beatrix loved to sit here during her 1896 family holiday at Lakefield. In her diaries, she records her delight in imagining that myriad fairy fungi are singing, bobbing and dancing in the grass, laughing and clapping their hands. 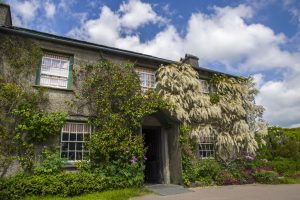 We pay a visit to the Beatrix potter ‘shrine’ of Hill Top Farm. Its popularity makes it hard to get any quiet time to reflect on the author’s inspirations, maybe retire to the lovely orchard for a while if the weather allows. 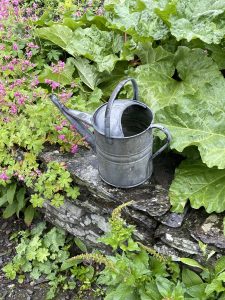 Mr McGregor’s sieve, tin watering can and wooden-handled spade stood just where we had imagined them in the garden. The slate porch looked entirely familiar, too; we half expected to see Tom Kitten in his blue jacket and trousers, accompanied by his sisters Mittens and Moppet in clean pinafores and tuckers, with their mother Tabitha Twitchit looking after them, toasting fork in paw.

Here are the very red-and-blue carpeted stairs where Tabitha mewed dreadfully for her lost kitten Tom in ‘The Tale of Samuel Whiskers’, the clock and dresser that feature in ‘The Tailor of Gloucester’, the teapot from ‘The Tale of the Pie and the Partypan’ and the doll’s house ham and lobster from ‘The Tale of Two Bad Mice’. Children of all ages are entranced by the hundred-and-one objects familiar from Beatrix Potter’s detailed little illustrations. 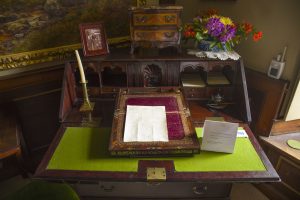 The secret of the books is in many ways the drawings, which combine accuracy with character and personality. Beatrix was meticulous in her research, even once climbing onto the roof gable to paint the view that Tom Kitten saw when he poked his head out of the chimney.

Across the field to the right is the large house Ees Wyke, formerly named Lakefield. This was a holiday home for the Potter family in 1896, when Beatrix first fell in love with the surrounding area. Her Journal has an entry for the 25th of July, 1896 which says ‘played much with Peter Rabbit’ (one of her pets at the time). ‘The Tale of Peter Rabbit’ was published five years later.

Satiated by bibliographical nostalgia, we head back along the path alongside the road to Far Sawrey, passing The Tower Bank Arms which appears in The Tale of Jemima Puddle-Duck. 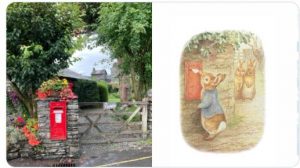