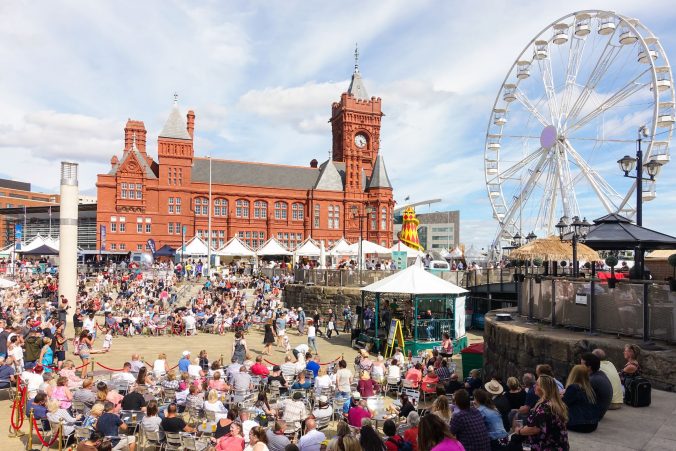 In the nineteenth century, Cardiff was the world’s greatest coal exporting port, and this created a diaspora around the docks of migrant communities from up to 45 nationalities that served the shipping business. These included Norwegian, Somali, Yemeni, Spanish, Italian, Maltese, Caribbean and Irish people, creating the unique multicultural character of the area that became known as ‘Tiger Bay’.

Roald Dahl became the most famous child-of-an-immigrant of them all, born in Cardiff in 1916 to Norwegian parents. His father Harald Dahl had moved to the city in 1900, setting up a business as a shipbroker, importing timber in the form of pit props from Norway and exporting coal. He did well and moved to the fashionable suburb of Llandaff. 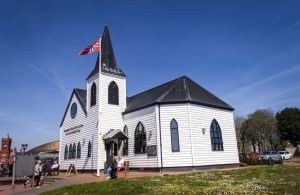 The Norwegian Church on Cardiff Bay is Cardiff’s most evident and evocative link to the Dahl family. An attractive white clapboard building, it was established in 1868 by the Norwegian Seamen’s Mission. The Dahl family worshipped at it, and Roald was christened here in 1916. Today the building is an arts centre and café. When the church had fallen into disrepair in the 1970s, Roald was at the forefront of a campaign to raise money to save it.

At the age of nine, Dahl set out for boarding school in Weston-Super-Mare, Somerset. He would travel on an old steamer ship from Cardiff Docks and suffered from terrible homesickness for his house and family in Wales. As he wrote:

‘The Bristol Channel was always my guide, and I was always able to draw an imaginary line from my bed to our house over in Wales. It was a great comfort.’

During his first term, he faked a remarkably accurate appendicitis and much to his delight was sent home across the Bristol Channel. But even the master storyteller couldn’t get away with it every time; a kindly doctor let him have a couple of days at home before the boy had to return to school.

Roald Dahl Plas was named in honour of him when it was created in 2000. It is an oval-shaped open space surrounded by illuminated pillars, often used to host concerts and other cultural events.

Cardiff Bay (or ‘Tiger Bay’) has also been home to other notable writers who were the children of migrants.

In 1970 Bernice Rubens was the first woman to win the Booker Prize, with ‘The Elected Member’. Her father was Lithuanian Jewish and her mother Polish.

Trezzo Azzopardi was born to a Maltese father and a Welsh mother. ‘The Hiding Place’ was also Booker-nominated in 2000.  It is the story of a Maltese family living in Cardiff during the 1960s.