‘I took the idea of the hobbits from the village people and children.’ 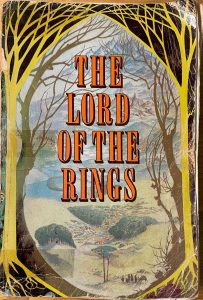 The inspiration for this walk…Lord of the Rings (1948)

The Lord of the Rings was a hand down from my brother, for whom it was a hand down from my sister. And it got devoured by each of us in turn, me when we went on a family canal trip when I was about ten — there always seemed to be plenty of time between locks to get down to some serious reading, and I was done with by the time we handed the lock gate key back at the end of the week. I am not sure that I have ever read a book since that I have become so immersed in – coming out the other end was light blinking into daylight.

If the book was becoming a cult classic when I read it, it most certainly is now, and the films have re-kindled and extended a fascination for all things Tolkein. He is now widely accepted as the ‘father’ of modern fantasy literature.

The copy pictured is our battered family edition, published in 1968 by George Allen & Unwin. 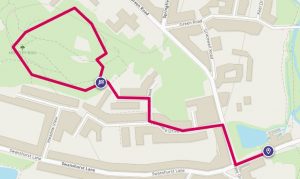 Tolkien came from a long line of Birmingham craftspeople, and his early years in the rural outskirts of Birmingham greatly influenced his writing.

His father died when Tolkien was very young, and in 1896 the family moved to Sarehole, then a rural village but now annexed to Birmingham. After his mother’s death in 1904, Tolkien grew up in the Edgbaston area of Birmingham and attended King Edward’s School. He subsequently went up to Oxford.

He considered the West Midlands dialect of Middle English to be his own ‘native language’, and, as he wrote to W. H. Auden in 1955, ‘I am a West-midlander by blood and took to early west-midland Middle English as a known tongue as soon as I set eyes on it’.

His childhood home had a special place in his heart, as he explained in a 1966 interview: ‘I was brought back to my native heath with a memory of something different – hot, dry and barren – and it intensified my love of my own countryside. I could draw you a map of every inch of it. I loved it with an intensity of love that was a kind of nostalgia reversed. It was a kind of double coming home, the effect on me of all these meadows.’

‘I was happy running about in that country. I took the idea of the hobbits from the village people and children.’

‘The hobbits are just what I should like to have been but never was – an entirely unmilitary people who always came up to scratch in a clinch.’

Tolkien once said that his writing about hobbits ‘began partly as a Sehnsucht’ – a wistful yearning – ‘for that happy childhood which ended when I was orphaned.’

We start the walk at Sarehole Mill which Tolkien said ‘dominated my childhood. ‘It was kind of a lost paradise. There was an old mill that really did grind corn, with two millers, a great big pond with swans on it, a sandpit, a wonderful dell with flowers, a few old-fashioned village houses and, further away, a stream with another mill. I always knew it would go – and it did.’

Tolkien and his brother would swim in the millpond, which was alive with swans and other wildlife. They would forage for blackberries and be chased away by the miller and his son, whom John later described as ‘characters of wonder and terror to a small child’.

These encounters inspired the creation of Hobbiton miller Ted Sandyman, detailed in Tolkien’s 1977 biography as the ‘white ogre’, the son of another miller who ‘frightened the boys with his white dusty clothes and sharp-eyed face’.

The mill is an anchor point of security and continuity in The Hobbit. Bilbo Baggins ran ‘as fast as his furry feet could carry him down the lane, past the great Mill, across The Water and then on for a mile or more.’ 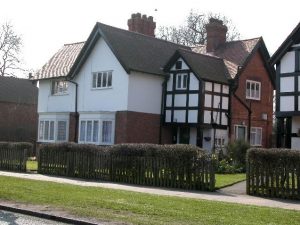 We walk past the millpond and a little way up Wake Green Road to see Tolkien’s childhood home at No. 264 (private). This unassuming but well-built home was brand new when they moved in. 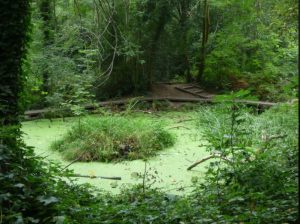 Moseley Bog (‘Bumble Dell’) is a remnant of the Old Forest of Arden, which dates back more than a thousand years. Another part of the forest had been the setting for Shakespeare’s play ‘As You Like It’, where the Duke finds ‘tongues in trees, books in running brooks,’ much as Tolkien was to do almost exactly three hundred years later.

For him, it was the inspiration for the Old Forest, on the edge of the Shire. ‘It was not called the Old Forest without reason, for it was indeed ancient, a survivor of vast forgotten woods,’ he wrote in The Fellowship of the Ring.

The Bog sits under a canopy of centuries-old trees, like those Old Forest trees whose trunks Tolkien described as ‘of innumerable sizes and shapes: straight or bent, twisted, leaning, squat or slender, smooth or gnarled and branched’.

In his stories, Tolkien gives us all kinds of forests and groves in which to find adventure, and for him, trees are a place of refuge and safety. We know he used to climb a tree here with his brother, hoist up a basket of treats and escape from the world. This experience brings to mind a passage in the Hobbit when the dwarves, desperate to know how far Mirkwood extends, send Bilbo up a huge oak tree to peer above the forest canopy. Bilbo sees the great treetops all around him ‘ruffled here and there by the breeze; and…everywhere hundreds of butterflies.’

The inspiration of the Arts & Crafts Movement

Tolkien was growing up when the Arts & Crafts movement was in its pomp, and Birmingham was its birthplace and anvil. He went to the same school, housed in a neo-Gothic building designed by Sir Charles Barry (sadly demolished), that Pre-Raphaelite painter Edward Burne-Jones had attended in the 1840s.

Burne-Jones and William Morris had originally intended to join the priesthood, but in 1855, returning to Burne-Jones’ house in Bennett’s Hill in Birmingham, they decided instead to pursue careers in the visual arts, Burne-Jones resolving to become a painter and Morris an architect. The following day they discovered a copy of Malory’s ‘Morte d’Arthur’ in a Birmingham bookshop, which was to be one of their great inspirational works. They gathered together a group of like-minded individuals that became known as ‘The Birmingham Set’ and the Arts & Crafts movement was born.

Tolkien was much influenced by William Morris’s prose and poetry romances, from which he took hints for the names of features such as the Dead Marshes in The Lord of the Rings, along with some general aspects of approach, including his embellished hand-drawn maps of Middle-earth. And another Tolkien influence was also the Arthurian legends – he wrote an unfinished poem called the ‘Fall of Arthur’.

The Elves in ‘The Lord of the Rings’, representing ‘beauty and grace of life and artefact’, embody the Arts & Crafts way. Rivendell and Lothlorien provide the fellowship with artefacts of grace and utility; and especially in Gondolin – a veritable collage of crafts, from masonry and metalwork to ‘weaving and spinning, broidure and painting’.

We visit the Birmingham Museum and Art Gallery, which has a world-renowned collection of works by Burne-Jones and the Pre-Raphaelites; and admire the delightful architecture of the Birmingham School of Art (1885), the first Municipal School of Art and the leading centre for the Arts and Crafts Movement

If you have more time, visit the Jewellery Quarter and watch craftspeople at work. To this day it has Europe’s largest concentration of businesses involved in the jewellery trade and produces around half of all the jewellery made in the UK (Brummies, like Gollum, know all about rings…)

After his mother died, Tolkien moved to Edgbaston and lived in the shadow of 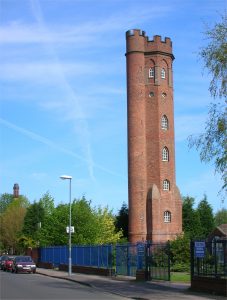 Perrott’s Folly (B16 9AL) and the Victorian tower of Edgbaston Waterworks (B16 9DD), which are popularly believed to have influenced the images of the Two Towers of Gondor in ‘Lord of the Rings’. Both can be seen from the far end of Stirling Road, where Tolkien lived for nearly four years. 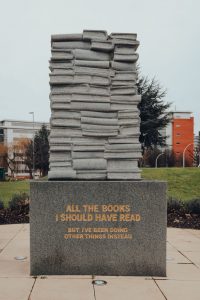 Admire: The Book statue at Aston University by Marko Maetamm.