‘It is a beautiful place,’ said Poirot. ‘A beautiful house, beautiful grounds. It has about it a great peace, great serenity.’ 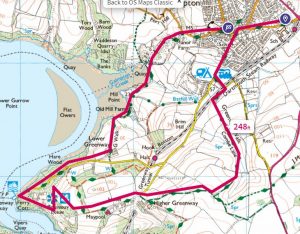 Agatha Christie said of herself: ‘My chief dislikes are crowds, loud noises, gramophones and cinemas. I dislike the taste of alcohol and do not like smoking. I DO like sun, sea, flowers, travelling…pianos, and doing embroidery.’

Much of this might explain why she liked her Devon retreat, Greenway House, with its grand piano in the drawing-room and sweeping views of the estuary, so much! It was love at first sight for her and her husband, the archaeologist Max Mallowan, when they spotted it on the market in 1938: 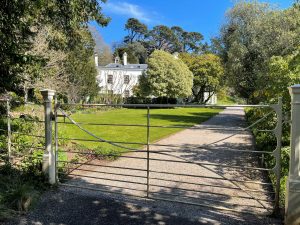 ‘One day we saw that a house was up for sale that I had known when I was young … So, we went over to Greenway, and very beautiful the house and grounds were. A white Georgian house of about 1780 or 90, with woods sweeping down to the Dart below, and a lot of fine shrubs and trees – the ideal house, a dream house’ (Humphry Repton no less had been involved in the original garden design).

They lived there for the rest of their lives, and it featured in several of her novels, The A.B.C. Murders (1936), Five Little Pigs (1942), Towards Zero (1944) and Dead Man’s Folly (1956), in which the house is described as ‘White and beautiful in its setting of dark trees… A gracious house, beautifully proportioned.’ ITV’s Poirot episode Dead Man’s Folly (2013) was filmed here, starring David Suchet.

We alight the steam train at Churston Station, Agatha’s favourite way of arriving (and Poirot’s too…) Agatha used this spot in The A.B.C. Murders. The character Sir Carmichael Clarke, a wealthy man from Churston, is one of three victims to have a copy of the ABC Railway Guide left by his body.

As we head along Coombe Lane, so we start to enjoy panoramic views over the Dart Estuary – the sort of view that makes you fall in love with a place.  In every direction, classic Devon hills. ‘Practically all the hills in Devon,’ according to Christie, ‘are just the right shape.’ I know what she means – the type of hill a child would draw, steep but short, often catching walkers very short of breath. The woods to our south, Oakham Hill, were once used for the building of warships in Dartmouth. 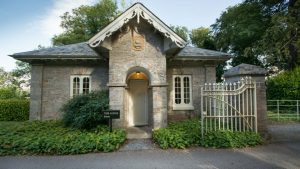 Then the hushed anticipation of approaching a country house, past the Lodge in ‘cottage orné’ style that was featured in Dead Man’s Folly, as the home of Amy Folliat, the former owner of Nasse House, somehow expecting to be run over by a 1920s Rolls Royce… 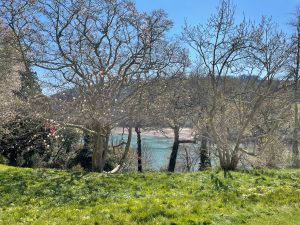 Greenway House is all about its setting, with spectacular views over the estuary and magical grounds sweeping down to the water’s edge. We head into the house first and admire all the Agatha Christie paraphernalia.

We pause in the drawing-room and imagine Christie reading her latest manuscript to her family – their job would be to guess ‘whodunit.’ We see her favourite chair and her beloved Steinway piano. Apparently, she played to almost concert standard, but crippling shyness prevented her from ever performing in public. Only her husband Max Mallowan was allowed to listen to her. 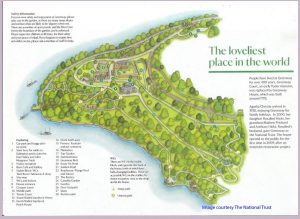 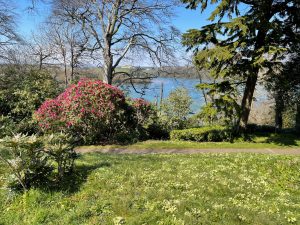 ‘Just came to Greenway. The garden looks wonderful – all bursting with plants. It really does look professional at last.’

The house is fascinating, but it’s the grounds of Greenway that we really fall in love with. Christie, although she never wrote her novels while staying here, used features from the garden in several of her novels. You can imagine her taking our exact route and conjuring up plots in her mind…

The meandering footpath down to the river is fringed with monkey puzzle trees, narcissi, camellias and rhododendrons. For the rather fastidious Poirot, the route down was confusing rather than a source of pleasure; ‘So many paths, and one is never sure where they lead. And trees, trees, trees’. Let’s hope he wasn’t wearing his patent leather shoes, damage to which is frequently a source of misery for him.

We reach the battery, facing out onto the River Dart, which provided the scene for a murder in Five Little Pigs. ‘Mr Crale had been painting in a small enclosed garden, known as the battery garden, from the fact it overlooked the sea, and had some miniature cannon placed in embattlements. It was situated at about four minutes’ walk from the house…downwards through some woods…[He] was reclining on a seat and he was dead.’ We recline on a bench alongside in the battery and have never felt more alive! 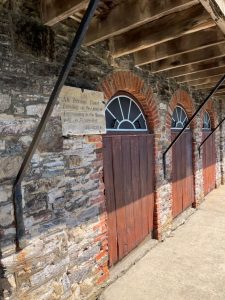 A little further down the path beyond the battery, we come to the boathouse, the scene of the discovery of the victim’s body in Dead Man’s Folly. ‘They passed the Folly and zig-zagged down the path to the river.  The outlines of the boathouse showed beneath them. A short steep slope led down to the door of the boathouse which was built out over the river, with a little wharf and a storage place for boats underneath… [The victim] was playing her part nobly, sprawled on the floor by the window.’

We head upstream along a path, past an arbour with a semi-circular seat, where Christie liked to sit and enjoy the view. Just down from here is the ferry crossing to Dittisham.  ‘In a mood of exploration Poirot went through the front gates and down the steeply twisting road that presently emerged on a small quay. A large bell with a chain had a notice upon it: ‘Ring for the Ferry.’ 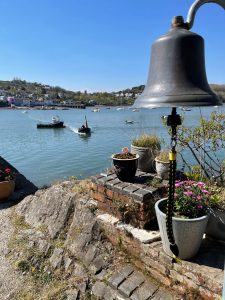 There it is, exactly as described, and if you have time take a trip across to the delightful village of Dittisham.

Galmpton Creek has been a boatbuilding centre for centuries, and in its heyday over 300 sailing trawlers were built here, as well as wooden motor torpedo boats during WWII. It is still a bustling marine repair centre, but its use nowadays is mostly for pleasure craft.

Finally, we get back to the station, un-murdered and very much elevated by a truly delightful stroll.