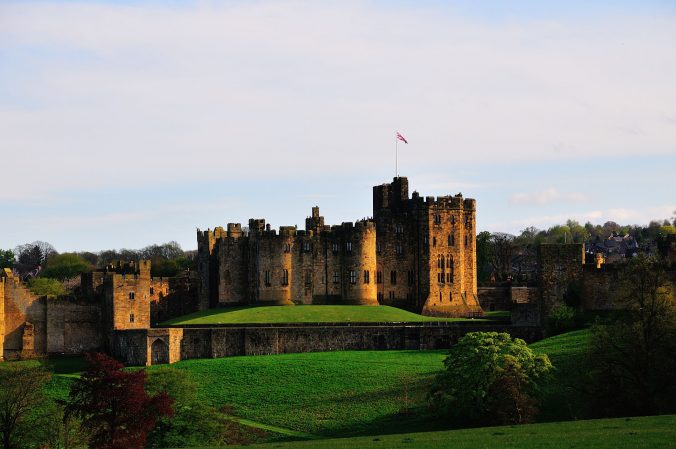 ‘The Hogwarts of the North’

The Harry Potter series of novels has sold over 500 million copies, making it the best-selling book series in history. The films have also been immensely popular, and a sub-world of tourism has built up to see the places where the films were shot.

Ever since JK Rowling first published her account of the ‘boy who lived’, theories about the inspirations for Harry Potter – and the magical world he inhabits – have abounded. Cafés and landmarks everywhere from Scotland to Portugal display signs claiming to have played host to the author while she wrote the novels – or, more boldly, to be the basis for the likes of Hogwarts, Diagon Alley and Hogsmeade.

JK Rowling herself was a little more circumspect about her inspirations: ‘If you define the birthplace of Harry Potter as the moment when I had the initial idea, then it was a Manchester-London train,’ she wrote. ‘But I’m perennially amused by the idea that Hogwarts was directly inspired by beautiful places I saw or visited, because it’s so far from the truth.’

‘A truthful tour of HP ‘inspirations’, she continued ‘would involve a stationery guide pointing a stick at a picture of my head, which would be zero fun, and nobody would buy tickets. If I’d genuinely been inspired by every old building, creepy alleyway, pub, graveyard and underpass that’s claimed, I’d have spent my late twenties on a non-stop road trip between locations, and I promise I didn’t. I was mostly sitting in places I could get a cheap coffee/could afford the rent and making it all up.’

So, it’s best we turn to the film locations to be inspired, and none is more inspirational than Alnwick Castle, home of broomstick flying and Quidditch. 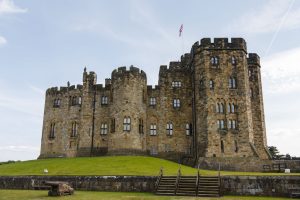 The Outer Bailey is recognisable as the area where Harry and his fellow students learned to fly broomsticks with Madam Hooch. Harry also learned the rules of wizarding sport Quidditch in the Outer Bailey.

The courtyards and baileys of Alnwick Castle were used to film Hogwarts students and staff going about their daily activities. ​Harry and Ron crash-landed the Weasley family’s flying Ford Anglia car into the Whomping Willow in the Inner Bailey.

The Lion Arch was a way in and out of Hogwarts, heading towards Hagrid’s cabin and the Forbidden Forest. The mounds next to the path were especially helpful in making Hagrid actor Robbie Coltrane look much taller than Daniel Radcliffe’s Harry Potter.

Take: A film location tour when you visit. Book ahead. 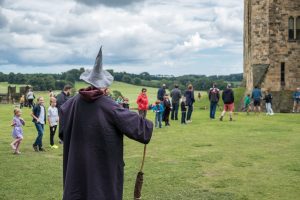 Learn How: To fly a broomstick. When you arrive, check the “What’s On” board to see what time the classes will be taking place for the day of your visit.

Eat At: Alnwick Gardens, in the world’s largest Treehouse Restaurant.

Check Out: Harry Potter filming locations throughout the UK, check them out at https://www.alnwickcastle.com/harry-potter-filming-locations#filter=*