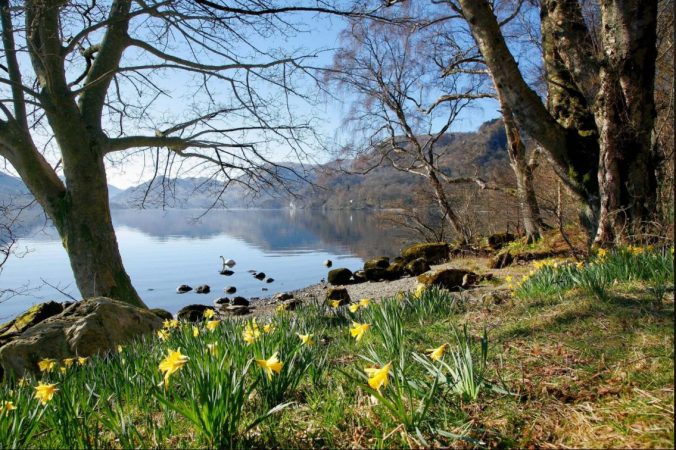 ‘Beside the lake, beneath the trees, fluttering and dancing in the breeze’

Imagine for a moment this ‘spot in time’. The spot is between the main road and the water at the south end of Glencoyne Bay, now also known as Wordsworth Point. The time is April 15th, 1802, vividly described by Dorothy Wordsworth in her Journal:

‘When we were in the woods beyond Gowbarrow Park we saw a few daffodils close to the waterside. But as we went along there were more and yet more and at last under the boughs of the trees, we saw that there was a long belt of them along the shore, about the breadth of a county turnpike toad. I never saw daffodils so beautiful. They grew about the mossy stones about and about them, some rested their heads upon these stones as on a pillow for weariness and the rest tossed and reeled and danced and seemed as if they verily laughed with the wind that blew upon them over the lake’.

We are standing at the very same spot, the time is the best we can do without a time machine, the right time of year which, given changing climate conditions is now the start of April. And we too experience the same beautiful sea of daffodils.

Dorothy’s famous Grasmere Journals, a day-to-day account of life between 1800 and 1803, written ‘to give Wm Pleasure by it’, provided recollections, ideas and even adjectives and verbs used in his poems. ‘She gave me eyes, she gave me ears’, Wordsworth declared.

Five years later Wordsworth published perhaps his most famous poem, The Daffodils, based on that day and record: 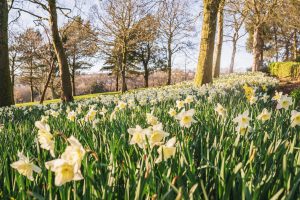 ‘I wandered lonely as a cloud

That floats on high o’er vales and hills,

When all at once I saw a crowd,

A host, of golden daffodils;

Beside the lake, beneath the trees,

Fluttering and dancing in the breeze.

Continuous as the stars that shine

And twinkle on the milky way,

They stretched in never-ending line

Along the margin of a bay:

Ten thousand saw I at a glance,

Tossing their heads in sprightly dance.

The waves beside them danced; but they

Out-did the sparkling waves in glee:

A poet could not but be gay,

In such a jocund company:

I gazed – and gazed – but little thought

What wealth the show to me had brought:

For oft, when on my couch I lie

In vacant or in pensive mood,

They flash upon that inward eye

Which is the bliss of solitude;

And then my heart with pleasure fills,

And dances with the daffodils.’

The woods in question are at the south end of Glencoyne Bay, also known as Wordsworth Point. Grid Ref: NY 387 183

Park at Glencoyne National Trust car park (CA11 0QT) and walk south along the road until a track takes off between the road and the lake. Follow this to the woods and the daffodils (early April).

TAKE A LONGER WALK: the National Trust has some excellent suggestions: https://www.nationaltrust.org.uk/aira-force-and-ullswater/lists/great-walks-in-ullswater

VISIT: Dora’s Field (LA22 9LX), alongside St Mary’s Church in Rydal, is another great place to see daffodils. After his daughter Dora died in 1847, William went down to the field between Rydal Mount and the main road, and together with his wife, sister and gardener, planted hundreds of daffodils as a memorial to Dora. Also good for bluebells.

VISIT: Grasmere Daffodil Garden (LA22 9SW), situated beside St Oswald’s in Grasmere and daffodils can be planted there in your name.