‘All the places in the books are to be found, but not arranged quite as the ordnance maps’

The inspiration for this walk…Swallows & Amazons (1930s) 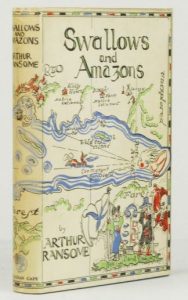 I must have scorched through the Swallows and Amazon series in a matter of weeks when I was about eight years old.

My mother took me to the library each Friday and I tore down the children’s aisle to see if the book I wanted had come back from loan. I would squeal with delight if an unread book was there and hastily take it to the librarian to get it stamped with a return date way after I knew I would finish it.

But the worst thing about an addictive series is when they come to an end. Or rather, not in this case, quite the end, as there were twelve books in the series altogether, but only the first six were set in the Lake District.

One faithfully read the others too, and each had merit, but never it seemed the magic of the original six, that sense of mysterious adventure and derring-do set around a lake.

My dream was over, and the subsequent films only made things worse, peeling off the veneer of magic still further. And, although, I think I tried to introduce my two sons to the series, its moment had passed. Harry Potter had come to town. So, there it remains, lodged in my imaginative mind for ever and a day, never to be disturbed, now to most quaint and old-fashioned.

The first edition (pictured) is currently for sale in my local second-hand bookshop, St Mary’s Books of Stamford, for £15,500. 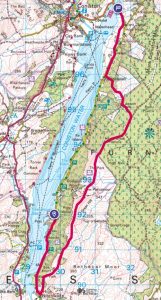 Arthur Ransome fell in love with The Lakes almost from the moment that he was born, a love that was to last all his life. He holidayed there every year as a child for up to three months at a time and was lugged up the Old Man of Coniston when ‘no younger human can ever have been there’. Throughout his life, he visited and often had a home there too.

He had a perfect summer childhood, which he described as being ‘free in paradise’.  He wrote:

‘I have often been asked how I came to write Swallows and Amazons. The answer is that it had its beginning long, long ago when, as children, my brother, my sisters and I spent most of our holidays on a farm at the south end of Coniston. We adored the place. Coming to it we used to run down to the lake, dip our hands in and wish, as if we had seen the new moon. Going away from it, we were half-drowned in tears. While away from it, as children and as grown-ups, we dreamt about it. No matter where I was, wondering about the world, I used at night to look for the North Star and, in my mind’s eye, could see the beloved skyline of great hills beneath it. Swallows and Amazons grew out of those old memories. I could not help writing it. It almost wrote itself.’

Ransome’s writing is noted for his detailed descriptions of activities. Although he used many actual features from the Lake District landscape, he invented his own geography, mixing descriptions of different places to create his own juxtapositions. He reflected on this:

‘The country is the country of my own childhood… there has to be a little pulling about of rivers and roads, but every single place in these books exists somewhere and by now I know the geography of the country in the books so well that when I walk about in actual fact, it sometimes seems to me as if some giant or earthquake has been doing a little scene shifting overnight.’

Or as he responded to the frequent enquirers of where spots were: ‘The only way to keep a secret (your own and other people’s) is NEVER to answer a question. But you seem good at guessing. All the places in the book are to be found, but not arranged quite as in the ordnance survey’s maps.’ 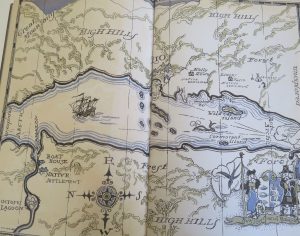 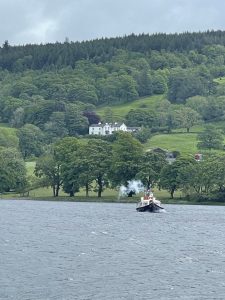 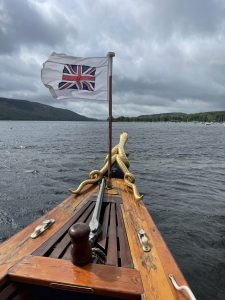 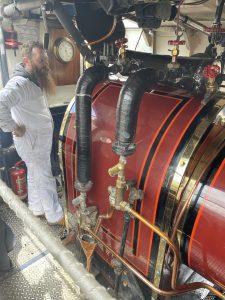 We start spotting Swallows & Amazons stuff before we even have to start walking! We embark on Steam Yacht Gondola, taking the South Lake Cruise from Coniston at 10.45 am which runs daily from 27 March to 31 October (weather permitting, which it usually does, albeit it may be drizzling…)

As an eight-year-old boy, Ransome travelled on this very vessel with its serpent figurehead and was allowed to take the helm by the captain, whom he considered to be a good friend. To help the illustrator depict Captain Flint’s houseboat in Swallows & Amazons, he marked his imagined adaptations on a photograph of her, vividly describing her lines, and was narked when the mast was forgotten. 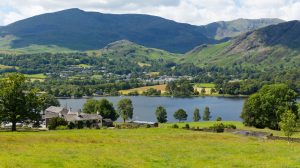 Our first spot is ‘The Heald’ on the eastern shore, with its own long stretch of lakeside, which Ransome lived at from 1940 (below Heald Brow on the map). He found the Heald very special, describing it to a friend as somewhere that ‘I have been in love with since the age of nine’. It has a view across the lake to the Old Man of Coniston, the inspiration for the towering ‘Kanchenjunga’ in ‘Swallowdale’. When the intrepid explorers reached the summit, they felt they were ‘on top of the world’. 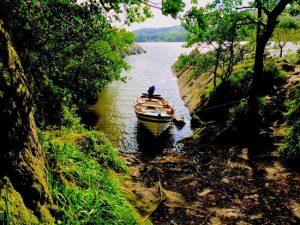 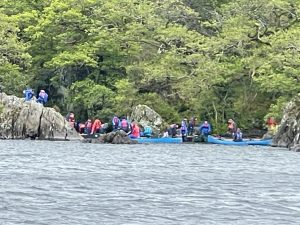 As we reach the southern end of the lake, we see Peel island, The Wild Cat Island of Swallows & Amazon fame. This is where Ransome used to come for picnics as a young boy. There really is a hidden harbour here on the southern side, with steep rocks on either side and if you have your own boat you are free to land here and take yourself back into the book…the day we pass it is full of young explorers in kayaks.

We disembark at Parkamoor Jetty, just north of Peel Island and head south down the road. 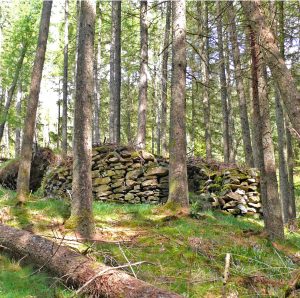 At the southern end of Rigg Wood there are rows of tall larches and among them, almost within sight of the road itself, is a very promising-looking igloo, probably once a bark peelers or a charcoal burner’s hut. (Note on finding this spot: there is a very low stone wall to our right. When the wall ends, we turn left into the forest). This is the tumble-down stone hut that the Swallows and Amazons converted to an igloo in ‘Winter Holiday’ – we can just imagine them adding a sheet of iron and lots of packed snow to create the full effect and recall the efforts in our own back gardens with our children to create an igloo.

We continue our walk along the small road towards High Nibthwaite.

As we emerge from the wood, so we spot Brown Howe House on the western shore which, with its lawns running down to the lake, is an excellent contender for Beckfoot, the home of the Blacketts (Nancy, Peggy, Mrs Blackett and – sometimes – Captain Flint).

High Nibthwaite soon comes into view before us. This was the spot that Ransome came to every summer as a child with his family. 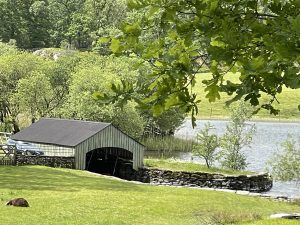 We look down towards Slate Quay to see the ‘Amazon’ boathouse. The boathouse came to be owned by Bridgit Sanders, who was the inspiration for the youngest of the Swallows Vicky, the ship’s baby.

This quay is where Ransome used to perform a secret rite:

‘Without letting the others know what I was doing, I had to dip my hand in the water, as a greeting to the beloved lake or as a proof to myself that I had indeed come home. In later years, even as a young man, I have laughed at myself, resolved not to do it, and every time I have done it again.’ Naturally enough, we feel compelled to do the same.

We turn back north along a metalled track and pass the very place the Ransomes used to stay, Swainson’s Farm (now Laurel Cottage – private).

If you have the time, it’s worth taking a climb up Brock Barrow to get a good view of ‘Octopus Lagoon’. 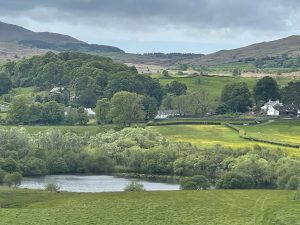 We look down from the hill to the end of the lake and can see Allan Tarn. Here the Swallows stage a night raid to try and capture the Amazon. ‘Here’s the lagoon, said Susan and the boat shot out into a small lake almost covered by big patches of broad-leaved water lilies. Even in daylight, it was hard not to catch them with the oars.’  We can spot that one side of the tarn is still covered by water lilies.

Heald Wood was the name of the place where Titty and Roger met the charcoal burners in Swallowdale. The ground beneath the trees in the steepest parts of the woods here is peppered with charcoal burners’ pitsteads (flat circular or elongated platforms) to this day. The nearby Lawson Park, now an arts centre, was first recorded under the ownership of the Cistercian monks in the 13th century when it was used as a base for charcoal burning. 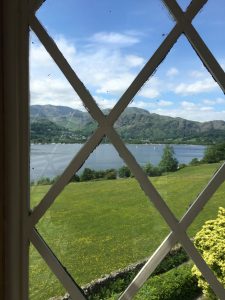 Brantwood House is a delight to visit (charges apply) and you can cut in the back from the path we are taking.

This is the former home of John Ruskin. We especially love the view from the turret, which he built when he came to the house in 1871. The turret room is often thought to be the inspiration for the North Pole’s origin in ‘Winter Holidays’.

A frequent visitor to Brantwood House was W.G. Collingwood, painter, archaeologist and translator of Nordic sagas. He acted as John Ruskin’s assistant until the latter’s death in 1903. He lived in the nearby property of Lanehead.

Arthur Ransome’s favourite book as a boy was W.G. Collingwood’s Norse adventure, ‘Thorstein of the Mere’ (1895), and he met the Collingwoods and their children soon after he first read it. Thereafter the Collingwoods became his ‘second family’: he spent as much time as he could at Lanehead and learned to sail a dinghy there, the Swallow.

The Collingwood grandchildren (Taqui, Susie, Mavis, Titty, Roger and Brigit) and their parents (the Altounyans) would usually stay at the nearby Bank Ground Farm adjacent to Lanehead, as there were so many in the family party.

At the start of their stay in 1928, they acquired two thirteen-foot dinghies and Ransome helped the children to learn to sail. One of the boats was named Swallow, after the Collingwood’s old boat; the other was called Mavis, which was also Titty’s real name. She was subsequently renamed Amazon and you can see her at the Windermere Steamboat Museum.

On Ransome’s birthday that year, the Altounyan family presented him with a pair of Turkish slippers. Later, in return, he wrote a book for the children to remind them of their home in the lakes. It was dedicated ‘to the six for whom it was written in exchange for a pair of slippers’. The book was Swallows and Amazons. Clearly, several members of the Walker family were based upon the Altounyan children. 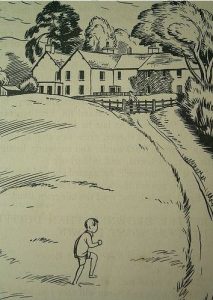 As we walk past the farm, we look down the field towards the lake, and recall the opening of Swallows and Amazons: ‘Roger, aged seven and no longer the youngest of the family, ran in wide zigzags, to and fro, across the steep field that sloped up from the lake to Holly Howe, the farm where they were staying for part of the summer holidays…

…each crossing of the field brought him nearer to the farm. The wind was against him and he was tacking up against it to the farm where at the gate his patient mother was awaiting him.’ By chance the day we are walking it’s an easterly too, so we know how it feels Roger!

We catch the gondola back from Monk Coniston jetty, departing at 14.07 and 16.07. But you could also walk back along the shoreline to Coniston if you are not yet done with walking.

Swallows & Amazons was my favourite book as a boy, thank you, Arthur Ransome.