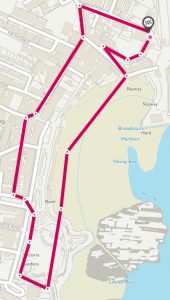 The life and works of Charles Dickens are closely connected with Kent; it was the county he moved to when he was five, and many scenes from his books took place in various spots here.

Dickens was a keen walker and, as well as his famous walks in London, he enjoyed striding through the Kent countryside. He particularly liked Broadstairs and brought his family here for at least a month’s holiday every summer from 1839 to 1851.

Charles Dickens was a prodigious walker. Whether on his night walks through London, or tramping through the Kent countryside, Dickens clocked up a huge number of miles on foot. He is estimated to have walked twelve miles per day, and he also walked very quickly, at about 4 mph. ‘If I couldn’t walk fast and far, I should explode and perish,’ he once wrote to a friend. He was so fast he once considered entering a walking race. Today he would undoubtedly wear a pedometer and be one of those 10,000 steps a day folks.

‘My walking is of two kinds: one, straight on end to a definite goal at a round pace; one, objectless, loitering, and purely vagabond. In the latter state, no gipsy on earth is a greater vagabond than myself; it is so natural to me, and strong with me, that I think I must be the descendant, at no great distance, of some irreclaimable tramp.’

Dickens walked mostly alone, and for him walking time was thinking time, acutely attuned to the significance of his surroundings, uncovering a meaning or an emotion behind the object or person he was describing.

No doubt Dickens would have known the route we are taking today like the back of his hands and done it twice as quickly as us! 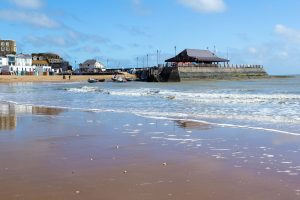 Let’s follow the route that Dickens must have taken regularly from his main residence, Fort House (now named Bleak House), during those long summer breaks.

The striking house, originally built in 1801, is perched on a hilltop overlooking the harbour and was the perfect spot for Dickens to watch the sea and observe everything that was going on. This was where he finished writing ‘David Copperfield’ (1850).

This is also the place where Dickens wrote an article about Broadstairs, called ‘Our English Watering Place’ (1851). It is a paean to the many delights of the town but, coupled with Dicken’s celebrity, it made Broadstairs such a  popular resort that it was no longer the tranquil refuge that he desired, and 1851 also turned out to be his last summer there.

‘In the Autumn-time of the year, when the great metropolis is so much hotter, so much noisier, so much more dusty or so much more water-carted, so much more crowded, so much more disturbing and distracting in all respects, than it usually is, a quiet sea-beach becomes indeed a blessed spot. Half-awake and half asleep, this idle morning in our sunny window on the edge of a chalk-cliff in the old-fashioned watering-place to which we are a faithful resorter, we feel a lazy inclination to sketch its picture.’

‘The place seems to respond. Sky, sea, beach, and village lie as still before us as if they were sitting for the picture. It is dead low water…But the ocean lies winking in the sunlight like a drowsy lion – its glassy waters scarcely curve upon the shore – the fishing-boats in the tiny harbour are all stranded in the mud – our two colliers have not an inch of water within a quarter of a mile of them, and turn, exhausted, on their sides, like faint fish of an antediluvian species. Rusty cables and chains, ropes and rings, undermost parts of posts and piles and confused timber-defences against the waves, lie strewn about, in a brown litter of tangled sea-weed and fallen cliff which looks as if a family of giants had been making tea here for ages, and had observed an untidy custom of throwing their tea-leaves on the shore.’

On our way down to the harbour, we pass Lawn House, now called Archway House, which was a less favoured summer residence where he wrote ‘The Old Curiosity Shop’ (1840) and ‘Barnaby Rudge’ (1841).

Our walk takes us along the delightful parade, and we pause at the Dickens House Museum, housed in the cottage that was Charles Dickens’ inspiration for the home of Betsey Trotwood in ‘David Copperfield’. David’s description of Betsey’s cottage with its square gravelled garden full of flowers and a parlour of old-fashioned furniture still fits today.

The character Betsy Trotwood is based on Miss Mary Pearson Strong who lived in this cottage. According to the reminiscences of Charles Dickens’ son Charley, he and his father regularly had tea and cakes in the parlour with the kindly and charming Miss Mary Pearson Strong. He also remembers that Miss Pearson Strong was completely convinced of her right to stop the passage of donkeys along the cliff top in front of her cottage.

Continuing along the parade, we enjoy the bustling beach scene, first popularised by Dickens in his famous essay written over 170 years ago, but he could pretty much be describing today too: 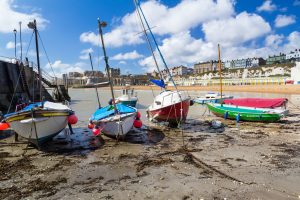 ‘At bathing-time in the morning, the little bay re-echoes with every shrill variety of shriek and splash – after which, if the weather be at all fresh, the sands teem with small blue mottled legs. The sands are the children’s great resort. They cluster there, like ants: so busy burying their particular friends, and making castles with infinite labour which the next tide overthrows, that it is curious to consider how their play, to the music of the sea, foreshadows the realities of their after lives.’

We walk through Victoria Gardens, an important location for the annual Dickens’ Festival, and swing back through Chandos Square. The house at the end has a plaque dedicated to Oliver Postgate, creator of ‘The Clangers’. We exit the northwest side of the square towards the High St. A short diversion left to 29 the High St reveals a plaque above For-Get-Me-Not. This is another place that Dickens stayed and where he wrote part of ‘The Pickwick Papers’ (1839).

Returning back along the High St, we pass The Royal Albion Hotel on our right, dating back to 1776. Look closer as there’s a plaque on the wall showing that Charles Dickens regularly stayed here on regular occasions and also wrote part of ‘Nicholas Nickleby’ (1839) here.

Take: a walk along the 4-mile route between Turner’s Margate and Dickens’ Broadstairs. Marvellous guide at: https://s3-eu-west-1.amazonaws.com/explore-kent-bucket/uploads/2015/02/17183835/turner-and-dickens-walk.pdf

Pay a visit: during the popular annual Dickens Festival in June. Find out more at www.broadstairsdickensfestival.co.uk

Read: ‘The Uncommercial Traveller’ (1860), Dickens’ series of essays linked by the idea of walking, 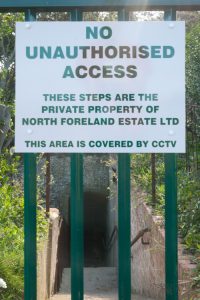 Discover: the inspiration for John Buchan’s ‘The Thirty-Nine Steps’ (1915). In July 1914 the Buchans rented a cliff-top villa called St Cuby in North Foreland which had a set of steps cut into the chalk that led down to a private beach. It was these steps that caught Buchan’s imagination. Read https://bestdeadends.wordpress.com/2013/11/23/broadstairs-39-steps/ to find out more.