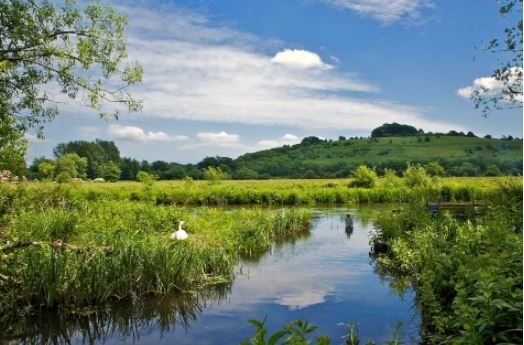 ‘The pleasantest town I was ever in’ 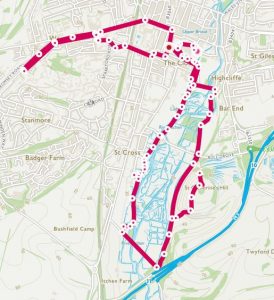 The Romantic poet, John Keats, stayed in Winchester during the late summer and early autumn of 1819, apparently to have access to a good library:

‘We removed to Winchester for the convenience of a Library and find it an exceeding pleasant Town, enriched with a beautiful Cathedrall and surrounded by a fresh-looking country.’

Walking, as it is to so many of us, was a cornerstone of Keats’ mental wellbeing and creative stimulation. He writes: ‘I take a walk every day for an hour before dinner and this is generally my walk. I go out at the back gate across one street, into the Cathedral yard, which is always interesting; then I pass under the trees along a paved path, pass the beautiful front of the Cathedral, turn to the left under a stone door way, – then I am on the other side of the building – which leaving behind me I pass on through two college-like squares (The Close) seemingly built for the dwelling place of Deans and Prebendaries – garnished with grass and shaded with trees. Then I pass through one of the old city gates (Kingsgate) and then you are in one College Street through which I pass and at the end thereof crossing some meadows and at last a country alley of gardens I arrive, that is, my worship arrives at the foundation of Saint Cross, which is a very interesting old place, both for its gothic tower and alms-square, and for the appropriation of its rich rents to a relation of the Bishop of Winchester. Then I pass across St Cross meadows till you come to the most beautifully clear river – now this is only one mile of my walk I will spare you the other two till after supper when they would do you more good.’

It was after just such a walk, on Sunday 19 September 1819, that he penned his ode ‘To Autumn’ on his return, one of the most often anthologised poems in the English language.

Recently, there has been some debate as to whether it was the water meadows that inspired him, or St Giles Hill or Hyde Abbey, which would have been more likely to have had ‘stubble-plains’. But does it really matter, it was probably some combination of all of them? As he explained to a friend:

‘You speak of Lord Byron and me – There is this great difference between us. He describes what he sees – I describe what I imagine. Mine is the hardest task.’

‘Season of mists and mellow fruitfulness,

Close bosom-friend of the maturing sun;

Conspiring with him how to load and bless

With fruit the vines that round the thatch-eves run;

To bend with apples the moss’d cottage-trees,

And fill all fruit with ripeness to the core;

To swell the gourd, and plump the hazel shells

With a sweet kernel; to set budding more,

And still more, later flowers for the bees,

Until they think warm days will never cease,

For summer has o’er-brimm’d their clammy cells.

Who hath not seen thee oft amid thy store?

Sometimes whoever seeks abroad may find

Thy hair soft-lifted by the winnowing wind;

Or on a half-reap’d furrow sound asleep,

Drows’d with the fume of poppies, while thy hook

Spares the next swath and all its twined flowers:

Steady thy laden head across a brook;

Or by a cyder-press, with patient look,

Thou watchest the last oozings hours by hours.

Think not of them, thou hast thy music too,-

And touch the stubble-plains with rosy hue;

Then in a wailful choir the small gnats mourn

Among the river sallows, borne aloft

Or sinking as the light wind lives or dies;

The red-breast whistles from a garden-croft;

Winchester can justifiably lay claim to be one of the country’s great literary cities, with notable links to Izaak Walton (The Compleat Angler, 1653, ‘I have laid aside business, and gone a-fishing’, ‘Angling is somewhat like poetry, men are to be born so: I mean, with inclinations to it, though both may be heightened by discourse and practice’), who fished in the River Itchen; Jane Austen (died here and buried in the cathedral), Thomas Hardy (‘Tess of the d’Urbervilles’), Anthony Trollope (‘The Warden’) and Arthur Conan Doyle (three books set here) amongst others. 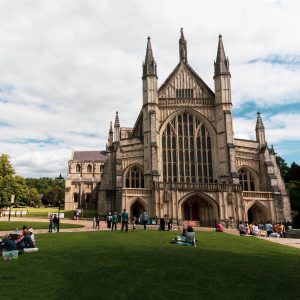 Keats’ lodgings were at the western arm of Colebrook Street, probably No. 45, so this is where we start our walk. His daily walk took him ‘out at the back gate across one street, into the Cathedral yard’ i.e. via Paternoster Row, after which he strolled in the cathedral grounds and took the lime-tree walk, just opposite Amen Corner, and around the northern side until he reached the front of the cathedral.

Two years previously Jane Austen had been buried here, although there is no mention of her literary occupation on her memorial in the north aisle. Apparently, Keats would stride up and down this aisle reading letters from his fiancée Fanny Brawne which used to distress him somewhat.

We take the exact route that Keats describes, going via The Close, College Street and College Walk, then alongside the River Itchen and through the water meadows, along what is now called Keats Walk.

Izaak Walton spent his final years in 7 The Close. He is buried in Prior Silksted‘s chapel in the cathedral.

Jane Austen decided to consult a Winchester doctor as her health worsened and spent the last few weeks of her life at Number 8 College Street, where she composed the comic verse ‘Venta’, her last piece of writing. She died on 18 July 1817.

We walk through the Water Meadows as Keats did, alongside the River Itchen with its trout, moorhens and wildflowers. In a riverside allotment, we find swelling gourds and apple trees bent under the weight of their fruit, just as Keats describes. 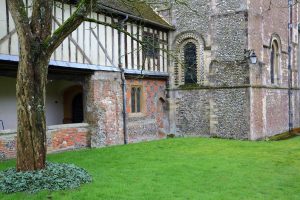 We soon arrive at the Hospital of St Cross.  Keats found it ‘a very interesting old place, both for its gothic tower and alms-square, and for the appropriation of its rich rents to a relation of the Bishop of Winchester’ – a reference to a contemporary corruption scandal which was one of the themes of Anthony Trollope’s novel The Warden (1855) 35 years later.

Founded in 1136, the hospital is the country’s oldest charitable institution and still functions as an almshouse. As we arrive on foot, we may ask for the Wayfarer’s Dole, bread and ale which has been given to travellers ever since the almshouse was founded.

Where next on our walk? Keats teases us a little: ‘Then I pass across St Cross meadows till you come to the most beautifully clear river – now this is only one mile of my walk I will spare you the other two till after supper when they would do you more good.’

We think we know exactly where this two-mile route went…

…any keen walker, which clearly Keats was, would feel impelled to climb up St Catherine’s Hill, on the top of which was an Iron Age hillfort. In the centre there is a copse of beech trees that contains the site of the 12th-century chapel of St Catherine. The whole area is now a nature reserve, with glorious wildlife and views back to the city.

‘Since I have been at Winchester I have been improving in health – it is not so confined – and there is on one side of the city a dry chalky down where the air is worth sixpence a pint.’ We feel the same!!

From here we head back along the Itchen Way (an old railway line) to the cathedral. 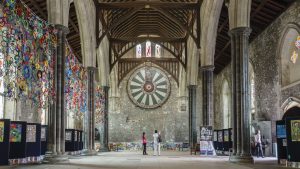 Next, we head to the west side of the town and visit the Great Hall of the former Norman castle. Above the remains of the royal dais, hangs a representation of the Round Table of King Arthur’s Knights, constructed in the 13th century, and repainted in its present form for Henry VIII; around the edge of the table were painted the names of King Arthur’s knights.

Sir Walter Raleigh was tried here and condemned to death in 1603. ‘Let us dispatch’, he said to his executioner. ‘At this hour my ague comes upon me. I would not have my enemies think I quaked from fear.’

Thomas Hardy describes the centre of the city early one summer morning in the final chapter of ‘Tess of the D’Urbervilles’: ‘The city of Wintoncester, that fine old city, aforetime capital of Wessex, lay amidst its convex and concave downlands in all the brightness and warmth of a July morning. The gabled brick, tile, and freestone houses had almost dried off for the season their integument of lichen, the streams in the meadows were low, and in the sloping High Street, from the West Gate­way to the mediaeval cross, and from the mediaeval cross to the bridge, that leisurely dusting and sweeping was in progress which usually ushers in an old-fashioned market-day.

If time allows, we suggest a quick walk through Westgate up West Hill/Romsey Rd, or you could catch a bus from The Railway station to Sleepers Hill (Bus No. 5) and walk back. 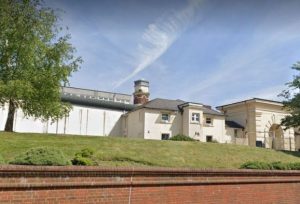 We are walking the exact route that Angel Clare and Tess’s sister Liza-Lu take to witness Tess’s hanging at Winchester Prison, which is still there with its Victorian tower, ‘an ugly flat-topped octagonal tower ascended against the east horizon’. Hardy describes the route: ‘From the western gate aforesaid the highway, as every Wintoncestrian knows, ascends a long and regular incline of the exact length of a measured mile.’

Angel and Liza-Lu stop at a ‘milestone’ and the probable site for this is at the top end of Romsey Road, just opposite the junction with Sleepers Hill, a few metres down from the bus stop. The milestone has the inscription ‘1 WESTGATE WINTON 10M CORN EXCHANGE ROMSEY’:

‘When they had nearly reached the top of the great West Hill the clocks in the town struck eight. Each gave a start at the notes, and, walking onward yet a few steps, they reached the first milestone, standing whitely on the green margin of the grass, and backed by the down, which here was open to the road. They entered upon the turf, and, impelled by a force that seemed to overrule their will, suddenly stood still, turned, and, waited in paralyzed suspense beside the stone.

They look back towards the prison they have just passed and witness the hanging of Tess: ‘Upon the cornice of the tower a tall staff was fixed. Their eyes were riveted on it. A few minutes after the hour had struck something moved slowly up the staff, and extended itself upon the breeze. It was a black flag. ‘Justice’ was done, and the President of the Immortals, in Æschylean phrase, had ended his sport with Tess.’

Trees preclude us from seeing the prison today, or even the view across the valley, so we repair to the cemetery in St James’ Lane to enjoy the superb view so well described by Hardy:

‘The prospect from this summit was almost unlimited. In the valley beneath lay the city they had just left, its more prominent buildings showing as in an isometric drawing – among them the broad cathedral tower, with its Norman windows and immense length of aisle and nave, the spires of St. Thomas’s, the pinnacled tower of the College, and, more to the right, the tower and gables of the ancient hospice, where to this day the pilgrim may receive his dole of bread and ale. Behind the city swept the rotund upland of St. Catherine’s Hill; further off, landscape beyond landscape, till the horizon was lost in the radiance of the sun hanging above it.’

Angel is surveying exactly the route taken by Keats as he gained his inspiration for ‘Ode to Autumn’, a very fitting way to end our walk. 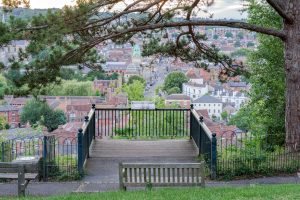