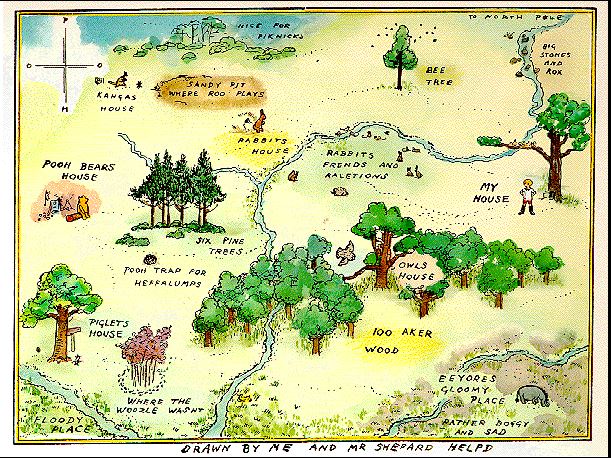 In 1925, AA Milne, a Londoner, bought a country retreat, Cotchford Farm just on the northern edge of Ashdown Forest. The Winnie-the-Pooh stories are set in the fictional Hundred Aker Wood, based upon Gill’s Lap and the Five Hundred Acre Wood just a couple of miles south of their home here.

AA Milne used to walk up from the house to Gills Lap with his son Christopher Milne (the Christopher Robin of the stories) trotting beside him as he strode across the heath in his thick socks and heavy walking shoes. As Christopher Milne said: ‘Pooh’s Forest and Ashdown Forest are identical.’

AA Milne had a lifelong love of wandering across open landscapes. Walking is intrinsic to all the Winnie-the-Pooh stories, or perhaps we should say ‘Expotitions’ (Expeditions). The stories take readers on journeys, and many of us feel we know the Hundred Acre Wood as if it were our own back garden. Of course we have a famous map to guide us too. It is all about freedom in nature, such an important part of growing up.

‘Don’t underestimate the value of doing nothing, of just going along, listening to all the things you can’t hear, and not bothering’. 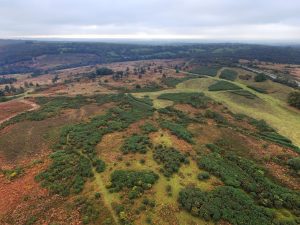 The woodland on the far side of the valley is marked as Five Hundred Acre Wood on the Ordnance Survey map but Pooh knew better: to him it was the Hundred Acer Wood. It is mentioned in the story in which Eeyore loses a tail and Pooh finds one, when Pooh went to visit Owl, whose house was in the wood for advice on the sore subject of Eeyore’s lost tail.

Christopher Milne wrote: ‘At the bottom of this valley runs a little stream. It is only a very little stream, narrow enough to jump across, shallow enough to paddle across, but it twists and rumbles in between stony banks. It was here that the North Pole was discovered.’

Eeyore’s Gloomy Place (‘rather boggy and sad’) is somewhere in the valley above on the right (south).

Eeyore has a stick house here called The House at Pooh Corner. Pooh and Piglet built it for him after accidentally mistaking the original house that Eeyore built for a pile of sticks. On Eeyore’s birthday, he is given an empty honey jar from Pooh for keeping things in, a popped red balloon from Piglet to keep in the pot, and a note from Owl. His favourite food is thistles, of which there seem to be an awful lot.

Poohsticks Bridge looks exactly like Shepard’s representation of it, which is not surprising really as it was re-built only a few years back in that exact style. So it is easy to imagine the scene from the book: 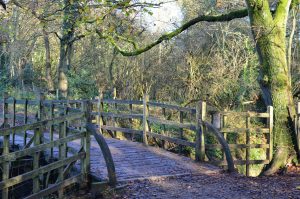 ‘Christopher Robin could just about get his chin on to the top rail of the wooden bridge, almost as broad as a road. Pooh could get his chin on the bottom rail, but it was more fun to lie down and watch the river slipping slowly away beneath him.’

This is the very spot where Pooh Sticks was invented by Winnie-the-Pooh. What started with a lovable bear accidentally kicking a fir cone into a river soon became an adventure – however with Pooh and friends using sticks rather than fir cones because they were ‘easier to mark’.  Eeyore also insisted that sticks travelled faster than cones…. as long as you let your stick drop ‘in a twitchy sort of way’! And the rest, as they say, is history.

Cotchford Farm (private) is less than a kilometre further along the track. Christopher Milne and his father would often take this route on their way up onto Gill’s Lap.

From here we take the very route father and son would have taken back up onto Gill’s Lap. 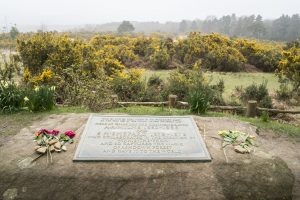 Intrinsic to the Winnie-the-Pooh books are of course EH Shepard’s illustrations, which so brilliantly evoke this landscape. When they first started to work together, Milne and Shepard walked up to this very spot to see first-hand where the stories were set, to see ‘the whole world spread out until it reached the sky’. Compare Shepard’s drawings to what you see around you today and you will be amazed by how similar the landscape still looks nearly a century later.

This memorial, unveiled by Christopher Milne in 1979, celebrates the collaboration between writer and artist.

Next up, hopefully not too unexpectedly, is the Heffalump Trap, a small hollow in which a Lone Pine grows (in the story there were six pine trees, five seem to have been lost in storms or figments of the imagination). 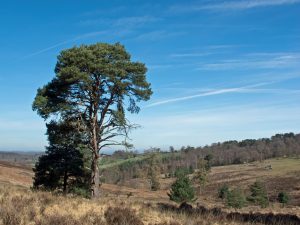 ‘Pooh’s first idea was that they should dig a Very Deep Pit, and that the Heffalump would come along and fall into the Pit . . . Pooh rubbed his nose with his paw, and said that the Heffalump might be walking along, humming a little song, and looking up at the sky, wondering if it would rain, and so he wouldn’t see the Very Deep Pit until he was halfway down, when it would be too late.’

Soon, we find ourselves in the Enchanted Place of the Pooh stories:

‘They walked on, thinking of This and That, and by-and-by they came to an enchanted place on the very top of the Forest called Galleon’s Lap, which is sixty-something trees in a circle; and Christopher Robin knew that it was enchanted because nobody had ever been able to count whether it was sixty-three or sixty-four, not even when he tied a piece of string round each tree after he had counted it.

Being enchanted, its floor was not like the floor the Forest, gorse and bracken and heather, but close-set grass, quiet and smooth and green. It was the only place in the Forest where you could sit down carelessly, without getting up again almost at once and looking for somewhere else. Sitting there they could see the whole world spread out until it reached the sky, and whatever there was all the world over was with them in Galleons Lap.’ 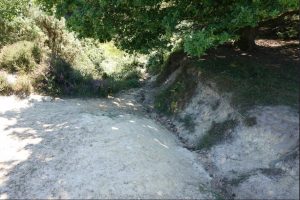 Finally, we come to Roo’s Sandy Pit, an old quarry, where Roo learned how to do hops and also where he was kidnapped in order to try and force Kanga and Roo, newcomers to the Forest, to leave it forever. Naturally, everyone ended up friends, but not before Piglet had been forced to have a bath and he had ‘never really been fond of taking those’.

And there we are, back where we started. Or as Winnie the Pooh might have put it, ‘I always get to where I’m going by walking away from where I’ve been.’