‘Nowhere has drawn me back more often’

‘It has become a sort of Tintern Abbey for the contemporary’

‘A metonym for a state we are now in, a clash and crisis and juxtaposition’

It was Robert Macfarlane’s ‘Mountains of the Mind’ that first grabbed my imagination, but there are many other great works that he has since added to what is becoming a major body of work. A modest but thought-provoking addition is ‘Ness’, a book about this mysterious spit of land just off the coast, where man has briefly interrupted nature.

Robert MacFarlane has become head of the British nature writers guild by acclaim, barely any self-respecting book connected to nature does not have his support on the front cover or better still a preface to the work.

My claim to fame is that one of my books, Pathways, is referenced in the index to his great book about walking ‘The Old Ways’. 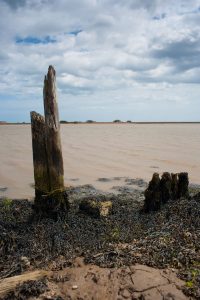 Robert Macfarlane writes: ‘Lying just off the Suffolk coast is a desert. Orford Ness is a vast shingle spit, some 12 miles long and up to a mile wide, which curls offshore round from Aldeburgh down to Hollesley. For most of the 20th century, the Ness was owned by the Ministry of Defence, for whom its natural security and secrecy made it the ideal military test site. Bomb ballistics, gun gears, phosphorous shells, nuclear detonators: for 80 years, the physics of death was tested and perfected out there on the shining expanses of flint.

‘The Trust pursues the finely named policy of “controlled ruination”, which sounds like a South African rugby strategy, but in conservation terms means allowing entropy its play. Here, there is little of the painstaking repair work that goes on at most Trust-owned properties. When glass shatters or tarmac cracks, it is left unfixed. Rust spreads in maps. Buildings dilapidate. The splintered, the fissile, the ruderal: these are the Ness’s textures.

‘The Ness is also a wild place. It is front-line North sea: big storms chew hard at it in winter. Its mixture of mudflat, salt marsh, grassland and shingle is hunted over by marsh harriers and peregrines. Avocets, curlews and whimbrels probe its rich mud. Lesser black-backed gulls breed on and around the pagodas. An eerie and intricate landscape, then, in which the military and the natural combine, collide and confuse. Brambles coil and loop like barbed wire. Orange lichen camouflages the concrete of pill-boxes.’

‘The Ness, like other east coast spits (Spurn Head, Blakeney Point, Dungeness), is a dynamic structure. Created and shaped by tide, current, shore-drift and weather, it is in continual slow migration, forming and reforming over time. Spurn Head, when mapped across centuries, appears to lash like a tail. The distal point of Orford Ness can extend and retract by miles within decades. Storms throw up new ridges and swales of shingle along its outer edge, fattening the spit.

‘Arnie and I agreed early on that we wanted the Ness’s volatility as a landscape to be a formal principle of our work. Arnie’s expertise as a double bassist was well suited to this, and it became clear that the eventual performance would include major elements of jazz improvisation.

‘I have long been fascinated by the many languages of the Ness: the specialist dialects (military-technological, ornithological, geological, conservationist) that it has generated; the many voices (human, avian, mineral) with which it seems to speak. It is a profoundly polyglot place. Also fascinating to me is the discourse migration that has occurred between those voices: the mist that rolls in off the North sea; the mist-nets that the ornithologists use to trap and ring migrant birds; the Cobra Mist listening station, designed to eavesdrop on the Soviet Union.

In 2018 Macfarlane published ‘Ness’, a short book that, in the words of the Guardian, ‘seems to blend the symbolic oddity of medieval mystery plays with the lyrical strangeness of Anglo-Saxon poetry’; and is interspersed with Stanley Donwood’s haunting line-drawings.

The story, such as it is, revolves around five characters – ‘it, he, she, they, as’ – who approach and overrun the Ness:

‘All five know where they must go &

With what they must grapple &

Where they must go is to the Green Chapel’

These five are natural forces that can overwhelm a place: the drift of tides and currents that can shift the spit in a storm; or fungi that, ‘If you left her on a rock, given time, she would crack it with her acids.’ 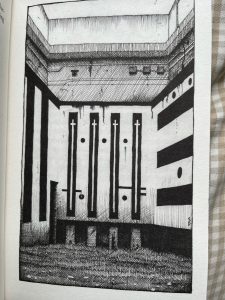 Inside the Green Chapel – one of the cathedral-like concrete pagodas – stands a group of scientists that includes an Engineer, an Ornithologist, a Botanist, a Physicist, and a Bryologist, who are led by an Armourer in reciting ‘The Firing Song’ that will begin a nuclear weapons test.

These two groups are set in opposition in a dramatised version of the long-running battle between humans and nature. And, as with Orford Ness itself, the hubristic pursuits of mankind are overwhelmed by the unrelenting timeless forces of nature.

The style is unfamiliar and hard to assimilate, it reminds me in tone of ‘Crow’ by Ted Hughes and in mood of Tacita Dean’s ‘Teignmouth Electron’, an eerie 20-minute video in memory of Donald Crowhurst’s ill-fated attempt to sail around the world in the Golden Globe Race of 1968.

OTHER WRITERS INSPIRED BY THE NESS

Over the decades, musicians, filmmakers, artists and writers have been sucked into its ghostly orbit, captivated by what the great existential wanderer WG Sebald imagined as ‘the remains of our own civilisation after its extinction in some future catastrophe’. He wrote of his visit there in The Rings of Saturn (1995): ‘Where and in what time I truly was that day at Orford Ness I cannot say, even now as I write these words.’

If you look online, you will find all sorts of artistic references to the place, including Cobra Mist, an evocative film by Emily Richardson that takes an unsettling tour of the site to a soundtrack by Chris Watson.

Months before its demolition in 2020, the lighthouse was memorialised in a film and music project by the singer-songwriter Thomas Dolby, as the symbolic centre of a docu-tour of the area he grew up in. Orford Ness ‘has seeped into my chord changes and lyrics’ he says in ‘The Invisible Lighthouse’, which begins with a beam of light sweeping round as handwritten words appear on the screen.