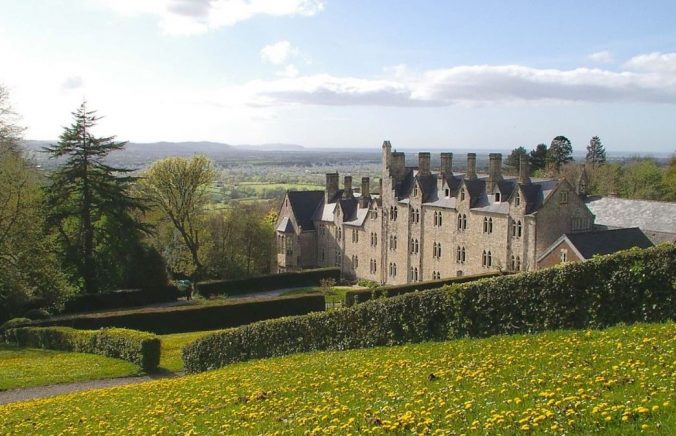 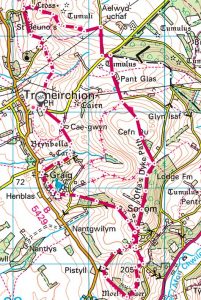 In 1874 Gerard Manley Hopkins came to The Vale of Clwyd in North Wales to spend three years studying theology at St Bueno’s College in preparation for the Jesuit priesthood.

Hopkins relished his time here, and the Welsh language had a profound effect upon his work; he explored Welsh poetic form and delighted particularly in ‘cynghanedd’, a sound-arrangement that relies on repeated sounds and stresses, a characteristic that he started to use much in his own poetry. He wrote some of his finest poetry here, including ‘The Wreck of the Deutschland’, and his ‘bright sonnets’, the ‘Pied Beauty’, ‘God’s Grandeur’ and ‘The Windhover’.

Hopkins was enraptured by nature; his poetry frequently conveys a sense of wonder at the natural world, at its sheer variety – indeed, he coined the word ‘inscape’ to describe the way he viewed the individual uniqueness of every physical thing as evidence of God. The opening stanza of ‘Pied Beauty’ is one of his most beautiful expositions of this:

‘Glory be to God for dappled things –
For skies of couple-colour as a brinded cow;
For rose-moles all in stipple upon trout that swim;
Fresh-firecoal chestnut-falls; finches’ wings;
Landscape plotted and pieced – fold, fallow, and plough;
And áll trádes, their gear and tackle and trim.’

These were happy times for a poet often associated with darker thoughts. In a letter to a friend he referred to his time in Wales as ‘my Welsh days…my salad days’.  ‘Wild Wales breathes poetry’. He enjoyed nothing more in his free time than exploring the surrounding countryside on foot.

Our walk starts in the tiny village of Tremeirchion. Take a drink in the village pub, the Salusbury Arms, it has been brought back to life thanks to a big community effort. Dr Johnson visited in 1774 and found the church to be in ‘a dismal condition’. Today it is well-maintained, and notable for the ancient yew trees in the churchyard, dating back more than 800 years.

Soon we cross a lively stream. Just downstream from here are the Ffynnon Beuno and Cae Gwyn Caves, the last occupied European site of Northern European Neanderthals. And below that is St Bueno’s Well. Both are on private land but can be visited with the permission of St Bueno’s Huts.

As we climb from here, so we get a splendid view west across the Vale of Clwyd. In the distance sparkle the Rivers Clwyd and Elwy. Hopkins wrote in his diary: ‘The valley looked more charming and touching than ever: in its way there can hardly be in the world anything to beat the Vale of Clwyd’. We agree, rugged and tamed at the same time, those points everywhere where man’s endeavours reach the edge and mountain or moor begins.

The Vale was the inspiration for one of Hopkins’ greatest sonnets, ‘Hurrahing in Harvest’: ‘The Hurrahing sonnet was the outcome of half an hour of extreme enthusiasm as I walked home alone one day from fishing in the Elwy’, he recalls.

Around; up above, what wind-walks! what lovely behaviour

Meal-drift moulded ever and melted across skies?

Down all that glory in the heavens to glean our Saviour;

And, éyes, heárt, what looks, what lips yet gave you a

These things, these things were here and but the beholder

Wanting; which two when they once meet,

And hurls for him, O half hurls earth for him off under his feet.’

‘I walk, I lift up, I lift up heart, eyes’ – the positive emotional and physical benefits that walking can engender in all of us! 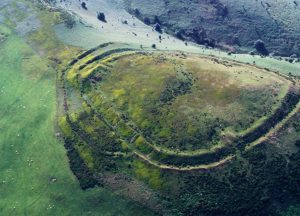 We scramble to the top of Moel y Gaer, an Iron age fort, one of a chain of six hill forts in the Clwydian Range. The views from the top are spectacular. As we start heading back, so we pick up the Offa’s Dyke Path, an earthwork that roughly follows the current border between England and Wales, built by King Offa in the eighth century.

We tramp across Cefn Du, a rather unprepossessing hill. Hopkins describes it thus: ‘A furze-grown and healthy hill, from which I could look round the whole country, up the valley towards Ruthin and down to the sea. The cleave in which Bodfari and Caerwys lie was close below.’

Our path then passes just above St Bueno’s College, a striking nineteenth century Victorian Gothic building. Hopkins wrote to his father about it: ‘The house stands on a steep hillside. It commands the long drawn valley of the Clwyd to the sea, a vast prospect, and opposite is Snowdon and its range; just now it being bright visible, but coming and going with the weather. The air seems to me very fresh and wholesome.’ 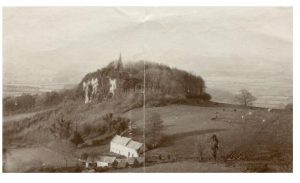 ‘Rock Chapel’, sits on a wooded hill to the south of St Beuno’s, constructed just a few years before Hopkins would have visited the site. As he writes in his diary soon after his arrival: ‘For the first time to the Rock. The Rock is a great resort of hawks and owls.’ We spy a sheer cliff edge, we are exposed to the prevailing winds (‘big wind’) and we see a tractor ploughing in the field below (‘shéer plód makes plough down sillion’). Could this be, surely it is, the spot that inspired ‘The Windhover’?!

To Christ Our Lord

dom of daylight’s dauphin, dapple-dawn-drawn Falcon, in his riding

Of the rolling level underneath him steady air, and striding

High there, how he rung upon the rein of a wimpling wing

In his ecstasy! then off, off forth on swing,

As a skate’s heel sweeps smooth on a bow-bend: the hurl and gliding

Rebuffed the big wind. My heart in hiding

Stirred for a bird, – the achieve of, the mastery of the thing.

Buckle! AND the fire that breaks from thee then, a billion

Fall, gall themselves, and gash gold-vermilion.’

He regarded this poem as ‘the best thing I ever wrote’. What a way to finish our walk. This walk has made us realise just how much Hopkins’ finest sonnets are imbued with the landscape and nature of this beautiful part of North Wales.