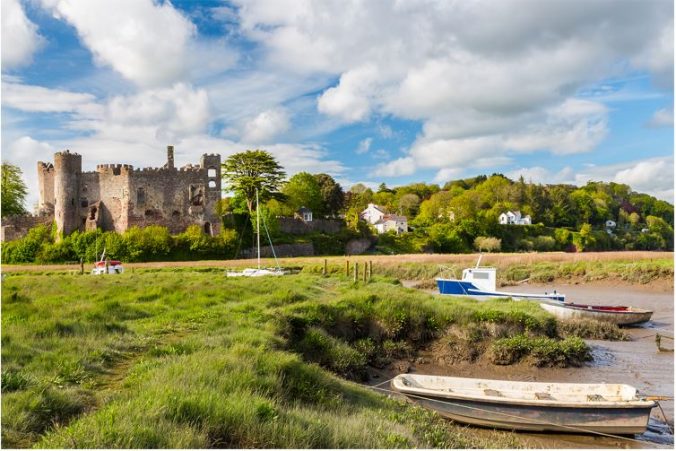 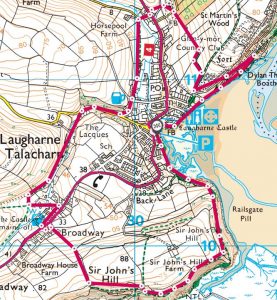 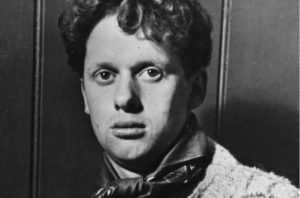 We tend to think of Dylan Thomas as a prodigious drinker, a bohemian and bon vivant. But he was also, as he wrote in Portrait of the Artist as a Young Dog, ‘a lonely night-walker and a steady stander-at-corners. I liked to walk around the wet town after midnight, when the streets were deserted and the window lights out, alone and alive’. In that sense at least he had a touch of the Charles Dickens about him.

He also shared with that great writer a power to evince a sense of place, and none more so than the place he called ‘a beguiling island of a town’, the tiny fishing town of Laugharne (pronounced ‘Larne’). What better way of introducing it than in his own words, from his essay ‘Quite Early One Morning’:

‘Off and on, up and down, high and dry, man and boy, I’ve been living now for fifteen years, or centuries, in this timeless, beautiful, barmy (both spellings) town, in this far, forgetful, important place of herons, cormorants (known here as billy duckers), castle, churchyard, gulls, ghosts, geese, feuds, scares, scandals, cherry trees, mysteries, jackdaws in the chimneys, bats in the belfry, skeletons in the cupboards, pubs, mud, cockles, flatfish, curlews, rain, and human, often all too human, beings’.

‘Now, some people live in Laugharne because they were born in Laugharne and saw no good reason to move… and some, like myself, just came, one day, for the day, and never left; got off the bus, and forgot to get on again. Whatever the reason, if any, for our being here, in this timeless, mild, beguiling island of a town with its seven public houses, one chapel in action, one church, one factory, two billiard tables, one St. Bernard (without brandy), one policeman, three rivers, a visiting sea, one Rolls-Royce selling fish and chips, one cannon (cast-iron), one chancellor (flesh and blood), one portreeve, one Danny Raye, and a multitude of mixed birds, here we just are, and there is nowhere like it anywhere at all.’

Laugharne has a huge significance in Thomas’ life and work. The town of Llareggub (‘bugger all’ spelt backwards) in his radio play Under Milk Wood was based on Laugharne. As his granddaughter wrote: ‘Despite, or because of, its quirks, Laugharne was a place where my grandfather managed to concentrate on his writing, as it was here that he wrote iconic poems such as, Do Not Go Gentle Into That Good Night and Over Sir John’s Hill.’ 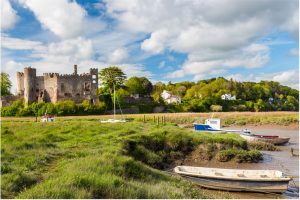 We begin our walk at the 12th-century Laugharne Castle and spot the cast-iron cannon Thomas was referring to in his essay. Looking towards the sombre walls we are reminded of his description of it as ‘brown as owls’. Looking the other way over the bay, we are struck by the beauty of the view and the sense of being on an island more than a promontory.

We walk up the narrow lane to The Boathouse; apparently, it used to be ‘gin lane’ where contraband was regularly smuggled and deposited by the Boathouse wall. 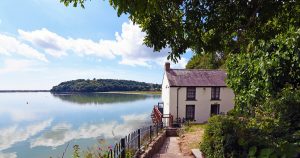 When he first saw it, he said: ‘this is it; the place, the house, the workroom, the time…I shall write in this water and tree room on the cliff.’

Picture your ideal of a writer’s shed (perhaps you have one at the bottom of your garden?!) and I doubt that you could conjure up anything more evocative than this one. The perfect location, perched on a cliff overlooking the Taf estuary, and close to several pubs, important for many writers and vital for this one. A box perched on stilts above the ‘visiting sea’. A small fireplace, crumpled papers on and around the desk and a jacket thrown over a chair.

On a breakneck of rocks

Tangled with chirrup and fruit’ (Prologue) 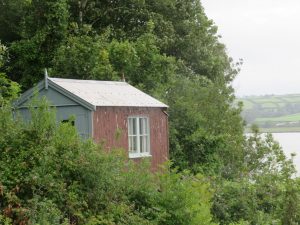 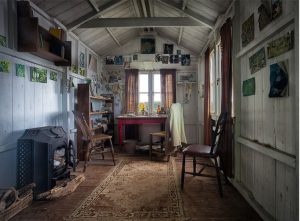 Here, in his ‘wordsplashed hut’, he composed several of his finest poems. Apparently, it used to be a garage and housed the town’s first automobile.

Thomas lived in the nearby Boathouse with his wife Caitlin and three children from 1949 to his death in 1953. The house is secret and snuggled into the cliff face and feels the perfect spot for getting away from it all. 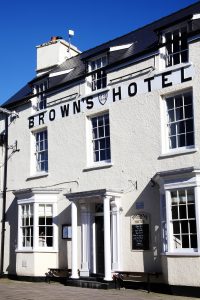 Thomas befriended Ivy Thomas, the landlady of the Browns Hotel, and she supplied him with stories and gossip, source material for ‘Under Milk Wood’. He drank there most nights when in Laugharne, even giving the hotel phone number as his own. In a letter to a friend planning a visit, he wrote, ‘Drop in at Brown’s Hotel & buy a Felinfoel and ask where we live: they know.’ The wakes for both him and Caitlin were held in Browns after their funerals in 1953 and 1994 respectively.

Across the road is a tall Georgian terraced house, ‘The Pelican’, where Dylan’s parents had come to live in 1949. Dylan would call on his father every day to do the crossword and chat. In 1951, as his father became sick and his sight began to fail, Dylan was moved to write what has become his most famous poem, ‘Do not go gentle into that good night’:

‘And you my father, there on the sad height

Curse, bless, me know with your fierce tears I pray.

Do not gentle into that good night,

Rage, rage against the dying of the light.’ 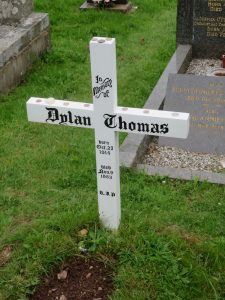 Dylan and Caitlin are both buried in the graveyard here. The grave, marked with a simple white cross, is over the small bridge in the middle of the new graveyard. The view from the cemetery is impressive.

In the cold-stone interior of the church itself, a plaque to Thomas bears the inscription from one of his most evocative poems, ‘Fern Hill’. It reads: ‘Time held me green and dying/Though I sang in my chains like the sea.’

We finish off with a short excursion onto the lovely Sir John’s Hill, which Thomas would have viewed every day from his writing shed.

To reach it, we first cross ‘The Lawn’, a favourite picnicking and beach place of the Dylans. They would change to put their swimming suits on in a building that looked like a tiny, ruined chapel. Apparently, the lawn had been built as a tennis court in the 1900s.

Some say that the woodland here inspired the title Under Milk Wood. Certainly, a walk along the shoulder of this hill inspired Thomas to write his ‘Poem in October’ about his love of Laugharne and getting older. 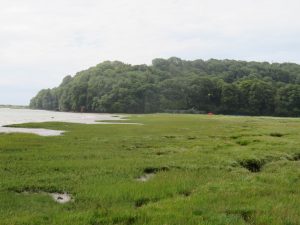 ‘Pale rain over the dwindling harbour

And over the sea wet church the size of a snail

With its horns through mist and the castle

A pretty good description of our view I must admit!

There seems no more fitting way to finish up our day than repairing to Browns Hotel and letting his words from the short story ‘Old Garbo’ wash over us as we sip our pints of Felinfoel. ‘I liked the taste of beer,’ he wrote, ‘its live, white lather, its brass-bright depths, the sudden world through the wet brown walls of the glass, the tilted rush to the lips and the slow swallowing down to the lapping belly.’