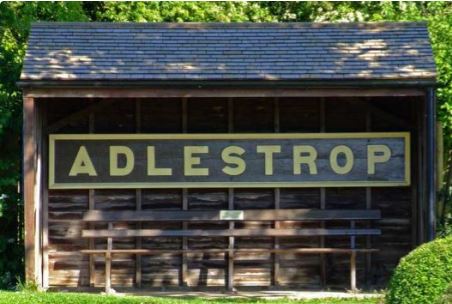 ‘No one left and no one came’

The tiny, quaint village of Adlestrop, set in the Cotswolds, is the scene of the ‘unwonted’ stop that inspired Edward Thomas’s (1878-1917) much-loved poem of the same name, capturing an uneventful ‘moment in time’ and making it memorable forever. 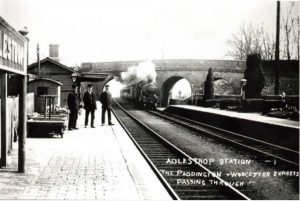 Sadly the old station no longer exists, lost in 1966 to the Beeching cuts and dismantled. The good news though is that one of the station’s signs was saved and erected in the village’s bus shelter. This is the place to repair to then to recite the poem (the chance of your recitation being drowned out by an actual bus being rather low).

Over a century ago, a steam train carrying an unknown poet made an unscheduled stop at the station. Absolutely nothing else happened. Edward Thomas, then aged 36 and bereft of inspiration, dutifully jotted the details of this fleeting non-event into his notebook, and from them fashioned a poem that has become one of the nation’s favourites.

He was on his way from London to Robert Frost’s home near Ledbury in June 1914. In his notebook, he scribbled ‘…thro the willows cd be heard a chain of blackbird songs at 12.45, and one thrush and no man seen, only a hiss of engine letting off steam.’ The poem that resulted was a golden key, miraculously unlocking all the creative energies that Thomas had unconsciously suppressed, and a stream of poems subsequently poured out of him.

The name, because one afternoon

Of heat the express-train drew up there

Unwontedly. It was late June.

The steam hissed. Someone cleared his throat.

No one left and no one came

On the bare platform. What I saw

Was Adlestrop – only the name

And willows, willow-herb, and grass,

And meadowsweet, and haycocks dry,

Than the high cloudlets in the sky.

And for that minute a blackbird sang

Close by, and round him, mistier,

Farther and farther, all the birds

Of Oxfordshire and Gloucestershire.

We must be frank, this doesn’t merit a visit in its own right, but if you are passing this way it makes a welcome mental diversion.

Any other literary links nearby? 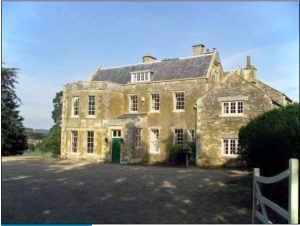 Rather incredibly, another famous writer has in fact been this way: Jane Austen stayed at Adlestrop House on three occasions, visiting her mother’s cousin.

The ‘Dymock Poets’ were a literary group who made their homes near the village of Dymock in Gloucestershire in the 1910s. They comprised Robert Frost, Lascelles Abercrombie, Rupert Brooke, Edward Thomas, Wilfrid Wilson Gibson, and John Drinkwater. The group published their own quarterly, entitled ‘New Numbers’, containing poems such as Brooke’s ‘The Soldier’. There is a permanent exhibition about them in St Mary’s Church, Dymock (GL18 2AT). There are two waymarked footpaths, which begin from the church, called Poets Path I and Poets Path II. Find a pdf at https://www.dymockpoets.org.uk/Paths.htm

Edward Thomas and Robert Frost became close friends and took many walks together around here. Frost called these their ‘talks–walking’: and in them, their conversations ranged over marriage and friendship, wildlife, poetry and the war.

So close was the friendship that had developed between them that Thomas and Frost planned to live side by side in America, writing, teaching and farming. But Thomas was a man plagued by indecision and could not readily choose between a life with Frost and the pull of the fighting in France. Frost returned to New Hampshire in 1915, sending Thomas an advance copy of ‘The Road Not Taken’ from there. Thomas took the poem seriously and personally, and it may have been significant in his decision to enlist in World War I, in which he was killed.