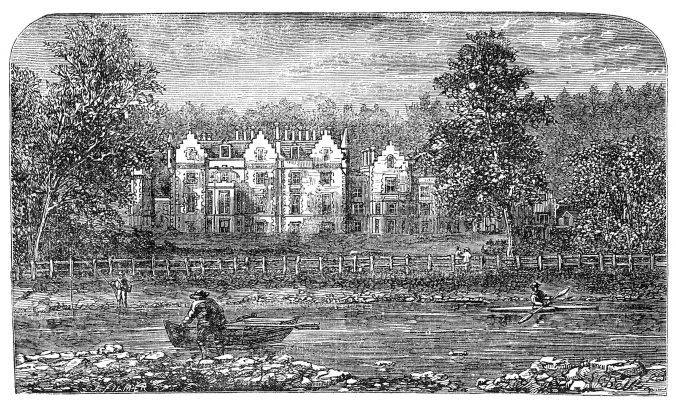 ‘It is a kind of conundrum castle to be sure, which pleases a fantastic person in style and manner’ 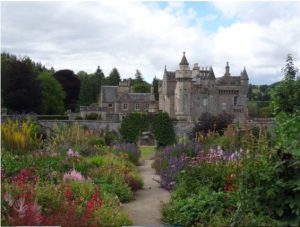 Sir Walter Scott was a Scottish historical novelist, poet, playwright, and historian, incredibly popular in his day (Rob Roy and Ivanhoe were required reading) but now much less read. He is perhaps best known today for the re-creation of Scottish tradition in the shape of, amongst other things, the Scottish tartan and Scottish banknote.

Scott first became fascinated by history and the Melrose region when he was a boy. His father would stop the carriage by the side of a wood on the way from Selkirk to Melrose and take his son to see The Turn Again Stone, believed to have been set up around 1526 at the time of the Battle of Melrose on nearby Skirmish Hill. Their namesakes, who were fighting for the release of James V, were defeated by forces led by Ker of Cessford. Ker led the following pursuit but, at the site of the stone, Elliot turned and speared Ker to death. The stone marks this spot.

He realised his childhood dream when he bought a farmhouse nearby in 1811 and had soon demolished and built a much bigger house which he re-named Abbotsford, after a neighbouring ford used by the monks of Melrose Abbey. In the next decade he created the sort of romantic, Scottish baronial fantasy that was the architectural equivalent of his many novels.

Scott loved Abbotsford and delighted in building it; his journal and letters are full of allusions to its progress and to his happiness in finding more and more treasures to add to his collection. He described it variously as ‘the Delilah of his imagination’, his ‘Conundrum Castle’ and ‘flibbertigibbet of a house’ that would ‘suit none but an antiquary’. Its architecture and interior design made it an iconic building of the 19th century Scottish Baronial style, and it remains a key site in the history of European Romanticism.

Above all he loved the view of the Tweed and he wrote: ‘The view to the Tweed from all the principal apartments is beautiful. You look out from among bowers over a lawn of sweet turf upon the clearest of all streams fringed with the wildest of birch woods and backed with the green hills of Ettrick Forest.’

Visitors started coming to Abbotsford the year after Sir Walter’s death in 1832 and the first visitors’ book was begun in that year.

AN Wilson wrote: ‘One could say that Abbotsford was an extension of Scott’s literary oeuvre – an architectural Waverley novel, or a poem in stone of Border life and history…nowhere do we feel that a writer’s whole artistic vision has been so consciously immortalised in architecture and furnishings.’ 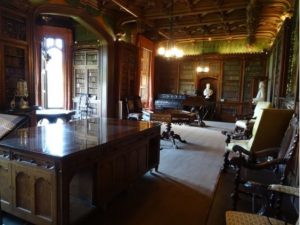 The house is stuffed full of antiquaries, books, heraldry, armour, antlers and curios, including a lock ofBonnie Prince Charlie’s hair.

We especially enjoyed looking at Sir Walter’s study, peering at his desk, chair, and various personal pieces as if he had just left the room. Many of his novels were written here.

Another of our favourite rooms was the library, very opulent with its Jamaican cedar and painted ceiling. All the books are still shelved in exactly the order that Sir Walter Scott placed them in.

The garden is compact, fragrant, colourful and detailed. It is contained within high walls, with the facades of the house setting a scene that could be straight out of one of Scott’s historical romances. We look up to Scott’s ‘Juliette’ balcony sited at his bedroom window, see across to a ‘Rapunzel’ tower that overlooks the river, and explore the gothic staircase leading to the meadow beyond. We even find Scott’s greenhouse based on a medieval jousting tent.

Sir Walter’s Scott’s lifelong love was tree-planting and many of the mature trees we see on the estate today were planted by him.

Paths criss-cross the estate and we spend ages wandering around enjoying the trees, the Romantic designed landscape and the splendid views across the Tweed.

Explore: Paths Around Abbotsford at file:///C:/Users/Nicholas/Downloads/Abbotsford.pdf for some longer walks in the area. 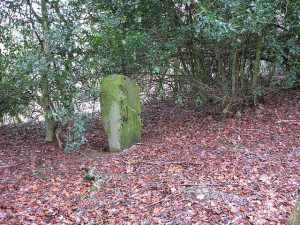 See: The Turn Again Stone, located just north of Kaeside Farm, in the woodland near the grain silo. Please ask permission at the farm before walking to the stone. (Exact spot: NT 5166 3407). Also part of Route 5 of Paths around Abbotsford.