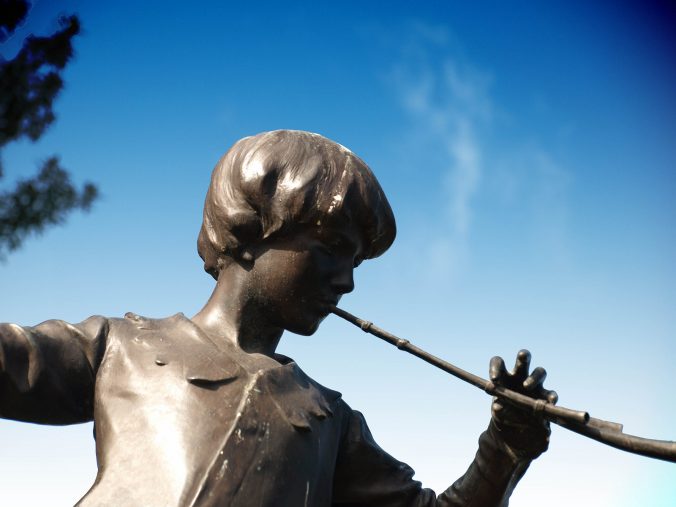 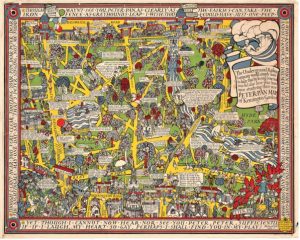 ‘Well, Peter Pan got out by the window, which had no bars. Standing on the ledge he could see trees far away, which were doubtless the Kensington Gardens, and the moment he saw them he entirely forgot that he was now a little boy in a nightgown, and away he flew, right over the houses to the Gardens.’ 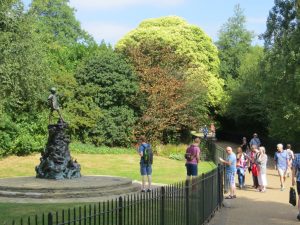 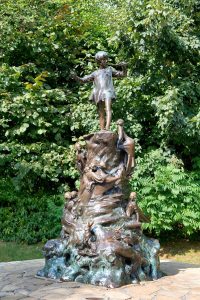 The Peter Pan Statue was erected in Kensington Gardens in 1912, featuring squirrels, rabbits, mice and fairies climbing up to Peter, who is stood at the top of the bronze statue. The author, JM Barrie, lived nearby and published his first Peter Pan story in 1902, using Kensington Gardens for inspiration. In his Peter Pan tale, The Little White Bird, Peter flies out of his nursery and lands beside the Long Water. The statue is located at this exact spot. It is the work of Sir George Frampton, who also created the lions outside the British Museum. 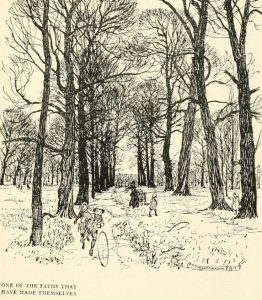 JM Barrie wrote about the spot: ‘Paths from everywhere crowd like children to the pond. Some of them are ordinary paths, which have a rail on each side, and are made by men with their coats off, but others are vagrants, wide at one spot, and at another so narrow that you can stand astride them. They are called Paths that have Made Themselves, and David did wish he could see them doing it. But, like all the most wonderful things that happen in the Gardens, it is done, we concluded, at night after the gates are closed. We have also decided that the paths make themselves because it is their only chance of getting to the Round Pond.’ Nowadays we usually call these types of paths Desire paths, or ‘free-will ways’ as Robert Macfarlane calls them.

Ladbroke Grove tube, just a few minutes south into the gardens. Walk through the Italian Gardens and along the west side of Long Water.

Read: The Little White Bird, by JM Barrie, Chapter XIII The Grand Tour of the Gardens

Tick-off some Blue Plaques: JM Barrie lived at 100 Bayswater Road from 1902 to 1909, where he wrote Peter Pan. TS Eliot lived on the south side of Kensington Gardens in Kensington Court from 1957 until his death in 1965.  Henry James lived in 34 De Vere Gardens between 1886 to 1898, during which time he was writing The Ambassadors. Ezra Pound lived in Hornton St from 1909 to 1914