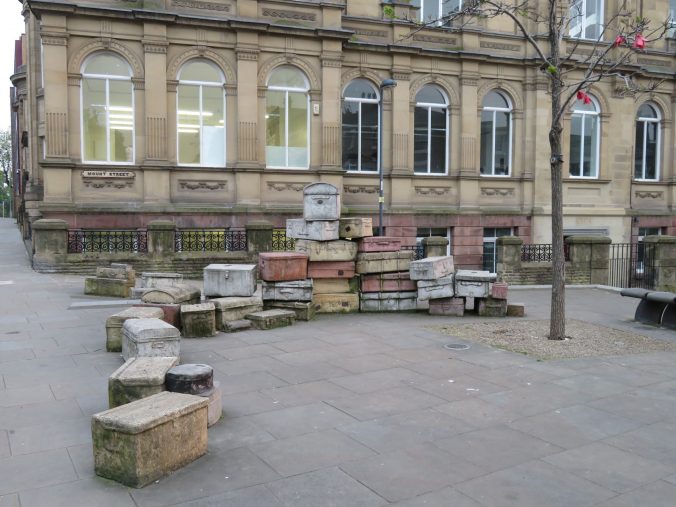 ‘Liverpool is at the present moment the centre of the consciousness of the human universe.’ Alan Ginsberg, 1965

‘A port in which all climes and countries embrace.’ Herman Melville 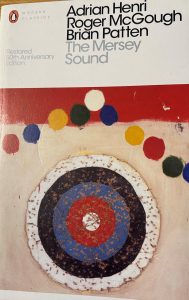 The inspiration for the walk…The Mersey Sound (1967)

I came to Liverpool late, but fell in love with the city immediately. It just felt different from anywhere else and more vibrant, not at all like the places I was used to. I have visited many times since.

And so I came incredibly late to the Mersey Sound too, and my copy dates from 2017 and is the Restored 50th-anniversary edition. I love the irreverence and energy of the verses.

By great good fortune I got my copy signed by Roger McGough himself, when he came to the Stamford Arts Centre in 2018, combining music and poems with his group Little Machine, 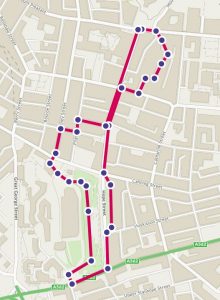 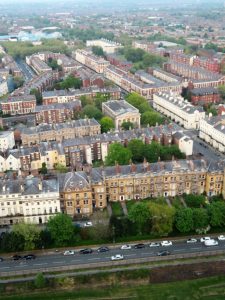 THE LIVERPOOL CULTURAL SCENE IN THE 1960S

Liverpool in the1960s became almost out of nowhere a focal point for popular culture, in which art, music and writing were closely connected. The two main strands of this became labelled the Mersey Beat (music) and the Mersey Sound (poetry), and their progenitor was the Liverpool College of Art on Hope St. Two of its members stand out most prominently: John Lennon, who was a student at the art college in the late 1950s and was first famous for his irreverent cartoons; and 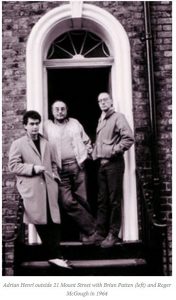 Adrian Henri, who was a lecturer there, a notable poet, artist and creative networker.

In the words of George Melly, Liverpool 8, which we walk through today, was then ‘an unpunctuated state of mind, a gently decayed bohemia of layabouts, artists and beatniks, a low-rent district of Georgian squares and terraces’ where Henri, a ‘bearded, bespectacled, pear-shaped polymath’ infused his diverse enthusiasms for Apollinaire, Andre Breton, Jarry and Magritte into the volatile culture mix. 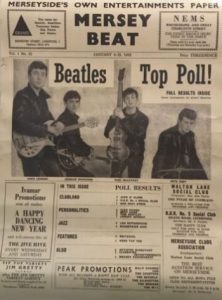 The Mersey Beat was a musical movement and a magazine.

The musical movement was ‘beat’ music, influenced by rock and roll, skiffle, and traditional pop music, and at the start of the 1960s there were about 500 different groups in the Merseyside area playing it on a regular basis.

This movement crystallised around the Mersey Beat magazine, founded in 1961 by Bill Harry, who was one of John Lennon’s classmates at Liverpool Art College. It focused on the Liverpool music scene and was instrumental in the Beatles’ success. It ran a poll in 1962 to find out who was the most popular Merseyside group. The Beatles topped the poll, and this helped launch them out on their path to stardom.

The Mersey Sound was an anthology of poems by Roger McGough, Brian Patten and Adrian Henri (a lecturer at the Liverpool College of Art) first published in 1967 when it launched the poets into ‘considerable acclaim and critical fame’. It went on to sell over 500,000 copies, becoming one of the bestselling poetry anthologies of all time. The poems are characterised by ‘accessibility, relevance and lack of pretension’. Every aspiring poet of that era would have had a well-thumbed copy beside their bed. 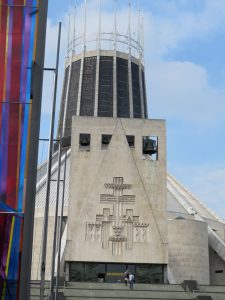 Our walks starts at the foot of the striking modern Catholic cathedral, a famous landmark of the city, which was consecrated in 1967, the very year that the Mersey Sound was first published. This was a city starting to propel itself into the modern era.

Our first stop is Cambridge Court, behind the Everyman Theatre, where there is a memorial to the birthplace of John Winston Lennon, born on 9th October 1940 in this maternity ward (now student accommodation). His father was away at war and one can only imagine the austerity and hardship that must have greeted the start of his life. How much would change in twenty years. 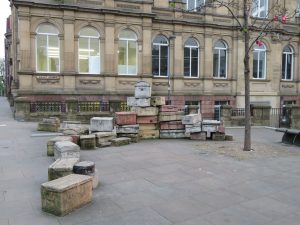 We admire ‘A Case History’, a concrete sculpture of suitcases by John King, commissioned by the Liverpool Institute for Performing Arts and completed in 1998. Bronze luggage tags carry the names of individuals and institutions associated with the area, including in the literary and musical field:

We find this suitcase sculpture is a clever way of evoking the brilliance of so many Liverpool folk and the sense of journeying which always pervades Liverpool being a seaport.

Liverpool School of Art and Design

The Liverpool College of Art, fronting onto Hope St, was the hub of avant-garde activity in the 1960s. The influential and respected Arthur Ballard was joined at the college by a younger and more rebellious group of teachers, including Adrian Henri. John Lennon and Stuart Sutcliffe (the original bassist of the Beatles) joined as students in 1957.

Paul McCartney and George Harrison, who were in the much more traditional Grammar School opposite, would hop over the wall at lunchtime into the college canteen to perform with Lennon and Sutcliffe. Their regular lunchtime jams turned The Quarrymen, as they were known at the time, into the official college band, and their subsequent first recordings were funded by the students’ union.

John Lennon lived at 3 Gambier Terrace in 1960 with former Beatles bassist Stuart Sutcliffe, after Sutcliffe asked the others who lived there if the homeless Lennon could move in.

Beryl Bainbridge (1932-2010), writer and artist, lived at22 Huskisson St at around the same time, even entertaining three of the Beatles before they were even Beatles at a party in 1959. She wrote that ‘nothing shall be as sweet as the Liverpool days’ although she later bemoaned the loss of many of the places she had held dear and the spirit of the place. 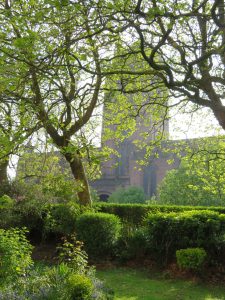 Which is usually coffee and a view

Of teeming rain and the cathedral old and grey but

Smelling good with grass and ferns

We smell the grass and ferns again as we walk back through the cemetery beneath the cathedral.

A community of artists, poets, writers and intellectuals gathered in the pubs, clubs and each other’s houses in the area surrounding the art school, and Ye Cracke was their most regular haunt.

‘I introduced my mates Stuart and Rod Murray to John, and we used to go to Ye Cracke, the art school pub in Rice Street. The four of us decided to call ourselves the Dissenters and made a vow to make Liverpool famous: John with his music, Stuart and Rod with their painting, and me with my writing. I coined the phrase “Mersey Beat”, launched a newspaper of that name and got John to write the story of the Beatles for the first issue.’

It was also a venue for The Liverpool Scene, a poetry band, which included Adrian Henri and achieved brief fame in the 1960s.

We end up back at the steps of the Catholic cathedral, astonished that such a small space could produce such an outpouring of creative talent in such a short space of time.

‘Or when I’m 104 / and banned from the Cavern / may my mistress / catching me in bed with her daughter / and fearing for her son / cut me up into little pieces and throw away every piece but one.’