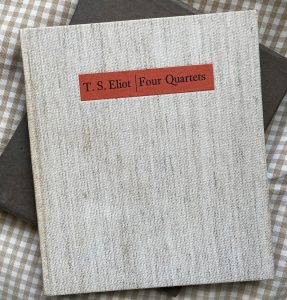 The inspiration for this trip: ‘The Four Quartets’

TS Eliot seemed the most iconic of poets when I was at school. I saved up for the Faber Complete Poems & Plays, whilst my parents splashed out on this very grand Folio Society edition. I recall we got a Folio Society book every three months or so, and we used to open the parcel very carefully and admire the quality of the material and design – such a far cry from the ultra-thin paper versions of the classics that my parents had lived off during the war, many of which remain on their bookshelves to this day. 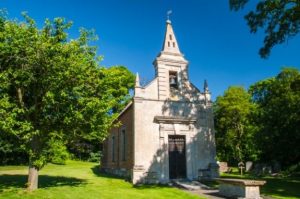 Little Gidding Church is difficult to find, but unforgettable when found. It is a secluded place in remote Cambridgeshire countryside, with very few settlements in the vicinity.

Little Gidding was the home of a small Anglican religious community established in 1626 by Nicholas Ferrar. It was founded around strict adherence to Christian worship in accordance with the Book of Common Prayer and the High Church (or Catholic) heritage of the Church of England.

King Charles I visited Little Gidding three times, including on 2 May 1646 seeking refuge after the Royalist defeat at the Battle of Naseby and was given temporary refuge by John Ferrar. The church was severely damaged by Cromwellian soldiers in 1646 and was almost entirely rebuilt in 1714. This gave it a more classical feel than a typical parish church, making it still more unusual in its countryside setting. 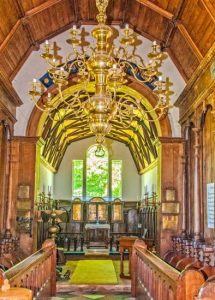 Inside, the pews face each other, more like a college chapel.

T.S. Eliot visited 290 years later in May 1936 and was moved to reflect upon the Church and its history in the last of his Four Quartets: Little Gidding. After it appeared in 1942, he published no more poetry and died in 1965.

The roadsides would have been lined, as they were on our visit, with cow parsley, and the hedgerows white with May hawthorn blossom. TS Eliot would have driven down the same rough road, and walked behind the brick-built pigsty, turning in front of the farmhouse to catch their first glimpse of the church façade and the table tomb of Nicholas Ferrar.

Taking the route you would be likely to take

From the place you would be likely to come from,

If you came this way in may time, you would find the hedges

White again, in May, with voluptuary sweetness.

It would be the same at the end of the journey,

If you came at night like a broken king,

If you came by day not knowing what you came for,

It would be the same, when you leave the rough road

And turn behind the pig-sty to the dull facade

And the tombstone. And what you thought you came for

Is only a shell, a husk of meaning

From which the purpose breaks only when it is fulfilled

If at all. Either you had no purpose

Or the purpose is beyond the end you figured

And is altered in fulfilment. There are other places

Which also are the world’s end, some at the sea jaws,

Or over a dark lake, in a desert or a city–

But this is the nearest, in place and time,

Now and in England.’

If you came this way,

Taking any route, starting from anywhere,

At any time or at any season,

It would always be the same: you would have to put off

Sense and notion. You are not here to verify,

Instruct yourself, or inform curiosity

Or carry report. You are here to kneel

Where prayer has been valid.

V We shall not cease from exploration

And the end of all our exploring

Will be to arrive where we started

And know the place for the first time.

Through the unknown, unremembered gate

When the last of earth left to discover

Is that which was the beginning;

At the source of the longest river

The voice of the hidden waterfall

And the children in the apple-tree