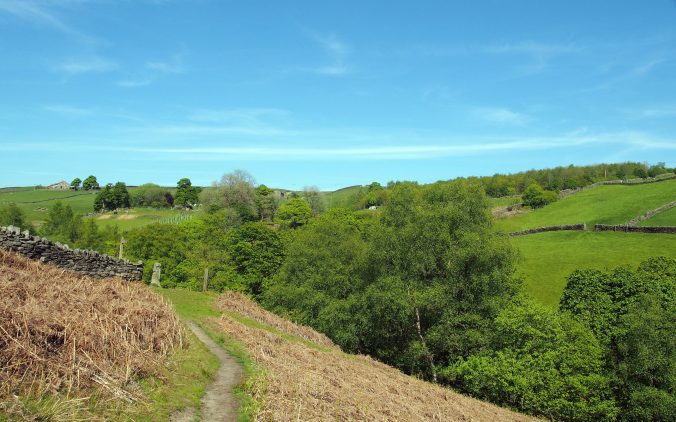 ‘A naturally evolved local organism, like a giant protozoa’

‘These early years anchored both of us up there for life’ 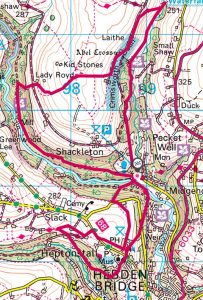 Ted Hughes grew up in the Upper Calder Valley and his poetry is firmly based in its moors and valleys. As a young boy he loved hunting and fishing with his elder brother Gerald and his early poetry, such as The Hawk in the Rain (1957), contains powerful imagery of the natural world.

Ted Hughes’ sharp perception of nature and its revelatory power was honed on these hunting trips with his brother. They rose before dawn to watch and wait, almost in a trancelike state of concentration, and when an animal appeared it would always be sudden and unexpected, making his hair stand on end. It was a kind of revelation, a moment of animism (think ‘Thought-Fox’).

Simon Armitage observes that ‘the anthropology, religion, natural history, and geography of the area’ provided Ted Hughes with ‘a model for nearly all of his future work’. Hughes himself referred to the Calder Valley as his ‘tuning fork’. His poetic style is perhaps best described as post-pastoral, rooted in the relationship between man and nature, both their creative and destructive elements. His poetry does not celebrate a pastoral idyll, but rather seeks a deeper truth through the allegory of nature.

In Hughes’ world, people, stone, and what he called ‘the mothers’, the sustaining elements of earth, air, fire, and water, were all conscripted by the industrialists as economic resources. In the early 1800s, the Calder Valley became the cradle for the industrial revolution in textiles, and the Calder became ‘the hardest-worked river in England’.

Ted Hughes thought of the land as a huge creature, harnessed by dry stone walls (‘harness on the long moors’), but as the Industrial Revolution played out gently shaking herself free of walls, chimneys, chapels, mills, and houses. In a letter he describes what fascinated him about the place: ‘The collision of the pathos of the early industrial revolution – that valley was the cradle of it – with the wildness of the place.’ ‘Remains of Elmet’ (1979), a collaboration with the photographer Fay Godwin, was a brilliant portrait of this shifting world. The book contains photos paired with vivid poems seeming to spring from a strangely imagined world of vast creatures, stone gods and huge dramas played out on a geological timescale.

Hughes said that the move to South Yorkshire when he was eight ‘really sealed off my first seven years so that now my first seven years seems almost half my life. I’ve remembered almost everything because it was sealed off in that particular way and became a sort of brain – another subsidiary brain for me’. Or as his brother Gerald said: ‘These early years anchored both of us up there for life.’

We start our walk from the car park in New Bridge and walk south to Heptonstall.

Heptonstall is perched on an exposed hill above Hebden. We visit the church where both Ted’s parents and his wife Sylvia Plath are buried. 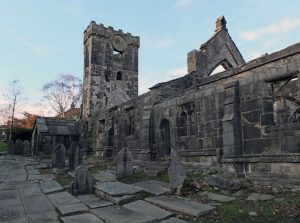 For him, this church was also a symbolic focal point of the Upper Calder Valley.

Its song put a light in the valleys
And harness on the long moors.

Its song brought a crystal from space
And set it in men’s heads.

Then the bird died.

Its giant bones
Blackened and became a mystery.

The crystal in men’s heads
Blackened and fell to pieces.

The valleys went out.
The moorland broke loose.’

A footpath runs down from the church into the steep wooded valley of Colden Clough, where tall mill chimneys poke through the trees by the banks of Colden Water. Astonishingly, thirteen mills were powered by this small river back in the nineteenth century.

Remnants of these mills and factory workings combine with woodland and a large mixture of wildlife to create a very special place. Ted Hughes’ poem ‘Chinese History of Colden Water’ describes it beautifully:

‘A fallen immortal found this valley –

On the shore of heaven.’ 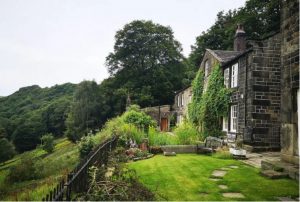 In 1969 Ted Hughes bought an eighteenth-century millowner’s house called Lumb Bank on the edge of this valley, with the intention of living here. But he soon tired of it as a place to live, and it became the Arvon Foundation, a base for creative writing courses. Ted Hughes gave regular readings there from the mid-1970s onwards. It is still going strong.

In 1952, whilst Ted was studying at the University of Cambridge, Hughes’ parents moved back to the Calder Valley, to The Beacon, a modest house on the south eastern side of Slack, with panoramic views and consequently often very windy! Hughes returned intermittently throughout the 1950s, bringing his wife Sylvia Plath to visit after their marriage in 1956. He wrote ‘Six Young Men’ here that year.

Ted and Sylvia stayed there for a few months in 1957 until their departure to America. Ted wrote of the ‘happy life Sylvia and I lead’, and of how, when they became ‘fed up’ of writing and critiquing each other’s work, they would ‘walk out into the country and sit for hours watching things’. 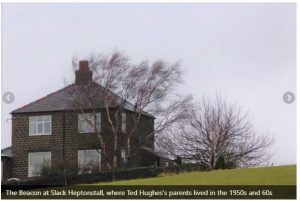 We see its exposed position facing west and the old-coal house on the east side is still there, protected from the prevailing wind.

‘This house has been far out at sea all night,

The woods crashing through darkness, the booming hills,

Winds stampeding the fields under the window

Floundering black astride and blinding wet

Till day rose; then under an orange sky

The hills had new places, and wind wielded

At noon I scaled along the house-side as far as

One of his more comic poems, ‘Football at Slack’, is also set in this tiny village:

Bounced, and their blown ball bounced.

And the valleys blued unthinkable

Under depth of Atlantic depression —

But the wingers leapt, they bicycled in air

And the goalie flew horizontal’ 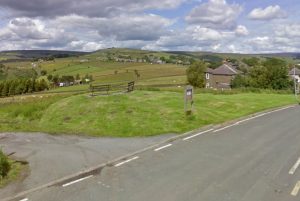 Ted grew up in a household overshadowed by the experiences of the First World War. His father was one of only seventeen survivors of a battalion of a thousand men massacred at Gallipoli. It became a preoccupation for him in his writing:

‘The big, ever-present, overshadowing thing was the First World War, in which my father and my Uncles fought…where a single bad ten minutes in no man’s land would wipe out a street or even a village.’

The ‘survivors’ are commemorated in the poem ‘Crown Point Pensioners’. The two benches on which they sit, on a mound of earth at Crown Point, are still here a few yards east along the road to Heptonstall, with the same stunning views across to Stoodley Pike:

Under the blue, widening morning and the high lark.

The map of their lives, like the chart of an old game,

Lies open below them.

… Singers of a lost kingdom.

The reverberations their fathers

We complete our first circuit and then head up Hardcastle Crags. 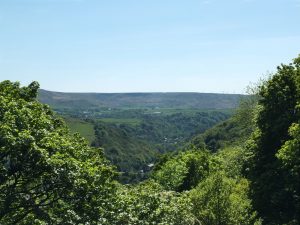 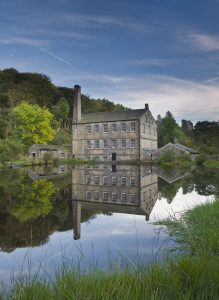 Gibson Mill, built around 1800, is situated in woodland beside Hebden Water. It was driven by a water wheel and produced cotton cloth up until 1890 when it closed.

Ted Hughes would no doubt be amused that today Gibson Mill has become a model for green living. It draws on the site’s natural resources including sunlight, spring water and wood, as well as its 1926 turbine and a log-burning stove, for hot water, electricity and heating.

Ted Hughes’ mother Edith had a great love of the countryside and introduced all her children to it through long walks. The crags were one of her favourite spots:

‘Think often of the silent valley, for the god lives there.’

In Hardcastle Crags, that echoey museum,

Where she dug the leaf mould for her handful of garden

And taught you to walk, others are making poems.

Between thumb and finger.

The clogs twanging your footsoles, on the street’s steepness, 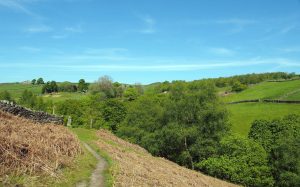 Our route then cuts across the moor over Turn Hill. Feeling very small in the landscape, we are reminded of Ted Hughes’ lines:

Are a stage for the performance of heaven.

Any audience is incidental.’ 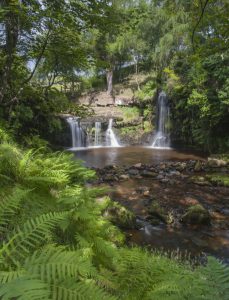 At Lumb Bridge, we spot a plaque commemorating the poem ‘Six Young Men’, which was inspired by an old photograph taken at this spot of six young men who were all soon to lose their lives in the war. 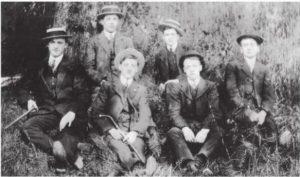 ‘All are trimmed for a Sunday jaunt. I know

That bilberried bank, that thick tree, that black wall,

Which are there yet and not changed. From where these sit

You hear the water of seven streams fall

To the roarer at the bottom, and through all

The leafy valley a rumouring of air go.

Pictured here, their expressions listen yet,

And still that valley has not changed its sound

Though their faces are four decades under the ground.’

A moment of pure linkage between poem and place, it takes our breath away. 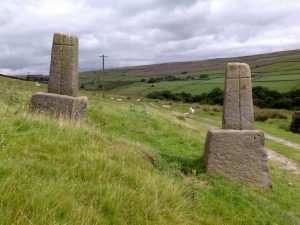 Abel Cross, ‘where the Mothers/Gallop their souls/Where the howlings of the heaven/Pour down onto earth,’ comprises two marker stones locally nicknamed ‘Mourning & Vanity’. Dating back to mediaeval times, these wayside crosses served both to reinforce the Christian faith in travellers, but also as way-markers or boundary markers. 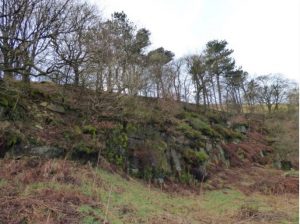 At the southwest end of Hirst Fields is an old quarry.

This is the very spot where Ted camped for three days with his brother Gerald: ‘It was in Crimsworth Dean, camping on that level first. Beside what’s now a council stone dump under a little cliff beside the lane going up, in around 1937 or earlier, that I had the dream that turned later into all my writing. A sacred space for me.’ 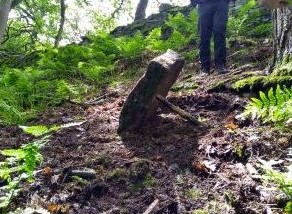 The short story ‘Deadfall’ recounts this dream, in which Ted awakens in the tent at night to be led to a fox caught in a deadfall trap by its spirit in the form of an old woman. In the morning Gerald and Ted found a fox in a real trap nearby. The deadfall can still be seen at the foot of a pine tree near the top of the wood. The story begins:

‘Camping is mainly about camp-fires, food cooked on camp-fires, and going to sleep in a tent. And getting up in the wet dawn. We planned to get up at dawn, maybe before dawn, when the rabbits would be dopey, bobbing about in the long dewy grass. Our precious, beautiful thing, my brother’s gleaming American rifle, lay in the tent, on a blanket.’

‘The Horses’ is a recollection of one of those ‘before dawn’ experiences, getting up and scrambling up out of the trees and into the field beyond Shackleton:

‘I climbed through woods in the hour-before-dawn dark.

A world cast in frost. I came out above the wood

Where my breath left tortuous statues in the iron light.

But the valleys were draining the darkness

Till the moorline – blackening dregs of the brightening grey –

Halved the sky ahead. And I saw the horses:

Huge in the dense grey – ten together –

Megalith-still. They breathed, making no move,

with draped manes and tilted hind-hooves,

I passed: not one snorted or jerked its head.

Of a grey silent world.

I listened in emptiness on the moor-ridge.

The curlew’s tear turned its edge on the silence.’

We return to our start point and are suddenly jolted back into the contemporary world. Or not quite. We finish with a pint at the Stubbing Wharf, between the river and the canal, where Ted Hughes had sat with Sylvia in 1959 when she was pregnant with their first child, pondering where they might live. This is how his poem ‘Stubbing Wharfe’ begins;

‘Between the canal and the river

We sat in the gummy dark bar.’

In just a few hours we too feel anchored to this extraordinary place!