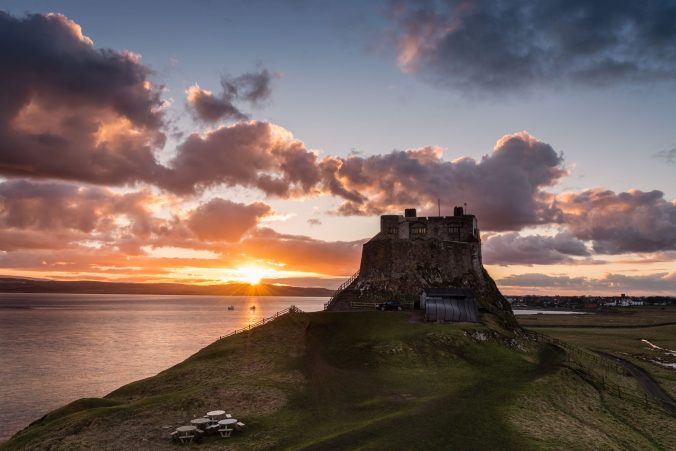 ‘As the tide ebbs and flows, this place is surrounded twice daily by the waves of the sea like an island and twice, when the shore is left to dry, it becomes again attached to the mainland.’ Saint Bede, 8th century 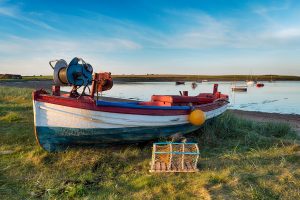 It is Lindisfarne’s history and setting that makes it so magical and inspiring. It was an important centre of Celtic Christianity as early as the seventh century. On the island today lie the ruins of the monastery and a small castle dating back to the sixteenth century and re-modelled by Lutyens at the start of the twentieth.

At some point in the early eighth century, the famous illuminated manuscript known as the Lindisfarne Gospels, a Latin copy of the Gospels, was created here, and the artist was possibly Eadfrith, who later became Bishop of Lindisfarne. Sometime in the second half of the tenth century a monk named Aldred added an Anglo-Saxon gloss to the Latin text, producing the earliest surviving Old English copies of the Gospels. This is one of the seminal books in the bibliographical history of our islands, the equivalent to the Book of Kells in Ireland.

Lindisfarne has inspired much creativity

‘…The tide did now its flood-mark gain,

And girdled in the saint’s domain:

For, with the flow and ebb, its style

Varies from continent to isle;

The pilgrims to the shrine find way;

Twice every day, the waves efface

Of staves and sandalled feet the trace.’

LJ Ross was brought up in the Northumberland and has become a best-selling writer with her DCI Ryan mysteries. Her debut novel ‘Holy Island’ (2015) is set here, a place she knew well from childhood. She explained her inspiration:

‘It’s a lovely place to visit, very beautiful and remote, which provided the perfect inspiration for me to write Holy Island, my murder mystery novel of the same name.’

‘Shadow Script’ (2013) a collection of twelve poems by poets resident in the north-east includes the ‘Long Wave’ by Sean O’ Brien:

‘Whether you stay or go, you hear

The water brushing at the threshold

And the long wave comes and carries you –

The island has also inspired musicians. Lindisfarne, an English folk-rock band from Newcastle and one of the most successful folk-based rock bands in the 1970s, named themselves after the island: ‘It’s a very special place, cut off by the tide and a great place to get away from it all. It has a really peaceful quality, and our music seems to belong there.’

Courtney Pine said his visit to Holy Island was ‘inspirational’ and altered his usually urban-influenced composing. He was moved by the ‘stillness and calmness of the island’.

Painters have been intrigued by the natural beauty and ancient buildings of the island. Thomas Girtin painted the castle, Turner painted the ruins of the priory, and Charles Rennie Mackintosh visited the island on honeymoon in 1900, making several drawings of Lindisfarne Castle, at almost the same time that Lutyens would have been drawing up his plans to remodel it. 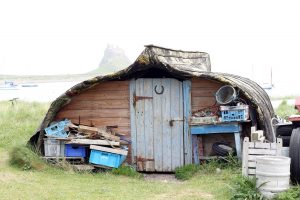 Like saints, monks and pilgrims before us, we choose to walk along the ancient route to the island that anyone visiting the island had to follow for centuries, until the 1950s when the causeway road was built. The Pilgrims’ Way is marked out by poles in the sand (also shown on the OS map) and is more direct than the causeway road.

Opposite the refuge, we peer diagonally across to our right and see the line of poles stretching into the distance. We find a safe place to leave the road onto the sands and head towards the first pole.

Along the way, we pass two pedestrian refuges, there for anyone who is caught out by the tides.

As we approach the island, we see the top of the priory. In LJ Ross’s words:

‘Above the village the Priory loomed, crippled but still standing after a thousand years…its walls towering around her like black fingers against the ink-blue sky…’ 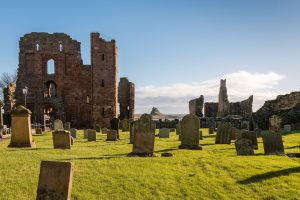 Beyond the village is the castle, looking out onto the North Sea.