‘Show me the exact place where Louisa Musgrove fell!’

LYME REGIS AND THE COBB 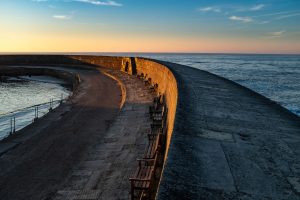 Lyme Regis’ Cobb, or harbour wall, dates back at least to the fourteenth century, with numerous improvements and repairs over the centuries. It is curved protectively, like a muscular arm, around the harbour of pretty fishing boats.

‘It is quite simply the most beautiful sea rampart on the south coast of England. And not only because it is, as the guidebooks say, redolent of seven hundred years of English history, because ships sailed to meet the Armada from it, because Monmouth landed beside it … but finally because it is a superb fragment of folk art. Primitive yet complex, elephantine but delicate; as full of subtle curves and volumes as a Henry Moore or a Michelangelo; and pure, clean, salt, a paragon of mass.’

By the beginning of the nineteenth century, Lyme Regis had become a fashionable resort for summer visitors. Jane Austen visited with her family in 1804, walking on the Cobb, dancing in the Assembly Rooms and bathing from a bathing machine.

Chapters 11 to 14 of ‘Persuasion’ (1818) are set here. The protagonists arrive in November, and the description of the out-of-season town is still recognisable to a winter visitor:

‘After securing accommodations, and ordering a dinner at one of the inns, the next thing to be done was unquestionably to walk directly down to the sea. They were come too late in the year for any amusement or variety which Lyme, as a public place, might offer. The rooms were shut up, the lodgers almost all gone, scarcely any family but of the residents left; and, as there is nothing to admire in the buildings themselves, the remarkable situation of the town, the principal street almost hurrying into the water, the walk to the Cobb, skirting round the pleasant little bay, which, in the season, is animated with bathing machines and company; the Cobb itself, its old wonders and new improvements, with the very beautiful line of cliffs stretching out to the east of the town, are what the stranger’s eye will seek; and a very strange stranger it must be, who does not see charms in the immediate environs of Lyme, to make him wish to know it better.’

Like the poet Alfred Lord Tennyson who himself arrived in the town and famously proclaimed ‘show me the exact place where Louisa Musgrove fell!’, we make our way to The Cobb to do just that. 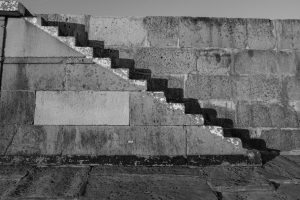 ‘There was too much wind to make the high part of the new Cobb pleasant for the ladies, and they agreed to get down the steps to the lower, and all were contented to pass quietly and carefully down the steep flight, excepting Louisa; she must be jumped down them by Captain Wentworth. In all their walks, he had had to jump her from the stiles; the sensation was delightful to her. The hardness of the pavement for her feet, made him less willing upon the present occasion; he did it, however. She was safely down, and instantly, to show her enjoyment, ran up the steps to be jumped down again. He advised her against it, thought the jar too great; but no, he reasoned and talked in vain, she smiled and said, “I am determined I will:” he put out his hands; she was too precipitate by half a second, she fell on the pavement on the Lower Cobb, and was taken up lifeless! ‘Persuasion’, Chapter 12

We try to re-enact the scene as a selfie; and went for the set of steps just beyond the Granny’s Teeth’ steps as the local experts assure us it was these ones.

John Fowles moved to Lyme Regis in 1965, buying Underhill Farm, in the Undercliff west of Lyme. He started The French Lieutenant’s Woman the following year, setting it in the town a hundred years earlier (1867). In 1969 he moved to Belmont House in the town itself.

Walking one day along the Cobb, Fowles was struck by the sight of a woman who ‘stood motionless, staring, staring out to sea’. The French Lieutenant’s Woman was born:

‘It stood right at the seawardmost end, apparently leaning against an old cannon barrel upended as a bollard. Its clothes were black. The wind moved them, but the figure stood motionless, staring, staring out to sea, more like a living memorial to the drowned, a figure from myth, than any proper fragment of the petty provincial day.’ This turns out to be the heroine of the book, Sarah Woodruff.

This scene was immortalised in the 1981 film, with Meryl Streep playing the part of Sarah Woodruff, in a black cloak on a wind-whipped jetty staring wildly out to sea.

The Cobb is the repository of history, of romance and longing, of life itself, speaking to us from the past and into the future. 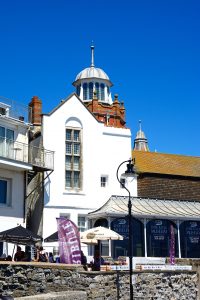 Take a Look at: Lyme’s other literary and artistic connections at https://www.lymeregismuseum.co.uk/collection/lymes-literary-artistic-connections/

Take: a 5 ½ mile walk around the surrounds of Lyme Regis. Map and route at https://www.walkingbritain.co.uk/walk-2771-description

Take: the 7-mile hike along the SW Coat path from Lyme Regis to Seaton, passing along the Undercliff, appreciated by John Fowles thus: ‘I treasure it for its solitude, its silences, its sheer beauty, its exuberance of growth.’ Pass by Underhill Farm with its rusty corrugated iron roof. Catch a bus from Marine Place, Seaton back to Lyme Regis.