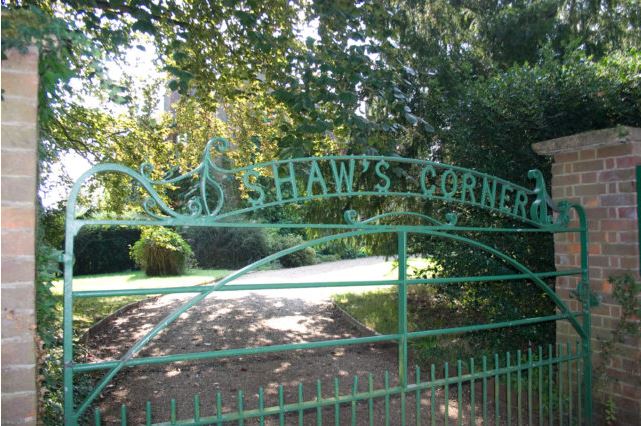 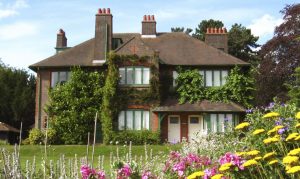 Shaw’s Corner was George Bernard Shaw’s home for over 40 years, from 1906 to his death in 1950; and because he left his estate to the National Trust, much of the house is preserved just as he left it, making it easy to imagine his life there. The house is designed in the Arts & Crafts style which, combined with the fact that he was a friend of William Morris, means that there is much of architectural and design interest too.

We discover as we look around the house that George Bernard Shaw was a fabulously interesting person – a prominent member of the Fabian Society, teetotal and vegetarian, co-founder of the London School of Economics, pacifist, holder of both a Nobel prize and an Oscar, and of course a voracious writer, most famously of plays. A veritable polymath.

He was also a deeply influential friend and supporter of poets, painters and playwrights, adventurers, actors and explorers 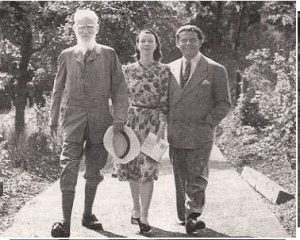 (this picture shows him with Vivien Leigh and Laurence Olivier). Writers he fraternised with included Yeats, Virginia Woolf and TE Lawrence, who was a regular visitor to the house. 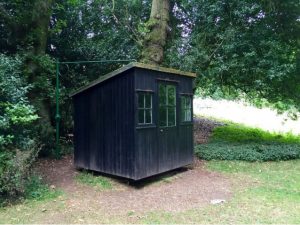 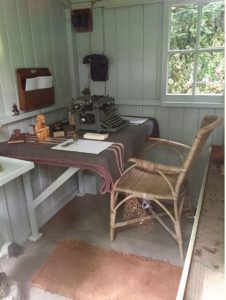 We stroll to the bottom of the garden to discover one of the most famous garden sheds – Shaw’s Writing Hut. It was mounted on a revolving mechanism so that as he worked, Shaw could follow the sun throughout the day. Tucked away behind trees, Shaw dubbed the hut ‘London’, so that unwanted visitors could be told he was away ‘visiting the capital’. He wrote many of his major works here, including some of his most famous plays Pygmalion, St Joan and Major Barbara.

Shaw saw the importance of taking daily exercise (we see his exercise bike in the house) but was reluctant to venture beyond the gates of his house, so he and his wife Charlotte walked around the garden, marking the number of laps they had completed with pebbles placed on a windowsill until they had walked the required distance of one mile. We try out the experiment and find we need five pebbles (five added and then removed one by one, which was the way they did it), so ten circuits altogether.

After Shaw’s and his wife’s deaths, their ashes were scattered along the footpaths and around the statue of Saint Joan where we have just walked.