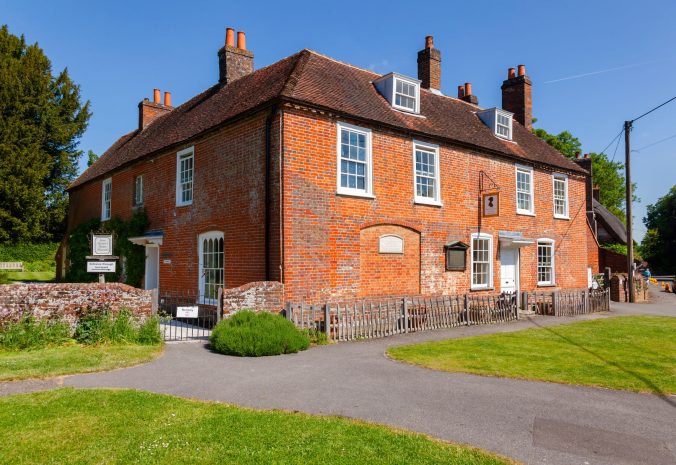 ‘Our Chawton home, how much we find

Already in it to our mind;

And how convinced that when complete

It will all other houses beat

That ever have been made or mended

With rooms concise or rooms distended’ 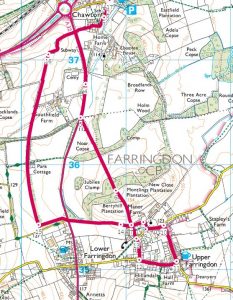 Chawton Cottage is the only one of Jane Austen many homes that both survives and is open to the public. She lived there from 1809 until her death in 1817, and it is the place most associated with her writing, where she revised earlier drafts of her work and wrote three new novels, Mansfield Park, Emma and Persuasion.  Claire Tomalin, a biographer, writes, ‘It was as though she were restored to herself, to her imagination, to all her powers: a black cloud had lifted.’ It was in this modest brick-built house that her genius reached its fruition.

For Chawton came after five years of insecurity and anxiety for Jane, her mother and sister Cassandra. On the death of Jane’s father in 1805, they had been left in a precarious financial position in Bath. During this period, Jane’s writing had come to a virtual stop.

Then a fortuitous offer came from Jane’s eldest brother Edward. As a boy, he had been adopted by a wealthy distant relative, Thomas Knight. Now Edward had come into a substantial inheritance and early in 1809, and he immediately offered his mother and sisters the use of a large cottage rent-free on his estate at Chawton. 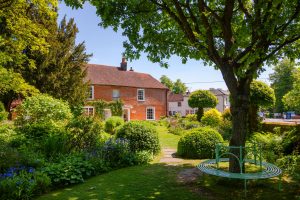 Jane felt very settled personally and socially here. And she loved the rural environment. She took up gardening with glee. In an 1811 letter, she writes, ‘You cannot imagine – it is not in human nature to imagine – what a nice walk we have round the orchard. The row of beech look very well indeed’. And her sense of humour never let her down: ’I will not say that your Mulberry trees are dead, but I am afraid they are not alive,’ she wrote to her sister Cassandra from this house in May 1811.

After writing for most of the morning, her typical pattern was to go for a walk in the afternoon, with her sister Cassandra or a friend. This was a time for conversation and reflection, perhaps a chance to work through plots in her mind.

Her niece wrote: ‘After luncheon, my Aunts (Jane & Cassandra) generally walked out . . . to make a visit- or if the house (Chawton House) were standing empty they liked to stroll around the grounds- sometimes to Chawton Park – a noble beech wood, just within a walk.’

Throughout the novels, Jane Austen reveals her own love of walking and the freedom it provides, especially to a woman of the period. In Northanger Abbey Catherine’s choice of walk is to the dramatic natural scenery of Beechen Cliff in Bath. In Sense and Sensibility, Marianne is a great lover of the natural beauty of walks and wildflowers. In Emma, Mr Knightly is so fond of country walks that he seldom uses his carriage. In Persuasion, Mary Musgrave declares ‘I am very fond of a long walk’ and Anne Elliot tells Captain Wentworth, ‘I walk. I prefer walking’.

Talking of which, let’s get going…

“…and the plan is that we should all walk with her to drink tea at Faringdon” Letter to Cassandra, 29 May 1811

We start with a tour of Chawton Cottage (Jane Austen’s House Museum), which has much Austen memorabilia. We are especially taken by the battered tiny twelve-sided wring desk by the window, the squeaky door that warned Jane of people coming to disturb her, and seeing first-hand the generous flowing handwriting of her letters and manuscripts.

In ‘Sense and Sensibility’, the circumstances of the widowed Mrs Dashwood, living in a cottage on the estate of a rich relative, echoed Jane’s situation here, and Barton Cottage closely resembled their Chawton house:

‘As a house, Barton Cottage, though small, was comfortable and compact; but as a cottage it was defective, for the building was regular, the roof was tiled, the window shutters were not painted green, nor were the walls covered with honeysuckles.’

A very fair description of what we find ourselves looking at. 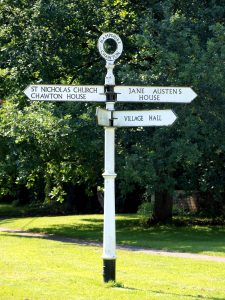 We head south out of the village to St Nicholas’ Church. In the churchyard, the graves of Jane Austen’s mother and sister, Cassandra, can be found around the back of the church. The building is Victorian, for the church was rebuilt in 1871 after a disastrous fire. (Jane herself is buried at Winchester Cathedral).

We look up towards Chawton House, always referred to by Jane as the ‘Great House’ which her brother Edward owned. He had taken the name of Knight in 1812 to ensure that he inherited the estate at Chawton from distant relatives. Jane often visited the house: ‘Aunt Cass: & I dine at the Gt House today. We shall be a snug half dozen.’

Then we continue heading south along a footpath that takes us alongside the Lavant Stream, one of the sources of the River Wey, somewhat intermittent in flow and prone to flooding. Jane Austen wrote of it as ‘a fine running stream’ and ‘it is nothing but what beautifies us and does to talk of’. 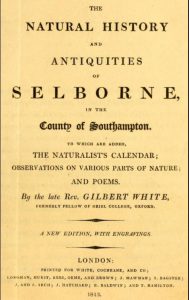 We reach the village of Farringdon, where Gilbert White, the ‘parson-naturalist’ and author of ‘The Natural History and Antiquities of Selborne’, was curate from 1761 to 1784.

But it is the Rev. John Benn, who held the living of All Saints’ from 1797 to 1857, who claims our interest here, for his family were particular friends of the Austens and there was much visiting between the two villages. Jane writes in one of her letters: ‘Harriet Benn sleeps at the Great House to-night and spends tomorrow with us, and the plan is that we should all walk with her to drink tea at Faringdon’. They would have taken exactly the same route that we have just taken.

We head back along a disused railway line across fields. Looking out to our left just after Southfield farm is the site of Wood Barn, a small, isolated farm (where the W for well sign is on the map). In Jane Austen’s time, the farm provided poultry for the table, as Jane recorded in a letter to her sister Cassandra: ‘We shall have pease soon – I mean to have them with a couple of Ducks from Wood Barn…’

As we approach Chawton again, where the Winchester road joins the Gosport road, we pass thatched cottages on our left, called the Pond Cottages. In one of these cottages lived William Littleworth, a manservant of the Austens.  Here was once a considerable pond, which in ‘sad weather’ induced Jane to write rather dismally: ‘Our Pond is brimfull and our roads are dirty and our walls are damp, and we sit wishing every bad day may be the last.’ However, the days themselves were not dull, as she ends the letter with: ‘We have had a great deal of fun lately with Post-chaises stopping at the door; three times within a few days, we had a couple of agreeable Visitors turn in unexpectedly…’

Visit: Chawton House. The 400-year-old house is now home to the Chawton House Library, a charitable centre for the study of Early English Women’s Writing, with a collection of over 9,000 books, including first editions of Jane Austen, Mary Astell’s ‘A Serious Proposal to the Ladies’ (1694) and Mary Wollstonecraft’s ‘A Vindication of the Rights of Woman’ (1792).

Watch: The documentary Jane Austen’s True Home: A Life in Hampshire at https://www.youtube.com/watch?v=JTh7f12qr14