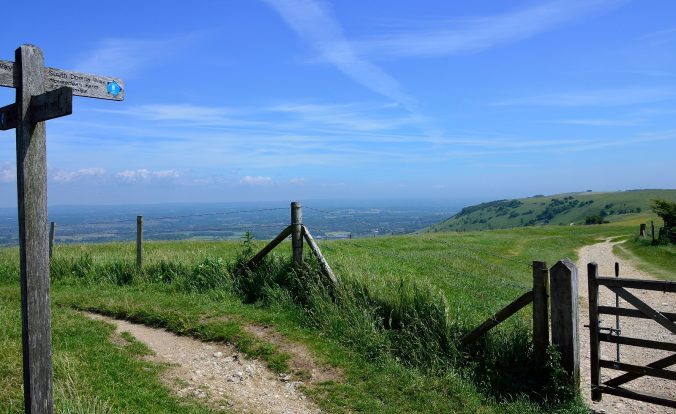 ‘It will be our address for ever and ever’

‘’Why not stay here forever and ever enjoying this immortal rhythm, in which both eye and soul are at rest?’ 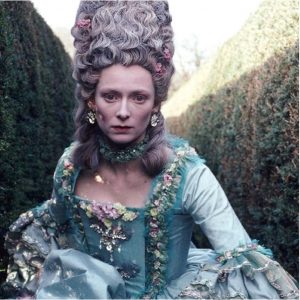 The inspiration for this walk…Orlando (1918)

Sometimes a performance and a moment can transform your appreciation of a novel; and just such a thing happened to me with great force in the film Orlando, where Orlando, played by Tilda Swinton, enters a maze as a woman and exits in the next century as a man. It perfectly captures the spirit of the book, the first English language trans novel. And subsequently reading the novel again, one is dazzled by Virginia Woolf’s prose, I gasp with admiration.

For Virginia Woolf, walking and writing were inseparable and living on the South Downs enabled her to do both to her heart’s content. It was here that she wrote many of her most famous novels including ‘Mrs Dalloway’, ‘To the Lighthouse’, ‘Orlando’ and ‘The Waves’.

Walking was intrinsic to her creativity and mental well-being: ‘I am extremely happy walking on the downs… I like to have space to spread my mind out in’. After her morning’s work, she would typically take a long stroll up onto the downs, during which she would formulate what was to come next in the book she was working on, or as she put it ‘I go along nosing along making up phrases’.

Life was generally settled when she was at Rodmell. As she put it: ‘I slip easily from writing to reading with spaces in between of walking’. Walking often calmed her mental state: ‘I went out to walk myself serene’.

We start from the tiny Southease Station. Virginia often took this exact route up along the South Downs to see her sister Vanessa Bell at Charleston Farmhouse further to the east. This is the route we are taking today. We make an early start, and there is sea mist obscuring our view, with the sun trying to poke through. Suddenly as we reach the top, the sun comes out and the views open up magnificently, south to Newhaven and north to the castle of Lewes, quite spellbinding. 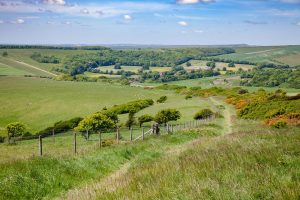 From the top of the beacon, we get a fabulous view of the sea. As Virginia Woolf commented, perhaps thinking of this spot, ‘Hills only exist to provide a wide view from them of the sea, the horizon, and one or two ships between’. This delightful view pretty much fits the bill. 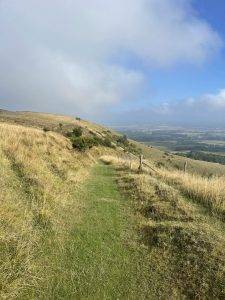 Coming off the side of the South Down is often one of the most beautiful bits, as the vegetation and trees multiple and the scene becomes less bare. This was no exception.

This is where the economist Maynard Keynes (a member of the Bloomsbury Group) and his Russian ballerina wife, Lydia Lopokova, lived for many years. As well as her dancing, Lydia had a way with love letters to her husband: ‘My further utterings contain no words but a widespread kissing on your attractive eyes,’ wrote Lopokova, signing off: ‘Your lively vitamin’. 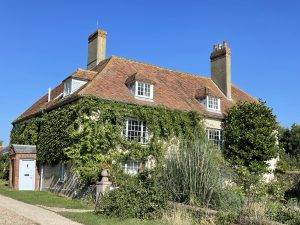 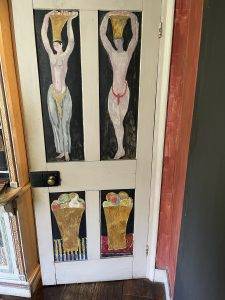 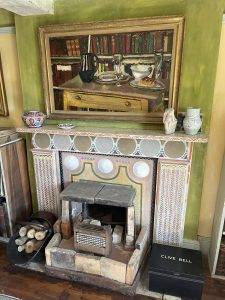 At Charleston, that approach meant, among other things, that the house itself became a canvas for experimentation in decorative art – hand-painted wallpapers and door panels, brightly coloured fabrics and furniture, lamp bases made from chunks of telegraph poles, all of which we admire on our visit.

We found the experience of looking around the house totally exhilarating – just about anything and everything is painted, and everywhere there is evidence of the lives that were lived here with half-used paint tubes, old telephone directories and the first edition of Keynes 1920 booklet ‘The Economic Consequences of the Peace’ in his bedroom. This is a place that fills the heart with a wish to be creative and to share one’s creativity with others in a joint endeavour.

And the garden is exquisite too, carefully planned and full of charm at every turn. As Vanessa Bell commented about it: ‘I often wander about in it at odd moments for the pleasure of the sights & smells. How heavenly all the smells & colours & clean easiness of life seems to me!’ 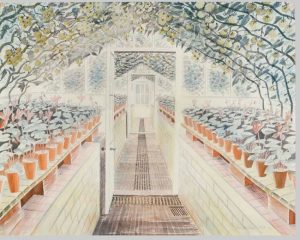 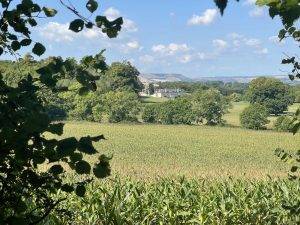 The glasshouse here was the inspiration for one of Eric Ravilious’ well-known drawings, The Glasshouse (more about him in a bit).

Perhaps less known is that this is where the greengage fruit originated, first imported from France in 1724 by Sir William Gage, 7th Baronet, from whom they derive their English name. 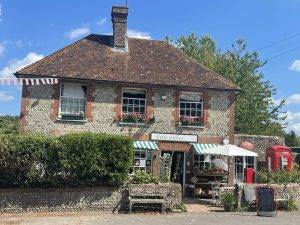 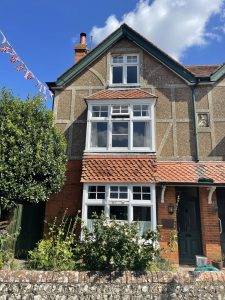 It would be hard to conjure up a prettier village than West Firle, with a busy village shop, church and pub. There is also so much variety in the architecture, cottages from all eras and larger houses too along the main street. We continue walking up the village street to the village hall and spot Little Talland House on our right, where Virginia Woolf lived from 1911-1912. The wood just to the east of the village was a favourite spot for her:

‘What I wouldn’t give,’ she wrote a few years later, ‘to be coming home through Firle woods, dusty and hot, with my nose turned home, every muscle tired and the brain . . . so sane and cool and ripe for the morrow’s task.’

The graves of Vanessa and Quentin Bell and Duncan Grant are quite close to the wall on the north side of the churchyard. 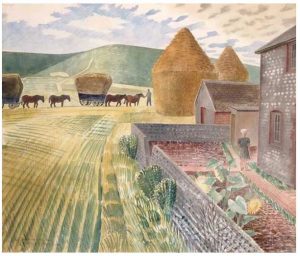 Not strictly part of our Virginia Woolf story, but our path takes us within a hundred yards or so of the Furlongs, where the artist Eric Ravilious frequently stayed. Like Virginia, he was especially inspired by the landscape of the South Downs. He said that his time here ‘altered my whole outlook and way of painting, I think because the colour of the landscape was so lovely and the design so beautifully obvious.’ Many of his landscape paintings were painted and inspired by this stretch of land. When he visited here, he felt ‘he had come to his own country’.

Just to our right, before we descend the hill again to Southease we see an old landfill site, previously a cement work which in turn had engulfed Asham House, where the Woolfs lived from 1912-1919 until they moved to Monk’s House. 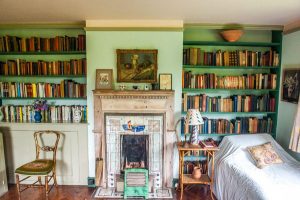 Passing through Southease, we reach Rodmell and Monk’s House, Virginia and Leonard Woolf’s much-loved home from 1919 until she took her life in 1941.

Writing to friends, Virginia announced: ‘Our address will be Monk’s House; the point of it is the garden, I shan’t tell you though, for you must come and sit there on the lawn with me, or stroll in the apple orchard, or pick – there are cherries, plums, pears, figs, together with all the vegetables. This is going to be the pride of our hearts, I warn you.’ 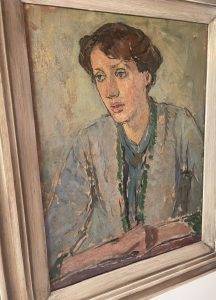 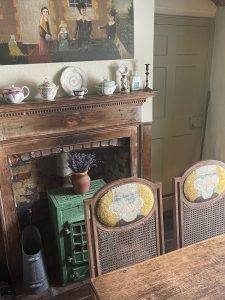 We do just as she says and feel the ‘spirit of the place immediately. Much more of an ‘everyday’ home than the exotic Charleston, it would be easy to imagine living here, especially if you are a keen gardener. We were especially taken by the lean-to conservatory full of indoor plants.

Virginia’s garden study is one of the most evocative of retreats. She needed complete separation from the domestic in order to concentrate on her work – as she put it ’I like to have space to spread my mind out’. Her ‘lodge’ was built at the very end of the garden. Its French windows open out onto a view across the Ouse Valley to Mount Caburn and its fort, and The Downs, ‘which turn from green to blue, like opals’ in the evenings. They ‘look so lovely this evening, from my garden room, with the low barns that always make me think of Greek temples.’ Ah yes, those Greek temples are still there… 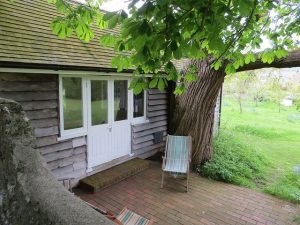 According to Leonard, Virginia was very disciplined about working, making the journey across the garden ‘with the daily regularity of a stockbroker’. She wrote the first drafts of her novels in longhand, sitting in a low armchair. Then she would decamp to the desk to type up what she had written. Revisions were often undertaken in the bath or on her long afternoon walks. A gate leads to the water meadows ‘where all nature is to be had in five minutes’.

It was here in 1941 that, tragically, Virginia Woolf came to drown herself in the river, having filled her coat pockets with heavy stones.

Jan Morris wrote in ‘Travels with Virginia Woolf, ‘that when she came to end her life, she should do so in the water of the English river that ran within sight of her house, among the Sussex landscapes that she loved; the human spirit immersed at the end in spirit of place’. 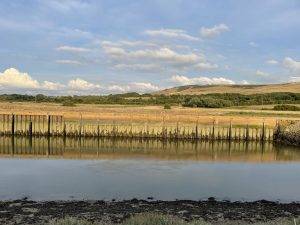 We pass Asham Wharf on the opposite bank of the river, from where her body was retrieved. A sombre moment and a time to reflect on the life of a truly great writer. 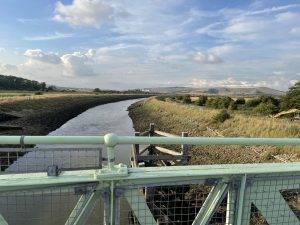 Back over the historic swing bridge, and our chapter is closed for the day.

Attend: The Charleston Festival, May www.charleston.org.uk

Visit: Berwick Church, where there are remarkable murals by Duncan Grant, Vanessa Bell and her son Quentin.