‘You hear the grating roar

Of pebbles which the waves draw back and fling

At their return, up the high strand’

Dover Beach is not necessarily where you’d choose to take the family for a day out. The harbour area itself is rather overwhelmed by the cross-channel ferry business. And, horror of horrors, the beach is pebbly, no sand anywhere, beware the family will complain!

But arguably it’s these very pebbles that inspired one of the most recited poems ever, Dover Beach. Written as a ‘honeymoon poem’ shortly after Matthew Arnold’s marriage in 1851, it was not published until 1867.

The beach, the shingle and the waves are the structures on which the thoughts of the poem sit and are connected, moving seamlessly from the personal (love, honeymoon) to the public realm (religion – ‘the sea of faith’, the human condition).

The opening stanza brilliantly evokes the romantic, night-time atmosphere of a quiet beach, something we have all experienced in our lives, probably more likely on the Aegean like Sophocles! The sound of the tide on the pebbles and the sheen of the moon on the water is beautifully captured in the first stanza.

The sea is calm tonight,
The tide is full, the moon lies fair
Upon the straits; on the French coast the light
Gleams and is gone; the cliffs of England stand
Glimmering and vast, out in the tranquil bay.
Come to the window, sweet is the night air!
Only, from the long line of spray
Where the sea meets the moon-blanched land,
Listen! You hear the grating roar
Of pebbles which the waves draw back and fling
At their return, up the high strand,
Begin, and cease, and then again begin,
With tremulous cadence slow, and bring
The eternal note of sadness in.

Sophocles long ago
Heard it on the Aegean, and it brought
Into his mind the turbid ebb and flow
Of human misery; we
Find also in the sound a thought,
Hearing it by this distant northern sea.

The Sea of Faith
Was once, too, at the full, and round earth’s shore
Lay like the folds of a bright girdle furled.
But now I only hear
Its melancholy, long withdrawing roar,
Retreating to the breath
Of the night-wind, down the vast edges drear
And naked shingles of the world.

Ah, love, let us be true
To one another! for the world, which seems
To lie before us like a land of dreams,
So various, so beautiful, so new,
Hath really neither joy, nor love, nor light,
Nor certitude, nor peace, nor help for pain;
And we are here as on a darkling plain
Swept with confused alarms of struggle and flight,
Where ignorant armies clash by night. 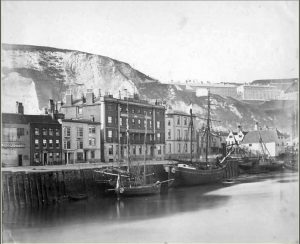 Head to Dover Beach, Waterloo Cres, CT17 9BT. Ideally, you need to go when it’s dark and there’s a moon, but this might not be to your taste…

The Arnolds stayed at the Ship Hotel on Custom House Quay (Strond St). Marshal Blücher stayed here in 1814. The Duke of Wellington was carried shoulder high to the Inn when he returned from the low countries following Waterloo in 1815. Lord Byron stayed here before he left England for the last time in 1816 to escape debts. Sadly the hotel no longer survives, nor any of the other buildings along the street, eaten up by the roadway and port.